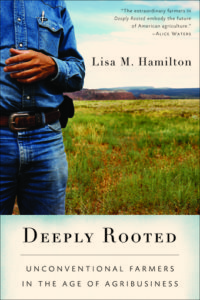 In her new book, “Deeply Rooted: Unconventional Farmers in the Age of Agribusiness,” journalist and photographer Lisa M. Hamilton takes your hand and leads you down the life path of three unique characters who share one commonality: a passion for stewardship of the land. Hamilton spent two years profiling three families in rural America who are fighting against the groundswell swallowing up farms that are forced to get big, or get out. Her eye for detail of place and people at odds with industrial agriculture is astute and compelling, and she draws the reader into the quiet lives of Americans slowly changing the system. With advanced praise from the incomparable Wendell Berry, this is a must-read book for those who care about the future of farming in America.

In Sulphur Springs, Texas, Hamilton spends times with Harry Lewis, an African-American dairyman who plays David to the Goliath of agribusiness corporations. The loquacious Lewis, who had forsaken his family farm as a young man, is now an unlikely outspoken advocate of organic milk production. Lewis tells Hamilton, “Imagine if people saw where their milk normally comes from. Imagine if people visited a big, concrete dairy. You know what I call that kind of dairy. I call it a penitentiary.” Lewis knows his dairy is different and the difference is pasture. “The word pasture must be practiced,” he says. “And if it’s not practiced, it’s not pasture. And it’s not Godly created.” Lewis, firm in his belief that God and green pasture are one in the same, knows this will put “farming back like it’s supposed to be.”

Hamilton travels from Lewis’s godly pasture to bare dirt and concrete in New Mexico, where dairy has become that state’s top agricultural commodity, but not before reminding us of how we got here. Southern California, once the nation’s top dairy-producing area, “changed the scale of dairy farming by building a system that had no natural limits,” writes Hamilton. “The new ‘Los Angeles-style’ dairies were being built on the very philosophy of capitalization…The dairy industry never looked back.”

Hamilton explains how the spike in production from industrial-scale operations unavoidably changed the dairy economy; plunging milk prices are making business tough for dairy farmers everywhere. Her profile sheds light on how farmers like Lewis, with his commitment to organic farming, as well as support of a cooperative of family farmers, might be able to fix this broken system.

From Texas, Hamilton travels to Abiquiu, New Mexico where we meet Virgil Trujillio, a rancher whose roots there go back 10 generations. His ancestors once owned 40,000 acres, but land changed hands, and it now houses a retreat called Ghost Ranch. In an ironic twist of fate, Trujillo is now “Ranchlands Manager” at Ghost Ranch, but in his heart, he refers to himself as a “stockman,” raising livestock which graze on other people’s land.

“It’s a common story among people in agriculture, that the life they watched their parents and grandparents live is simply unavailable to them,” Hamilton writes, chronicling the odds facing Trujillo and his dream to become a full-time rancher. She deftly describes his efforts which put him at odds with his neighbors, environmentalists (“he has an allergic reaction to the Sierra club”) and his fellow ranchers: “[H]is vision is to trust in the experience of people who have live on and worked with the land for their whole lives, and invest in the creativity that can come from their knowledge.”

Hamilton’s last stop is LaMoure, North Dakota, where she introduces us to David Podoll, who in 1974 set out to prove organic agriculture wrong, but whose own research convinced him to convert his family farm to organic. The Podolls had raised turkeys for four decades, but economies of scale had ended that operation, and they began to grow and save vegetable seeds.

Podoll’s agricultural system is “enduring” rather than “organic” or “sustainable.” “It’s a matter of morality—artfulness and care rather than forceful imposition of will,” Hamilton writes of Podoll. “He believes that this approach to breeding is the basis of an agriculture that will endure past the oil age. This, in fact, is what will feed the world.”

While their neighbors were embracing a sort of “personal Manifest Destiny” to grow big, the Podolls designed their business so it could stay small and they can grow food for themselves in their garden, “the root of the farm.” Podoll says, “Gardening has taught me how to farm.”

“The whole of agriculture has evolved from just gardeners selecting seed that they liked,” Podall tells Hamilton. “It’s only within the last hundred years that farmers have been left out. Every farmer or gardener previous to this time did so just as a matter of survival—they needed it to eat. And it’s not long before we’re going to return to doing things that way.”

Hamilton’s detailed description of the changing American landscape and the people who are championing a new way through their love of the land is deeply enduring itself. For more of the book, read the introduction and see a slideshow.