Next Spring Break, Get a Real Tan – A Farmer Tan | Civil Eats

Next Spring Break, Get a Real Tan – A Farmer Tan 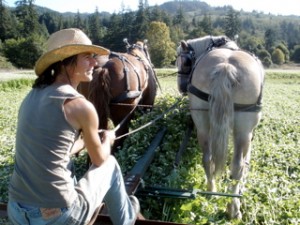 All around the country, classes are back in session this week and a lot of college kids are recovering from week-long hangovers. Fort Lauderdale, Cancún, or Cabo, spring break has earned its rowdy reputation for drunken, beach party debauchery.

The images of bikini-clad beer-bonging are a far cry from the original spring break tradition in America. Back in the day when most people grew up on farms, schools let out this time of the year so that kids could lend a hand with the spring planting. It was a time when farmers made up a sizeable chunk of the population – not the puny 2% of today – and when kids grew up with an inevitable, ingrained knowledge of growing food.

Times have changed. Never before have so many Americans lived in cities (75% of the population). Never before has agricultural production rested on the shoulders of so few (2 million farmers in a country of 300 million). Never before has the food supply seen such monopoly control (four companies control 83% of the beef industry; five companies control half of food retailing; one company provides 40% of all U.S. vegetable seed). And related, never before have kids known so little about agriculture. A recent survey of Los Angeles fifth graders found that they could identify more corporate logos than local plants.

The “so-what” of all this comes when you ask “what happens to our food supply when agribusiness giants like Cargill, Monsanto, and Tyson tumble like AIG?” Or when oil is so expensive that we once again have to rely more on human hands – not just internal combustion – to grow food? What if nobody knows how to tend a tomato from seed to sauce, or has the means of production to do so, like land, water, equipment, and experience?

What do we eat then, other than our shorts?

Between population growth, petroleum shortages and climate change, peak oil expert Richard Heinberg predicts that America will need another 50 million farmers by the middle of this century in order to produce enough food. That’s a lot of farmers, especially when you consider that the average age of American farmers is 57, many of whom are headed for retirement in the next decade. Meanwhile, aspiring and beginning farmers are hobbled by high land prices, poor access to credit, a lack of mainstream cultural support to farm, and limited opportunities to learn the craft.

I’m one of those newbie farmers and, having just barely survived year one, I can tell you this: the system is not new-farmer-friendly. I had to scratch and claw my way into this career of low-paid, dawn-to dusk hard work in order to be able to serve my country food.

That has to change. If we are so keen on investing for the future right now, we ought to funnel some stimulus greenbacks towards the young greenhorns and greenthumbs of America. Could there be anything more “shovel-ready” than a beginning farmer? Can you think of a greener green job? Could there be any investment more important than our own national food security?

My own struggle to start a farm has taught me that in order to succeed, beginning farmers need better access to good, affordable farmland. We need low-interest credit (I have yet to meet a beginning farmer who qualified for any of the USDA’s beginning farmer loan programs, myself included). We need more opportunities to learn hands-on skills through agricultural apprenticeships and gainful farm employment. We need an Agricultural Journeyperson program – similar to the trades – to help facilitate the transition from apprentice to bona fide farmer. And finally, we need the support of our neighbors, parents, guidance counselors, and the whole of American society. We need them to celebrate our decision to farm, instead of brushing us off.

Of course cultural shifts and federal policy change can take awhile, so in the meantime I’ve decided to take some measures to help turn the tide. In the original spirit of spring break, I extend an invitation to all you college students to skip out on Cancún next year and come spend a week on my horse-powered vegetable farm in southwestern Oregon instead. Not only will you go home with a genuine farmer tan, you might just discover for yourself that growing food is more intoxicating than beer, without the hangover.

Zoë Bradbury is a young farmer on the southern Oregon coast, and a Food & Society Policy Fellow. Read more >