The Low Carbon Diet: Getting Beyond the Fad | Civil Eats

The Low Carbon Diet: Getting Beyond the Fad 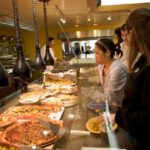 Every year, Americans find a new diet or pill to help them lose weight. Popular examples abound. There’s the low-fat diet, the Atkins Diet, the South Beach Diet, the list continues. Fast food and quick service restaurants rush around to change their menus to offer low-fat dishes, more bread, less bread, 24 oz. burgers loaded with bacon, piles of cheese. And after a few months or years, the “it” diet fades from people’s minds until another one comes long and sweeps the country. These fad diets rarely lead to reducing obesity or making Americans healthier. Rather most lead to the over consumption of factory-farmed meat, cheese and “low-fat” or “low sugar” processed foods filled with high fructose corn syrup, fake sweeteners and partially hydrogenated oils. Well, I think its time we try another kind of diet: the low carbon diet. Except rather than getting you into that teeny, tiny yellow polka dot bikini, this diet helps reduce carbon emissions, fatten the slim wallet of small farmers and cut inches from big agriculture.

The effect of our food choices on carbon emissions has been discussed on this web site before in regards to meat consumption. With Earth Day around the corner, it seems like a good time to think about lowering carbon in our overall diet, especially considering that one-third of greenhouse gasses are emitted by the food industry. Recognizing that nearly 500 million meals are prepared in commercial kitchens each day, sustainable foodservice provider Bon Appétit Management Company is taking an active role in showing diners how to “go low carbon.” Bon Appétit is an on-site restaurant company committed to sourcing sustainable, local foods for all its cafés in universities, corporate offices, and specialty venues. With more than 400 cafés in 29 states, it has developed programs addressing local purchasing, the overuse of antibiotics, sustainable seafood and cage-free eggs. In 2008, Bon Appétit held its first annual Low Carbon Diet Day in conjunction with Earth Day as an opportunity to demonstrate to its café patrons how small changes in their diet can positively effect climate change.

On April 22, chefs at all 400 of its cafés will create low carbon menus focusing on seasonal vegetables, legumes, and whole grains for the second annual Low Carbon Diet Day. Diners will notice the elimination or significant reduction in beef (and overall meat offerings), cheese, tropical fruit and packaged food; there will be appropriate portion sizes (smaller portions means less food goes to waste), local foods, shade grown coffees, as well as less sugar and chocolate at the dessert bar. While these may sound like tough and unrealistic standards to implement company-wide, each cafés’ thoughtfully-crafted menus proves that it is possible to reduce the foodservice industry’s dependency on certain products. Flavor, quality and product have not been compromised to meet these standards. Diners are not missing any nutrients, vitamins or food groups. If anything, people are being introduced to new food concepts.

Here’s a glimpse at some of the items being served on Low Carbon Diet Day from across the country: In Washington D.C. at Gallaudet University, Chef William Risbrook and Chef Lee Powell’s menu includes: mélange of local onion, local leeks, scallions, chives, onions; pan-seared tarragon encrusted rockfish with fresh lemon, grilled garlic spring asparagus, and honey glazed carrots. And instead of the usual offering of grilled cheese sandwiches, beef hot dogs and ground beef burgers, he will be serving a ground chicken burger with fresh Italian basil, scallion and angel hair garlic.

For Bon Appétit, Low Carbon Diet Day is more than a one-time event. The company has set measurable goals to reduce the carbon footprint of the highest impact areas of its foodservice operations by 25 percent over three years (started in 2007 and ending in 2010): reducing beef by 25 percent, reducing cheese by 10 percent, sourcing all meat and poultry from North America and nearly all fruits and vegetables from North America, using seasonal local produce as a first preference and using tropical fruits only as “special occasion” ingredients, reducing food waste by 25 percent, reducing consumption of processed sweets, snacks and chocolate by 10 percent, eliminating air-freighted seafood and reducing the use of water and energy.

In a 10-week pilot program, designed to kick off its commitment to emitting less carbon, Bon Appétit reduced kitchen and consumer waste by 20 percent with a total reduction of 82,000 pounds. Forty percent of its total food waste was redirected to composting (where available), animal feed or fry oil. Additionally, one-third of its cafés donate surplus food to food banks or similar organizations. What does this all mean? Bon Appétit’s emitted 35 percent less (97,000 pounds) CO2 per week just from reducing its food waste. Statistics for its overall carbon reduction are not yet available.

Now, before I ruffle the feathers of meat, cheese and tropical fruit lovers everywhere. I am not proposing that people should stop eating meat, cheese, or enjoying the occasional mango. Trust me, nothing makes me happier than a porchetta sandwich from the Fatted Calf. My suggestion is that rather than spending hundreds of dollars on weight loss and detox supplements or trying to follow complicated diet menus which restrict your fruit consumption but encourage eating steak and cheese, go low carbon. Put down the low-fat, flavorless TV dinner from the frozen food aisle and cook up a pot of beans for the week. Swap out the “low-fat, low sugar” processed dessert meant to curb your craving for sweets and eat a pint of fresh, local strawberries with a dollop of yogurt. And if you are still confused about what you should eat, just stick to Michael Pollan’s advice “Eat Food. Not Much. Mostly Plants.” That’ll get you and the planet into shape for summer.

To compare the carbon impact of your food choices, Bon Appétit has designed the low carbon diet calculator which can help you reduce your carbon emissions by 25 percent.

On Facebook? Take the quiz and test your knowledge.