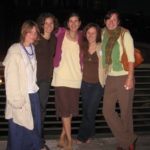 Around the state of Montana, people are taking action to make a sustainable, local food system a reality. From the legislative level to the grassroots level, volunteers and institutions are demanding Montana-produced food. Montana’s food system, like many others, is largely resource and energy dependent. However, the vision for a community-based food system, one where affordable and consistent access to local, nutritious food is available is coming into clearer focus.

Montana Food for Montanans Initiative is just one coalition working to keep more dollars within the state with a mission of creating a resilient and self-reliant food system. Grow Montana is another broad-based coalition that works to support policies that promote community-based food production. Directed by a steering committee with members throughout the state, Grow Montana has revealed, through university research and reports, the inefficiencies of the conventional food system and identified the potential economic benefits of a state-based food system.

In the summer of 2006, Grow Montana partnered with Montana Campus Compact to launch the FoodCorps, a team of five, full-time AmeriCorps VISTAs (pictured) to coordinate Farm to Cafeteria programs across the state. As the Farm to College Coordinator at the University of Montana, I help to procure local food for University Dining Services. By linking local farmers to local markets, we can strengthen the connection regarding where our food comes from and those who produce it while supporting our local economy. Because Montana’s public institutions spend roughly $33 million on food purchases a year, increasing Montana-produced food in public institutions brings significant benefits to the local economy and agricultural community.

But what is the current state of Montana’s food system? Today, 10 percent of Montana-produced food is consumed by Montanans, a figure that had fallen from 70 percent in the 1950s. Thus, most of the $3 billion that Montanans spend on food each year goes to out-of-state companies. A recurrent observation is that Montana is one truck driver strike away from food insecurity. Montana has an incredible amount of food crops, yet most are shipped out of state, processed, and shipped back in. This lack of in-state food processing and value-added agricultural infrastructure is one of the barriers inhibiting the ability of farmers and ranchers to serve in-state markets. Various issues contribute to an institution’s inability to purchase raw product: time constraints, volume of product, lack of space, or labor costs. Thus, it’s easier for schools and universities to purchase produce that has been processed — for example, broccoli florets rather than a head of broccoli, coined carrots rather than whole, chopped lettuce rather than heads. When this infrastructure is lacking, institutions in particular have more difficultly purchasing local food.

Grow Montana seeks to change this energy-dependent food system and revitalize Montana’s economy by working on various levels. The organization has been a significant force in passing key legislative policies that make a local food system possible. In 2007, the Montana Procurement Act was passed which allows public institutions more flexibility to buy Montana-produced food. Previously the law required that public institutions, such as universities and K-12 schools, buy the cheapest food possible. Though not all Montana-produced food is more expensive, the Montana Procurement Act allows public institutions to consider how and where food was produced when making decisions.

On the ground, the five FoodCorps volunteers help put these legislative policies into practice. Purchasing locally-grown food strengthens the agricultural economy and serving healthy and delicious food increases both human and environmental health. As liaisons between farmers, ranchers, community organizations, and food service workers we build relationships and link the various components of our food system. We track statistics regarding the amount of local food purchased and develop educational programs for students and staff. These local purchasing guidelines keep more dollars within Montana and the economic impact is significant.

During the opening session of Terra Madre, the world meeting of food communities held in Turin, Italy this past October, Vandana Shiva expressed that in the midst of an environmental, financial and world food crisis, something must change. She explained that these changes, on the community level, will create the waves of the sustainable food movement. It is this kind of community based change that is helping Montana become more food secure – one institution at a time.

Lianna Bishop, a recent graduate of Marquette University, is an AmeriCorps VISTA with the University of Montana Farm to College Program. Inspired by her Italian roots, she is passionate about improving community access to a sustainable food system, believing fully that what we eat reflects who we are and what we value. Read more >