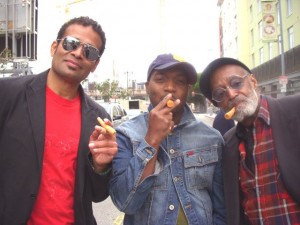 In response to some of the worst economic times since the Great Depression, I’m excited to present my “Grow. Cook. Grub.” series.  With unemployment climbing, diet-related illnesses increasing, and health care costs sky-rocketing, more and more people are looking to feed themselves healthfully, simply, and cheaply.  Using my family and community as an example, I will show readers how easy it is to cook health-promoting, delicious, and inexpensive meals year round using food from my home garden, CSA, and local farmer’s markets.

Film: How to Eat Your Watermelon in White Company (and Enjoy It) (2005), directed by Joe Angio. This documentary chronicles Melvin Van Peeble’s astonishing career.

In March 2008 I went to Los Angeles to film an episode for MVP’s Greenhouse, a television series that follows Mario Van Peebles, his wife, their five children, and his father (Melvin Van Peebles) as they renovate their LA home in an environmentally friendly manner and embrace a more sustainable lifestyle. I was excited to help Mario prepare a meal, but I was overjoyed to be in the presence of Melvin.

I created this salad not so much in honor of Melvin’s cult classic Sweet Sweetback’s Baadasssss Song or the moving biopic—Badasssss—written and directed by Mario, but more so for Melvin’s influence on me as a creative person. In addition to being a screenwriter, director, actor, and film editor, Melvin’s creative pursuits include being a painter, sculptor, children’s book author, dancer, novelist, journalist, translator, composer, recording artist, playwright, playboy, Broadway producer, and stockbroker (the first African American to hold a seat on the American Stock Exchange). And at 77 years old he’s still going strong. Black genius indeed.

*Combine the beets, 3 quarts cold water, and 1 teaspoon salt in a medium pot over high heat. Boil uncovered for 20 to 30 minutes, or until the beets are easily pierced with a knife. Drain. Peel the beets by holding them under cold running water and rubbing their skins off with your fingers or a clean towel.

*Trim the tails off the bottom of the beets. Reserve two of them for the vinaigrette and compost the others. Cut the beets into 1/4-inch dice. In a medium bowl, toss the diced beets with 4 teaspoons of the olive oil. Transfer them to a parchment-lined baking sheet and roast for 15 minutes, stirring every 5 minutes to ensure even cooking. Remove the beets from the oven, transfer them back into the bowl just used, and toss with 2 tablespoons of red wine vinegar. Return to the baking sheet and cook for an additional 5 minutes. Set them aside to cool.

*Place the arugula pieces in a large serving bowl, add the roasted beets on top, and add the candied walnuts on top of that. Immediately before serving, toss well with just enough of the vinaigrette to coat.

Bryant Terry is an Oakland-based eco chef, food justice activist and author of Grub: Ideas for an Urban Organic Kitchen (Tarcher/Penguin) and the forthcoming Vegan Soul Kitchen: Fresh, Healthy, and Creative African American Cuisine (March 2009 Da Capo/Perseus). His work has been featured in Gourmet, Food and Wine, The San Francisco Chronicle, Domino, and many other publications. Read more >