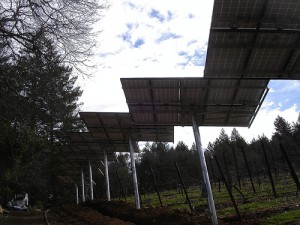 The short flight from Los Angeles to San Francisco is prime viewing time to grasp the enormity of the state’s agricultural land across the Central Valley. But the last time I made the trip the predictable green and brown patchwork of farmland was interspersed with glittering squares: solar panels. I thought to myself, could there really be, in the middle of rural California? As if solar panels had been planted alongside the bounty of alfalfa and almonds, no more or less than any other crop. I grinned from my window seat. But then I started thinking: can solar panels be treated like just another agricultural crop? What is the significance of incorporating them into an agricultural landscape, particularly as one as lucratively productive as California’s Central Valley?

If solar panels were to be claiming precious farmland in the middle of the state, there must have been some exuberant cost-benefits to the landowners. Thinking about the value of agricultural land, and it’s worth in relation to alternative energy production, brought to mind Napa Valley, which may be an interesting microcosm of this broad issue playing out. Land values in Napa are the highest of agricultural land anywhere, upwards of $200,000 an acre for valley-floor parcels. But this same valley floor has also become a de facto leader in alternative energy production, with 40 wineries, out of the 300 some-odd in Napa Valley, owning solar panels as of this season, far more than any other wine-growing region in California. By comparison, in neighboring Sonoma County’s Russian River Valley, only 16 wineries are running on solar energy. 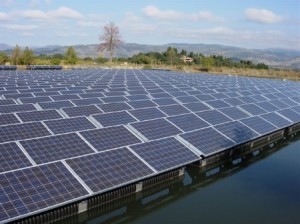 But what is most interesting about so many of these wineries in Napa is that, with the support of aggressive state subsidies, they’ve installed an acre or two of the panels on their properties with an scrupulous eye towards land values. In other words, the bulky solar energy-capturing equipment isn’t occupying precious grape-growing land but has been positioned in innovative ways so as to reap the financial benefits of the panels without supplanting the ultimate money-maker–the grape vines. Frog’s Leap, Far Niente, Long Meadow Ranch, and Grgich Hills are just a few of the wineries that have installed their solar panels on non-grape growing land, consciously integrating them into landscape by placing them on barn roofs, steep or rocky terrain unsuitable for grapes, or leech fields. The latter is where Frog’s Leap installed their half-acre of panels in 2004, on an abutment of partially-contaminated land un-certifiable for organic grape growing, as the rest of Frog’s Leap’s vineyards are. Perhaps the winery able to wow tourists with their solar panels the most though is Far Niente: a portion of their solar panels float on pontoons on an irrigation pond, the winery owners having been unwilling to sacrifice vineyards for the venture.

All of these businesses, and the dozens of other niche-agricultural companies that have elected to install solar panels (such as Cowgirl Creamery in Marin County, and Lundberg Family Farms rice-growers near Sacramento), have done so because it’s good for business. Though the initial capital investment hovers around a million dollars, these businesses are highly energy-intensive, needing large amounts of power for processing and refrigeration year-round. So in these cases, the payback for the cost of the panels is around 5 years and beyond that, the companies can sell their excess power to the local energy grid for profit. The decision to install solar panels for many agricultural-sector companies has thus been less driven by a desire to “do good” for the earth than financial common sense. Were productive agricultural land to be supplanted by solar panels, the financing would probably make a lot less sense.

So should solar, or wind turbines, be treated as another agricultural crop, from a business standpoint? How can these forms of alternative energy be integrated into a landscape that has shifting financial value year to year as well as over longer spans of time? The current water restrictions throughout the state make it too expensive or even impossible to farm some land in the Central Valley, which would make integrating solar panels extremely cost-effective, at least during this drought season. But will our state’s need for large-scale sources of alternative energy compete for the remaining productive land that yields a majority of the country’s almonds, cotton, and stone fruit?

It’s expensive as of now to plop solar panels down in the otherwise unproductive remote deserts in southeastern California and our national energy grid isn’t yet set up to transport large amounts of energy generated by solar panels in one region to another region sorely lacking in sun (though wouldn’t we love for California sun to be exported to the northeast in lieu of January’s strawberries). So until some massive federal money kicks in to upgrade our domestic energy grid, our alternative energy supply will remain highly localized. The verdict is still out on to what extent localized alternative energy production in agricultural areas is the best way to tackle our broader energy conundrum, however. In the meantime, let’s look carefully at the complexity of shifting land values in a state like California that holds the potential for an ever-increasing supply of alternative energy but also remains the country’s specialty crop breadbasket, however parched the breadbasket may currently be.

Photos: above, sunlightelectric; below, Thomas Roche