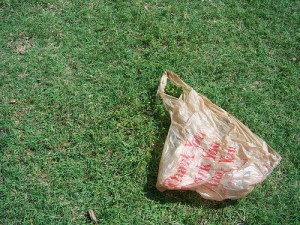 The Berkeley Farmers’ Markets, a program of the Ecology Center, are eliminating all plastic bags and packaging from their three weekly markets, making them the first in the nation to do so. The goal of the markets’ “Zero Waste” campaign is to remove, reduce, and recycle plastic and to recycle and compost all materials generated at the markets.

Single-use high-density polyethylene (HDPE) bags pose significant problems to the environment, wildlife, and human health through their production, use, and disposal. They can take from 400 to 1,000 years to break down, and their constituent chemicals remain in the environment long after that.

Made from crude oil, natural gas and other petrochemical derivatives, an estimated 12 million barrels of oil are needed to make the 100 billion plastic bags Americans use annually—more than 330 per person per year, according to Worldwatch Institute, an environmental watchdog group. Most plastic bags are thrown away, clogging landfills, and, with less than one percent of plastic bags recycled, many enter the water ways eventually killing animals that ingest the plastic debris.

In 2007, San Francisco became the first major U.S. city to ban plastic grocery bags, and officials in Austin, Texas, Seattle, Phoenix, and Portland, Ore., have considered similar policies. Countries including Ireland, South Africa, and China have limited the free distribution of plastic bags, leading to a sharp reduction in the number of bags in circulation.

“Berkeley, a city known for its progressive politics, is once again taking the lead by phasing out plastic bags and packaging at its farmers’ markets,” said Ben Feldman, Program Manager of the Berkeley Farmers’ Markets. “As a community, we come to the markets to support the stewards of the land and to nourish ourselves from the bounty of the earth. Zero Waste is beyond recycling; our goal is to close the loop by reducing our reliance on unsustainable and finite resources.”

The Berkeley Farmers’ Markets are now designated as “Zero Waste Zones” in which customers and vendors are expected to make every effort to eliminate waste to landfills. The markets encourage shoppers to bring their own cloth bags and previously used paper and plastic bags. Vendors selling prepared foods will be required to use compostable packaging and utensils. In addition, with support from a grant from the Alameda County Waste Management Authority, the Ecology Center has purchased compostable bags, made from renewable resources, which will be made available to vendors at half price.

At the recommendation of an advisory committee and staff, the board of directors of the Ecology Center approved a new policy to ask farmers to charge customers 25 cents per bag. The Ecology Center hopes that a fee charge for the renewable bags will allow farmers to recoup theirs costs and encourage customers to bring their own bags. These same renewable bags can be added to the residential food scrap composting program, used as liners for kitchen food scrap containers, and returned to customers as compost during the markets’ free compost events.

“Single use plastic bags are a bane to the environment and I support the Ecology Center’s proactive approach to the plastic problem,” said Judith Redmond, co-owner of Full Belly Farm, a vendor at the Berkeley Farmers’ Markets, and a leader in the sustainable agriculture movement. “We welcome the opportunity for conversation with the community on how to further our commitment to a sustainable future.”

The Berkeley Farmers’ Market Zero Waste Event will take place during Berkeley’s Earth Day Celebration from 10 am to 3 pm on Saturday, April 25, and present several activities, including an all-day eco-carnival game from the Sustainable Living Road Show; a bag making workshop to learn how to make reusable bags; and a raffle to win Zero Waste Kits (including cloth bags, a stainless steel water bottle, and a take out container), Berkeley Farmers’ Market gift certificates, Ecology Center memberships, and more. The raffle tickets will be given to customers for each type of re-usable container/bag they bring to the market that day.