The Garden, A Master Teacher 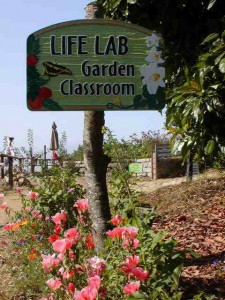 One of the complex questions I have been living is the question of education. This is a question that has grown within me from my own education in the public school system and now ripens as I have the stewardship of nurturing my own four daughters. For their sakes, I have waded through the war-zone of educational philosophies with the cross-fire so thick that I could not clearly see who was wrong or who was right. At last I came upon a place of peace, where Dewey, Montessori, Steiner, Mason, Rousseau and Froebel all seem to call a truce. I have found a place where public schoolers, home-schoolers, and private-schoolers can amicably co-exist. This higher-ground is in the garden. It seems that educational experts through the ages and across the globe have all cited the garden as a master teacher. In the garden we learn first-hand about nurturing and caring, patience and discovery, stewardship and respect, beauty and life. We also learn practical skills such as mathematics, science, health and nutrition. Perhaps even more relevant today is the opportunity that gardening gives us to reconnect with nature. Research and anecdotal evidence tells us that when this connection with our natural world is established and nurtured, the child’s mind becomes centered and focused, eager to attack other areas of academia.

The modern term that describes the methods of experiential education as taught in a garden setting is “Garden-Based Learning” or GBL. Garden-Based Learning is not of course new. In its most primal forms it is older than the means to document it. Throughout the last century plus, the school-garden movement has ebbed and flowed in the United States according to trends in educational reform. During World War I, with many farmers called away, school children were actually relied on to help grow food for the nation. The most recent resurgence seems to have come about as an antidote to the rampant rates of childhood obesity, nutritional deficiency, and what author Richard Louv has poignantly termed “nature-deficit disorder.”

My own introduction to GBL came about through a teacher-friend who invited my daughter to attend a summer program with her daughter at the Life Lab Garden Classroom in Santa Cruz, California. To my delight I discovered that the Garden Classroom is one of those places where you go and find yourself again. The Garden Classroom is set up on a hill where the sultry smells of the earth blend with the salt-mist smells of the ocean. You walk up the footpath and find yourself drawn in by trees and fields and cows and happiness. The children spent the week planting seeds, harvesting vegetables, cooking garden-food, composting scraps, watching worms, holding chickens, studying bees, sighting birds, singing songs and loving life. Watching my daughter alive with learning, I began to feel the inklings of the answer to the question I had been living for so many years.

The next year I sent two of my daughters to the Life Lab Garden Classroom program. My younger daughter, Olivia was only 6 ½ years old. I decided to enroll her because she had shown a peculiar, I thought, difficulty in surviving any formal school setting. As a three year old I withdrew her from preschool after two weeks because her attitude when I picked her up each day was dramatically sullen and filled with anger. In the first grade she insisted on going to public school. After three days of post-school raging and trembling episodes, I brought her home again with disconcerted wondering. That summer I sent her to the Garden Classroom. As I had hoped, she positively blossomed in the Garden Classroom. She came home happy and singing every day. She was able to enjoy peer relationships and learning without undue stress and social anxiety. The natural setting seemed to provide the nurturing she needs to thrive. She was always learning yet never feeling rushed or pressured. This experience has convinced me that the garden truly is a master teacher. GBL advocates all have personal experiences that keep them committed to the cause. John Fisher, Garden Classroom Director at Life Lab Science Program, shares this story.

“Marco was a third grade student who recently moved to California from Guatemala. He came to the garden with a small group of classmates and a special aid. His shy disposition was not unusual for a visitor to the garden but I soon learned that the garden setting was not the reason for his shyness. While asking the children questions about the garden, identifying plants, recognizing scents and insects Marco’s classmates were quick to let me know that Marco has never spoken a word at school. We continued to tour the garden. We sat in the grape vine covered dome and ate our six plant part “burritos,” we looked at the composting worms and opened up flower seed heads. All along Marco seemed to gain interest, doing what all the other kids were doing. Then he found the strawberries. He stood by them and looked at me. I kneeled down to his level and picked one and motioned for him to do the same. He did. I said “fresa,” I said it again encouraging him to repeat me. A small fearful moment of silence passed then Marco said “fresa” followed by a faint smile. His aid was astonished, I looked over Marco’s head and saw her huge smile and tears in her eyes. That was the best strawberry I ever ate.”

Martha Deichler, Principal of Borregas Springs Elementary School and avid school garden advocate, points out that though a garden curriculum has obvious benefits for children with such labels as ESL and ADHD, its fruits are for every child.

It seems that garden-based learning reaches into a very deep part of us, beyond all the things that divide a group and into our very humanity.

It takes commitment from the staff and parents and an openness to see things in a new light but success stories are sprouting up in many school gardens around the country. The great news is that for those wanting to get started the groundwork is already in place. A thriving school-garden program is something that can be done now to make our schools a more nurturing and healthful place for our children.

I say “thriving” because not all schools that claim to have gardening programs are reaping the fruits of what a garden program can be. One friend of mine, who is a retired teacher as well, confided her frustration after volunteering in her first grader’s school garden. She spent hours preparing the plot and gathering supplies and was excited to spend time in the garden with the children. Her disappointment came when she was instructed to lead the children in groups to the garden where they would each plant a bulb and then line up to wash hands and return to the classroom. She was given 20 minutes total with each group, which when you consider the time it takes to line up, walk to and from, and wash hands is desperately insufficient for any real impact.

Throughout so much of their day children are being told what to think. In the garden, as with all experiential learning, children learn HOW to think. Carol Hillhouse, Director of the Children’s Garden at UC Davis and mother speaks from experience when she tells me that “Children are led by the magic of discovery. This discovery-mode is intrinsic to a child’s development.” One of the first things that a garden-educator will do when bringing the children into the garden is to give them time (ahhh the gift of time) to explore. Martha Deichler begins her garden sessions with an invitation to “Look around and see what you see. See what has changed since last week when we were here.” The children sometimes become so enthralled by discovery, says Deichler, that this becomes the entire lesson. There is so much happening in the garden.

This post was excerpted from a longer article written for the Life Lab Science Program, UC Santa Cruz.

Kirsten Berhan lives with her husband, four daughters, and 16 hens in RioDel Mar, California where they own an environmental and safety consulting business. Kirsten takes to heart Charlotte Mason’s suggestion to spend at least two hours daily out of doors with the children. Kirsten writes many checks and lunchbox notes and occasionally she puts her pen to work for something she is impassioned about. Read more >