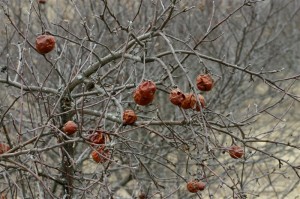 Apples and apple growers are in trouble. At one time, North America had over 14,000 apple varieties populating habitats from coast to coast. But in the 2001 Fruit, Berry and Nut Inventory published by Seed Savers Exchange (Whealy, 2001), the number of apple varieties available to Americans through nursery stocks had dwindled to 1,500. The continued tragedy is that in 2009, only 11 apples comprise 90% of what Americans access and enjoy.

I hadn’t thought closely about apples until this spring when apple experts and advocates from across the United States met in Madison, Wisconsin. Under the leadership of Dr. Gary Nabhan, founder and facilitator of the Renewing America’s Food Traditions (RAFT) alliance, and Jenny Trotter of Slow Food-USA, nearly 20 apple experts assembled for a “Forgotten Fruits Summit” to discuss the alarming decline of apple varieties and identify strategies for maintaining apples in the landscape.

The Summit marked the inaugural summit for RAFT’s Heirloom Apple community. This collection of apple enthusiasts have spent their entire lives grafting, pruning, harvesting, pressing, enjoying and fighting for apples. Their earnest conversations and easy laughter showed how they recognized the importance of enjoying as much as fighting for apple culture. Dialogue freely slipped between debating technical pest management techniques to exchanging culinary tasting notes, underscoring a shared passion and awareness that their work has both ecological and cultural value: to conserve both genetic diversity and food traditions.

Nabhan describes that these apple growers “have all worked so hard in their parts of the country to grow apples and record their names and stories. Each is so intent on rescuing apple history in their neck of the woods, that they never had time to meet each other.” 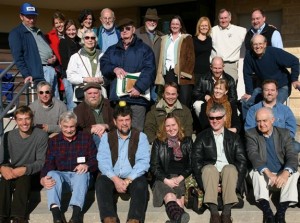 As the experts went around the room and introduced themselves, it soon became clear that they were not just talking about apples. But, equally, their life stories were being told by apples that they have grown, written about and even brought on the plane to share. So much of who these apple growers are is a reflection of the landscape they come from.

Take Tom Burford from Virginia, who is a self-confessed apple grower, corrupter and educator. He begins his story relating how he “was born under an apple tree on a very hot August day in 1935. My mother and grandmother went to harvest some Smokehouse apples to fry for supper. When my mother arrived at the tree, she said ‘I think I’d better go back to the house,’ and ten minutes later I came into the world. And because my life has since been devoted to apples, I later would kid her, ‘Mother, why couldn’t you just let me be born under the apple tree?’ That would have added a more flavorful tale to my life story. But she replied, ‘Son, it would have been comfortable for you, but not comfortable for me.’”

Burford’s early exposure to apples grew into a lifelong vocation that took a unique turn later in life. He had a production nursery for 40 years, but the growing loss of fruit tree diversity made him realize training new growers was crucial to the apple’s survival.

“My work today is about education. I want to help people discover that they can have a passion for apples.”

Apples have a system for storing and transmitting their genetic information, passing on their traits from generation to generation through seeds. Similarly, cultures create systems for passing on knowledge and tools to a new generation to ensure the vitality and health of their communities. Burford is one of these “cultural pollinators,” sharing his knowledge with young growers to ensure trees and traditions have a future.

“A decade ago, I would never have dreamed that we would be together in this room. That we would be a driving force to help nurture the future of the apple in America,” Burford reflects. And their work couldn’t come at a more critical time.

The core task put before the fruit experts at their summit was this: to discuss the country’s declining apple diversity in order to identify strategies for restoration and raise a new generation to the trade.

Nabhan continues with the shared responsibility of this work, stating that “we all have to re-imagine this apple culture we are talking about… the trouble is a lot of the antique apples are now grown by antique people, and we need to be sure a new generation is brought into the fold. It is just as important for the elders to know their excitement and passion for apples is being heard and wanted by the next generation.”

Some of the fruit experts were able to participate in this training, sharing their knowledge with the next generation of fruit growers.

Burford speaks that, “propagation itself is the element that defines society. Today, the people who hold power in our society are in technology. In my time, the agriculturalists held the power. We need to understand this, and we need to see a shift… so that agriculturalists and those who care for our land have [greater] representation again. This is why we need to teach people not just where food comes from, but also to empower them to grow it for themselves. Propagation is power. That is why, for me, doing grafting workshops is so important.”

Slow Food-USA has placed 129 varieties on its “Ark of Taste” to raise awareness and encourage interest in these regional and heritage varieties. For more information on the American apple, click here.

For more information about the work of RAFT and future workshops, visit: http://www.slowfoodusa.org/index.php/programs/details/raft/.

Heidi is a cheese- and butter-making apprentice from southern Wisconsin. Her commitment to good food comes from her love for the land and farming. She has developed training programs for artisan food producers with the Peace Corps, Heifer International, the Land Stewardship Project and the Dairy Business Innovation Center. Read more >