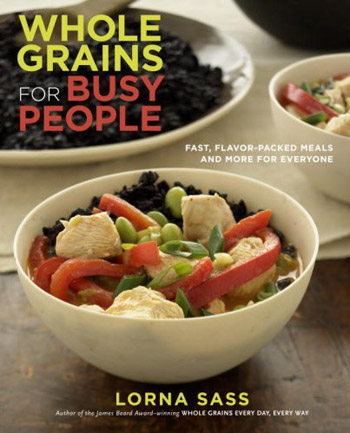 So the First Family’s pulled up a patch of green turf and rolled out the red carpet for that dynamic dietary duo, fruits and veggies. Finally, fresh produce has a friend in the White House (except for beets, which, sad to say, the President declines to eat.)

But where is the Beltway ballyhoo for the third crucial ally in the Axis of Eat Well? It takes three pillars to form the plant-based diet we’re supposed to adopt if we want to save ourselves and the planet: fruits, vegetables, and whole grains. With all the publicity that the Grow Your Own movement has been getting, it’s high time to shine a light on America’s Grainy Day Woman, Lorna Sass, whose last book, Whole Grains Every Day, Every Way won a well-deserved James Beard award.

Sass’s new book, Whole Grains For Busy People, may be an innocently titled paperback with a cheery, wholesome-looking cover, but don’t be fooled; the recipes inside are out to subvert the way Americans eat.

And not a minute too soon, because while “white bread” has become synonymous with “bland,” it’s really not so benign as that; eating all those processed foods high in refined flour contributes to diabetes, obesity, heart disease and cancer.

The thing is, though, we’ve all grown so accustomed to white flour (and white rice) that many of us don’t know how to bake with whole wheat flour and have no clue what to do with whole grains like rye, barley, corn meal, and spelt. We think millet is for the birds, and associate brown rice with seitan worshippers.

Sass comes to the rescue with Whole Grains For Busy People, making it easy for folks to prepare quick, simple meals built around whole grains that you can cook up in half an hour. These grains may be foreign to your pantry, but they’re the staples that have sustained mankind for centuries. And they offer a wide range of tastes and textures infinitely more interesting than their pale, over processed cousins.

As Sass explains, refined flour only became the norm after manufacturers discovered that flour would keep indefinitely if you removed the bran and germ. Unfortunately, this process also removes “50 to 90 percent of the nutrients and phytochemicals” contained in whole grains. Whose shelf life would you rather shorten–your own, or your flour’s? Whole grains are not only high in nutrients, antioxidants and fiber, but because our bodies absorb them more slowly than refined grains, your body is spared the kind of spikes in sugar and insulin that can lead to diabetes and metabolic syndrome.

Whole Grains For Busy People is, like all of Sass’s books, crammed with useful information and tips as well as easy-to-make recipes. For all those folks who’ve tried whole wheat pastas and pastries in the past and found their texture lacking, Sass highlights culinary breakthroughs such as King Arthur’s white whole wheat flour, and provides a chart rating the new whole grain pastas that constitute a dramatic improvement over the “gummy, gritty or mushy” varieties you may have encountered in the past.

Sass is especially enamored of the brown rice pastas that have been a boon to the gluten-intolerant. Adapting a technique from Cook’s Illustrated called “skillet pasta,” she offers a whole series of super quick dishes featuring brown rice pastas that can be cooked in a single skillet along with their sauce, eliminating the need to boil a pot of water and pre-cook the pasta.

Many of the recipes featured in Whole Grains For Busy People are clever whole-grain enhanced variations of familiar dishes. The quinoa-creamed spinach, for example, achieves its cream-free creaminess through the use of quinoa flakes–a product I had spotted at my local health food store but had no clue what to do with till I found Sass’s recipe.

Sass includes a number of vegetarian dishes, and even the meat, poultry and fish-based recipes play down the protein in favor of grains and veggies. Plus, Sass offers plenty of variations that make it easy to adapt her recipes to suit your own dietary preferences, whether you’re vegan, vegetarian, or “flexitarian.”

You may know that “quinoa” is pronounced “KEEN-wah,” not “Kwi-NO-ah,” but do you know what to do with it? Whole Grains For Busy People offers ten different dishes featuring quinoa, from soups and stews to a stir-fry, a paella, and even a pudding.

You know you’re supposed to be eating more whole grains. You hear it from everyone: Michael Pollan, Marion Nestle, Mark Bittman–and, of course, the USDA, which tells us to eat more whole grains even though its agricultural policies continue to encourage over processed, highly refined foods (how passive aggressive can you get?)

Whole Grains For Busy People takes obscure, fringe-y grains like quinoa and farro–along with neglected pre-agribiz staples like barley and buckwheat–and incorporates them into classic comfort foods using simple ingredients that are widely available. It’s a stealthy way to bring these whole grains back from the culinary wilderness where they’ve languished too long. Here’s to the end of white flour power, and a resurgence in fiber–whether it’s moral or dietary. We could use more of both, these days.