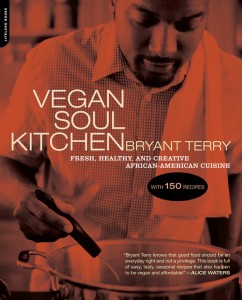 I was so excited when I received Bryant Terry’s newest cookbook, Vegan Soul Kitchen: Fresh, Healthy and Creative African-American Cuisine.  First, because I grew up on southern delights like baked beans, corn bread, grits and coleslaw, but have been hard-pressed to find tasty recipes that don’t call for industrially canned and/or processed ingredients.  Second, the recipes in Terry’s book are vegan — which I see as an added bonus (though I’m not a vegan, I love eating that way), allowing the eater to get back to the core of what makes soul food good: Terry shows us that it’s the fresh, simple ingredients that bring the most flavor.

Vegan Soul Kitchen is first an ode to reclaiming African-American cuisine.  Collards (with orange and raisins, tried successfully over at La Vida Locavore), Gumbo Z, and Black-Eyed Pea Fritters mash up the old thinking on Caribbean, Cajun, African American and even Native American cuisines, reminding us that dishes don’t have to be heavy or greasy to be delicious.

Terry is an eco-chef, meaning that he takes note of his impact on the planet and avoids waste while cooking, reserving vegetable trimmings for stock, collard stems for his “Collard Confetti”, and squash seeds for toasting.  My favorite eco-recipes, though, are his many offerings for the humble watermelon, including salting it, which we always did at my house (his version throws in basil, too), a recipe for a Double Watermelon-Strawberry Slushee, a tantalizing Balsamic Syrup-Sweetened Watermelon Sorbet and also for Citrus and Spice Pickled Watermelon Rind, all of which I can’t wait to try this summer.

When I got my copy a few weeks ago, I was participating in Kim O’Donnel’s Eat Down the Fridge challenge on her blog A Mighty Appetite.  The goal was to eat what you have on hand, clearing out the fridge and pantry.  As I flipped through Vegan Soul Kitchen’s pages, my mouth started to water. Sure, I’d eaten a sort of boring buttered kasha with caramelized onions for lunch, which hadn’t quite filled me up, and was still hungry.  But now I was armed with inspiration — and a cabinet full of beans and grains — and I was ready to improvise.

My eyes alighted on the Johnny Blaze Cakes, as I scanned the ingredients, stone-ground cornmeal, wheat flour, baking powder, sea salt, cayenne, rice milk, jalapeno and olive oil, I realized I had every one aside from the jalapeno. No matter, some extra cayenne would do.  The recipe that I felt would compliment the cakes was the Baked BBQ Black-Eyed Peas, for which I substituted black beans (it was what I had on hand).  The result was a bold play on traditional baked beans and corn bread, which I’ve since made again with equal success.

Terry’s enthusiasm for inspiring people to eat better with easy-to-make, delicious recipes is present throughout his cookbook.  He empowers cooks by tying cooking to culture — a powerful tool for change. His recipes are more like oeuvres.  Like those from his previous book, Grub: Ideas for an Urban Organic Kitchen (written with Anna Lappe), each recipe here has an accompanying song, even a piece of art is conjured, and sometimes a story from Terry’s own life is there in the mix, too.  The effect is to show that food is more than just gas for our tank, it is instead an engaging process, an art form, something that binds us and brings us together, meanwhile giving us traditions to share.

I cant wait to try the Whole-Grain Mustard and Cornmeal Crusted Seitan next, as well as the Fried Green Tomatoes with Creamy Celeriac Sauce and the Succotash Soup with Garlicky Cornbread Croutons.  Get yourself a copy, tie on your apron, and get cookin’!