Notes from a Student Farmer 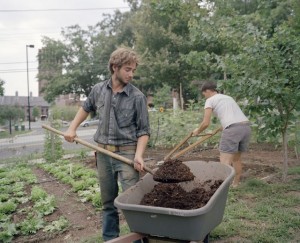 There’s a saying in Arabic: “That is not my apricot; my apricot is some other apricot.” It became a favorite of mine and five other interns two summers ago as we worked on the Yale Farm. When we were confronted with a challenge, the saying made the situation clear. It’s not that I don’t have an apricot—I do—it’s just that that’s not it.

The perennial bed was our apricot.

The Yale Farm is located on a one-acre plot about a twenty minute walk from the center of the Yale campus, up a steep hill that houses most of the science buildings. It’s composed of flat beds and terraces for annual plantings, separated by steep drops. These areas, which we called berms, are not suited to intensive annual cultivation. They can, however, be used for perennial plantings — fruit trees, herbs, flowers; plants that survive from year to year and by all rights shouldn’t need much work or attention. The largest of these areas, on the farm as well as in my mind, is aptly termed the perennial bed — our apricot. It is there that I want to be buried. When I die, I want it to know that it won.

I first heard of the perennial bed when Josh Viertel, then Co-Director of the Yale Sustainable Food Project and now President of Slow Food USA, gave us interns our first tour of the Farm. The six of us were preparing to spend the entire summer on an acre of green in grey New Haven, but it had recently been laid to waste by the installation of new, frost-free water pipes. The usual early spring desolation looked more akin to a construction site than to the verdant paradise we had been promised. Josh casually gestured with the left side of his body to the area above the stone wall and said, “This is the perennial bed. We plant… perennials… in here.”

Our job in the perennial bed was not all that different from our responsibilities elsewhere on the Farm, nor was it all that much harder. We planted things, we weeded, we mulched. It was a simple war of attrition to establish the plants we wanted over the ones we didn’t. Those we would kill, and then we would choke their children with a thick bed of leaves. Though it’s a straightforward task, the perennial bed had a way of swallowing work. We could spend a full eight hours hunched over a patch of galansoga only to look up and see an area identical to the one we had entered eight hours before.

The weeds grew in big stands that looked just like normal plantings. There’s a unique feeling of terror you get with your hand wrapped around the stem of a plant, trying to decide whether or not to pull it. “It’s so big and healthy,” you might think, “surely, this, this is supposed to be here.” I remember a fellow intern waving out from amidst the thicket, calling another to investigate, and then another, and then me. The four of us gathered, peering and poking at what turned out to be sorrel. Josh wandered over, yanked it out, gave us a little smile, and sauntered off. The next day, a plant of equal ferocity had taken its place, the mulch having been magically moved by some mischievous sprite during the night.

The defining characteristics of a perennial planting are also its most painful. Perennial berms follow natural curves rather than the straight lines that make annual plantings easy to manage. Left without that visual cue, our task became distinguishing various green tufts from various green patches, most of which appeared native to some undiscovered continent. The uneven terrain made mulch slip off at the slightest provocation, exposing more bare soil to house more weeds. A farmer once told us how we would know we were winning: “You feel that sickening feeling in your stomach? That’s how you know you’re doing it right.”

This is not to denigrate the perennial bed—it’s a lovely spot. I hear that blood, sweat, and tears make fine fertilizer. Early in the summer, the sage on either side of the stairs flowered, and the small purple blossoms cupped tiny shots of sugar. Josh suggested that we use them as a garnish for root beer floats, but that seemed somehow untoward. We also had big drifts of oregano, chives, and mint. We harvested them and mixed them with ricotta every day for lunch. There were a lot of stinging nettles, as well.

I talked to an intern from the previous summer who asked about the Farm’s drainage system. He explained how he and the rest had dug ditches throughout the farm, installed pipes and rocks, and then covered them back up with earth. It must have taken them weeks. Now, all that you can see of their project is a lighter strip of less healthy grass that cuts across the center of the Farm. Soon the grass will grow thick over that spot too. Their pipe runs underneath the earth, quietly doing its job. I didn’t give a second thought to drainage all summer. Not my apricot.

On the last week of the summer, we put a whole new batch of transplants into the ground. By that time, the maintenance and mulching had decreased the weed pressure, and noticeable patterns had begun to emerge from the small hill. With luck, the plants we put in this year will survive through winter and come to dominate the space next summer. Perhaps next year, the interns won’t have to put so much of themselves into it, because what we put in will still be there. The lily I fell on will still be stunted, a reminder of the rage we poured into that earth. But that small sign will fade with time, and as the next summer’s workers struggle to build a bench, or a chicken coop, or to finally kill the goddamned hornets, or whatever apricot they will find themselves with, they will have beneath them the pieces of myself and hundreds of others still left in the soil.

This essay originally appeared in the October 2007 issue of The New Journal.

Dave Thier is a student farmer and writer at Yale University. He blogs for the Yale Sustainable Food Project. Read more >