Where our Food Comes From: An Interview with Gary Nabhan | Civil Eats

Where our Food Comes From: An Interview with Gary Nabhan 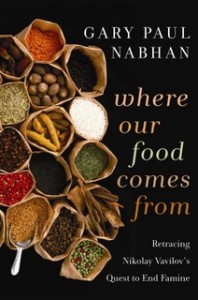 Few people have been working as tirelessly to preserve the diversity of American foods than Gary Nabhan. Nabhan is a man who likes to shun labels and boundaries. He’s a professor of Geography, a conservationist, a poet, a rancher, a prolific author, and the founder of two groundbreaking food advocacy groups: Native Seeds/SEARCH focusing on preserving indigenous southwestern seeds, and later the RAFT alliance of food, farming, environmental and culinary advocates.

The author of numerous books, his most recent title is Where Our Food Comes From, describing a round the world journey that Nabhan took retracing the steps of food pioneer Nikolay Vavilov.

When I caught up with Nabhan for this interview, we discussed some of the impacts of modern farming, the implications of biological complexity, and the direction of the sustainable food movement.

French: In an article a while ago I quoted a friend of mine who said “Agriculture has become one of the most destructive activities in the world,” and I received a lot of angry response from farmers.

Nabhan: But look at the floods in recent years – we caused this. We removed the bottomland forests and we simplified ecosystems. As I literally flew from Madison to Denver, and I just saw water moving soil to the Mississippi mouth and into the Gulf and we now have an anoxic zone in the Gulf of Mexico killing fisheries for miles.

French: I’ve been looking for a farmer to stand up and say “This is a preventable disaster,” after the last floods, but I didn’t hear anyone say, “We can prevent this? We can keep our farms and soil intact.”

Nabhan: When RAFT came out with advice and went to the Plains states, I said “Look, when we had Bison on perennial prairies of legumes, grasses, and sunflowers, we also had micro Buffalo wallows that kept the water and nutrients in place, and created an array of water and habitat to support Prairie Chickens and game birds. And if we move back to a perennial wild-lands based food system and use bison to restore the prairies we wouldn’t have this flooding.

French: And did people hear you?

Nabhan: No, they responded “What are you talking about? I have my bison in a feedlot. People will expect free range bison, and we don’t have the land for that!”

French: So, now we’re in the situation where the direction we are going in isn’t working, but we’re exporting it worldwide as fast as we can while we’re retreating from it slowly ourselves…isn’t that a crazy conundrum?

Nabhan: It’s always tough when you tell other people “Oh, don’t go down that path.” And they look at your lifestyle and say “You’re telling us to be more sustainable??” There are incredible ironies there. We will never pump from the ground as much fossil fuel and ground water again as we have in the last century. It’s just never going to be that subsidized for cheap natural resources.

And so we are going to have to return to the biological wisdom embedded in the natural food diversity and local knowledge. And fortunately, other countries are still closer to those wellsprings of food security than we are.

French: But it’s changing so quickly, isn’t it? You probably heard about the decline of the Mediterranean Diet. As fast and convenience foods enter the small Mediterranean towns, people are getting heart disease and diabetes for the first time.

Nabhan: Yes, and not just there, but all over the world.

French: So, in this modern environment what guides us in the right direction?

Nabhan: Well, I live in the Arizona desert and make sun tea and drink it all the time. When I was on the road I used to get Arizona Iced Tea, without realizing that the number one ingredient was fructose, and that drinking all that fructose was changing my satiation patterns. And so my point is that things that formally worked in our bodies to keep that compass aligned are now getting mixed signals or being completely deceived by the chemicals embedded in our foods.

French: Just like the California condors are killing their chicks by feeding them bottle caps and other metal objects.

Nabhan: Right, good food is not hardwired. My Why Some Like It Hot book is on that topic of complexity. Being trained as a scientist we know there are gene-environment interactions. It’s not solely biological determinism, it’s also environmental feedback loops – that triumvirate of “cultural, environmental, and genetic” – gets you into some complex areas where the signals are easily fooled and confounded.

French: With the biotechnology industry trying to produce food that is “better,” on the website of Monsanto they cite a farmer-scientist saying, roughly, I’m comfortable knowing that farmers are good stewards of what they are doing. We should trust the farmers, therefore the food is good.

Nabhan: You know, I see so many parallels between what’s happening in our economy overall and what’s happening in our food systems, there are parallel philosophies. We’ve over-valued certain things, we’ve forgotten certain things. Just like the money between banks in this way that everyone is counting it as collateral and we have home prices ascending but everyone knew it was a paper empire that was going to collapse. This is the same as planting 20 million acres of a GMO corn in the first year that this corn is released. Inevitably, there are going to be problems with that. That we are going to break down the reciprocity with a particular pest control, whether it’s inserted into the genome of the corn or hand applied by an organic gardener corn silk, we are going to lose the effectiveness of any pest control strategy if we put it out on 20 million acres at the same time. So, the probability that we are going to see a collapse of industrial agriculture parallel with the related collapse of our financial system is just not prophecy, its inevitability.

French: Are we going in the right direction, for a sustainable food movement?

Nabhan: My hesitation is what Wendell Berry says “be skeptical of all movements. So don’t Missionize anything.” Because we already know what part of the problem that Missionizing creates, when you say “Think like me.” That’s a major problem.

There are really only two kinds of cultures in the world: the ones that try to convert others to their values and the ones that are susceptible to being converted – in part because they resist converting anyone to themselves.

French: There’s a new study, by the National Wildlife Federation, about the decline of teaching ecology and environmental topics in the United States. There are fewer courses taught, and fewer courses required, in America’s college campuses. Meanwhile, there is an increase of environmental awareness overall.

Nabhan: Why aren’t we teaching every kid natural history, rather than thinking that we can have good environmental scientists that don’t even know the birds and butterflies and plants that are in their ecosystem models? I mean, I really don’t understand the logic!

French: Because more than ever, as green and eco and buzzwords are flying around…

Nabhan: Well, I don’t think that sustainability has any meaning anymore, it’s been distorted so much.

French: Even the USDA says that “some terms defy definition. Sustainable agriculture is one of them.”

Nabhan: Unbelievable. Well, the USDA can’t talk to people about values. And sustainable is a values based idea.