NRA Reaches out to “Foodie” Community with Gag Gadget 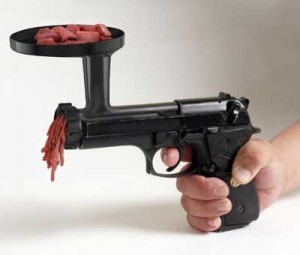 The National Rifle Association today announced a surprising new membership proposal to reach out to food lovers who might become gun lovers with a little convincing. NRA spokesman Bart Barnaby stated “food lovers and gun lovers have a ton of things in common, maybe for the food lover it’s seeking out that crazy fish you kind of know you’re not supposed to eat, while for the gun lover it’s killing that animal that might be considered kind of borderline endangered.”

The NRA developed a functional-and-funny gag “gun” that grinds meat and looks really great stuffed into the pocket of an apron. The “guns” are not for sale, but are a giveaway for any new NRA members (an annual membership costs $35) who can demonstrate that they are professionals in the culinary field. Reportedly, a deal with celebrity chef Chris Cosentino is in the works, a natural partner according to Mr. Barnaby, who said “Think about chefs with all their knives – I’m just struck by the parallels between gun rack displays and those neat roll-up knife carryalls. There are so many identical things among the foodies and the gun lovers that this partnership is a no-brainer.” For more information, visit the NRA website.