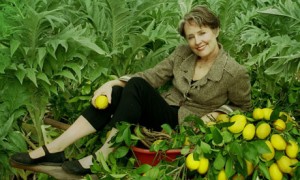 Alice Waters’ office today confirmed reports that the doyenne of sustainable food has partnered with Dean and Deluca on a new line of frozen foods that, in a statement released to the press today, her office described as “a crossover product making sustainability accessible to a wider audience”. The “Simple Perfection” entrees, which consist of a oven-ready terra-cotta plate rubbed with garlic and sprinkled with salt are designed to be laden with seasonal vegetables by the user.