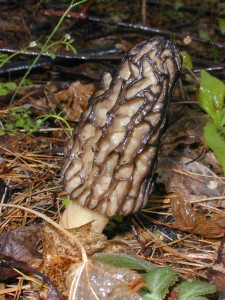 It is with much anticipation that wild morel season is approaching for much of North America. The Upper Midwest and Northeast boast some of the largest yields of these highly prized wild mushrooms. Even larger numbers are collected from the mountainous areas of the West. In fact, in the western mountains, you will find the commercial collectors out in force this spring, following the paths of last season’s fires which will spawn a huge crop of a particular type of morel that fruits after burns.

The public’s interest in foraging for wild edibles in general, and wild mushrooms in particular, is on the rapid increase in North America. (Whether it has anything to do with the fact that none of us can afford to buy groceries anymore, is left to the reader to ponder!) Morel season is a great time for novices to get started as the risks are relatively low; morels are a pretty safe bet with a brief familiarization.

Each year I take part in, as well as lead, many organized mushroom forays around the country and sometimes abroad. In addition, my entire family goes out collecting wild mushrooms throughout the year; the first wild mushroom picked by all three of my kids was a morel. And I guess that’s pretty much how I got started as well. Some of my earliest memories are of being in the woods with my family, hunting morels in the springtime in southern Ohio.

So this spring, maybe you too will give mushroom foraging a try! To get you started, I would strongly urge finding someone with experience. This shouldn’t be hard to do—as far as wild mushrooms go, morel season draws more folks into the woods than any other kind of mushroom. In fact, there are many organized morel forays all across North America and it’s very likely you can find one in your area. In his book Morels, Michael Kuo describes some of the most popular morel events (yep, there are even morel festivals!) across the Midwest. Tom Naumann of Magnolia, Illinois, is a well-known morel guide and, along with several other experts, operates “Morel University” which aims to make expert hunters out of all who take their short (but oh so tasty) course in the spring.

So, where to look? (Again, I cannot overemphasize the benefits of going with a veteran—both to your success and to your health. While small, there is a real chance of finding and consuming poisonous mushrooms. Never take a chance on eating a mushroom that you’re not absolutely certain of: when in doubt, throw it out!) Throughout much of the range east of the Rockies, you’ll have your best luck checking beneath American elm trees (especially recently dead ones), white ash trees, tulip trees, and in very old apple orchards. This last one has been known to morellers for generations. But recently some mushroom hunters have claimed that long term spraying of the apple trees with heavy metal-based fungicides in the last century may cause ill effects in those consuming apple orchard morels. A report in the winter issue of the journal Fungi goes a long way to dispel this myth. Turns out that the heavy metals used to prevent fungal disease in the apple orchards (primarily lead arsenate), while no doubt bad for the environment (and no longer used), is in a chemical form that’s not likely taken up into the mushroom’s tissues. Of course, more research needs to be done but for the time being there is no reason to suspect apple orchard morels are any less safe than those found growing anywhere else. And if you are wary, simply stick to the woods; there are usually plenty of morels to go around!