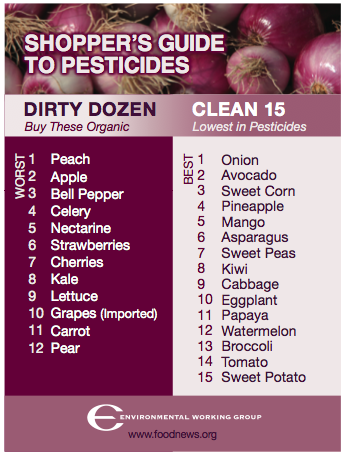 The idea behind the Environmental Working Group (EWG)’s Dirty Dozen list is a simple one. Many of the growing number of eaters who have been swayed by the benefits of organic food still can’t afford it 100 percent of the time. So, by compiling EPA and USDA data on the amount of pesticides left on foods when they are ready to be eaten (once they have been washed and peeled), EWG created a list ranking nearly 50 conventionally grown fruits and vegetables. The 12 at the top earn the “Dirty Dozen” moniker and the 15 with the least reported pesticide residue get listed as the “Clean 15.”

If you are one of the million plus people who have received a copy of the pocket-sized guide, now in its fifth edition, you know it can act as a kind of decoder ring to help unscramble some of the competing messages about where to put your perhaps dwindling organic dollars.

“People have expressed a lot of gratitude for the guide,” wrote Jovana Ruzicic, a spokesperson for EWG, in a recent email. “They seem to feel relieved at the findings. Knowing that they can make a priority list helps overcome the stress of keeping a family or themselves healthy.”

If you’re shopping with more than your own immediate pesticide exposure in mind, however, lists like the Dirty Dozen are only one piece of the puzzle. Why? Because while the guide tells eaters how much is on the food when it’s ready to eat (this part is crucial) it doesn’t say anything about the amount used in the production of that food.

Then there’s this telling rule of thumb: by and large, the fruits and vegetables that are the most loaded with pesticides have thin skins (peaches top the list, alongside peppers, strawberries, apples, and cherries), while a number of the “cleanest” foods have a thick skin or husk, like avocado or corn — in other words, they’re the most protected.

When asked whether shoppers who use the list might have an impact on agriculture’s bigger picture, EWG’s Ruzicic was straight to the point: “We do not have any data that would support (or not support) the thesis that buying from the clean list would reduce pesticide use.”

Selyne DeYarus of the Organic Center, a research-based nonprofit with a guide of their own called Organic Essentials, acknowledges that what’s missing from the list might be equally important as what’s included.

“There are a lot of implications for the use of these chemicals that may not be direct.” she says. “You’re not as likely to be contaminated by eating an orange as you are a peach, for example, but there may be quite a lot of residue on the peel.” DeYarus also points to what she calls a “trickle down effect.”

“Those toxins still kill mammals and birds when they get in the groundwater and surface water.” And when it comes to toxicity, the health of the environment does have an eventual, if not easily traceable, impact on human health. Then there’s also the health of the people growing the food to consider.

Brian Hill, science director at Pesticide Action Network North America, says that any time a consumer chooses an organic product as an alternative to what’s on the Dirty Dozen conventional list, they are making a choice that positively impacts farm workers and their communities. But he has some reservations about the other end of the list.

Onions, which are listed as the cleanest food on EWG’s list, are an interesting example. According to Hill, three of the top four pesticides commonly used on onions in California are fumigants — gases that are put in the soil before the onions are planted. Fumigants, he adds, drift into the air and “affect the workers and the communities near the fields, but they’re long gone by the time the [onions] reach the grocery stores.” In this state, conventional farms use 700,000 pounds of fumigant pesticides on onions every year.

While the Shoppers Guide to Pesticides might not paint the complete picture, Hill says, there are not many other options for shoppers looking to make quick strategic choices about what to buy organic. For now lists like the Dirty Dozen and Organic Essentials do help keep shoppers from feeling powerless against a tide of difficult choices.

He adds, “there are other ways to become generally aware of how pesticides impact farming, by belonging to one of the organizations working on pesticide problems, for instance.”

The Organic Center’s DeYarus is also hopeful that, like most efforts to make an issue accessible, lists like her organization’s can inspire more first-time organic shoppers.

“One can only hope that by spending your money on any organic food item, you are creating more demand,” she says, “which can impact the overall number of acreage that’s farmed organically.”

This article originally appeared in the Center for Urban Education about Sustainable Agriculture (CUESA) e-letter.