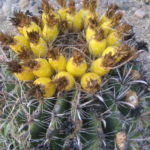 I’ve always possessed a secret desire to be placed in a situation where I would have to rely merely upon my wits, resourcefulness and surroundings to survive. So sometimes I pretend that Armageddon has come along, just to prepare for the unexpected. It’s not uncommon for friends to tell me I would be one of their top picks if faced with the infamous “who would you want if you were trapped on a deserted island” question, primarily due to my foraging skills. Although flattered, I have to admit that it’s really not as hard as one might imagine to fend or oneself in an urban landscape, even a desert urban landscape!

One of the Valley’s celebrated locavore chefs, Payton Curry of Digestif  left Quince in San Francisco a few years ago for Arizona. His boss in California told him he’d be committing “career suicide because nothing grows in the desert.” Curry has since found this statement to be severely unfounded. It’s almost as if Californians, to uphold their breadbasket image, have this urban legend going around that everything immediately east of the Golden State is devoid of life. This mindset not only persists in California but Arizona as well. Time and again I find myself explaining to native Arizonans that food can actually come from plants growing in their home state. Granted, for a few months out of the year all we really get is okra, chilis and tepary beans. However, Arizona is unique in that it actually has two growing seasons and lots of sun… all you need is water! The issue of water is an entirely separate debate, which will not be discussed in this article. I will say that there are people and programs growing and promoting sustainable food production in Arizona such as The Urban Farm and The Phoenix Permaculture Guild.

The Sonoran Desert of Arizona may not adhere to my deserted island fantasies of spearing giant fish and hitting down coconuts but it has its own way of providing. That is, if you know where to look! Below are just a few of the urban desert treasures, both indigenous and otherwise, that can be found on public grounds and in your own (or in your neighbor’s) backyard.

Edible Cacti
Something you’ll quickly learn when harvesting desert goods is that, in order to survive, almost all plants have thorns: Do not be deterred! Cacti have a multitude of uses and also possess nutritional and healing properties. The most well-know edible cacti, the prickly pear cactus, is a double bonus because you not only eat the fruit but the pads of the cactus as well. The pads can be grilled, steamed, sautéed or any other method you’d do with a vegetable like bell peppers. The fruit can be juiced (my favorite is for margaritas, candied, pickled or eaten raw.)

There are plenty of websites with detailed instructions on how to go about it. Four good tips for any cactus fruit are: 1. wear gloves, 2. use tongs when picking, 3. get the spines off using heat, rubbing, picking etc., and, 4. process, which varies among types of fruit. Prickly pear cacti can be found in abundance in a variety of locations including alongside highways, public grounds and vacant lots during the fall harvest season.

Two other less well-known edible cacti include the cholla cactus, which is in the same family as prickly pear, and the fruit of the barrel cactus. The buds of the cholla, harvested in late winter/early spring, can be eaten as a vegetable and are well known for their high calcium content – two tablespoons have more calcium than a glass of milk! The barrel cactus looks like its name and, in springtime, miniature pineapple-looking fruit appears on top. Crazy, but true. The fruit have dark black seeds that can be eaten as you’d eat any seed and is very tart and great for making candy. Both the barrel and cholla variety can be found while hiking and in many neighborhoods.

Mesquite
I find mesquite to be Arizona’s most underappreciated indigenous ingredient. The tan pods, which run rampant around the valley and typically go unused, can be ground into a gluten-free flour, have a low glycemic index and are high in fiber and antioxidants. A special mill is needed to grind mesquite into flour and once a year, during the fall harvest, the Downtown Phoenix Farmers’ Market has a mill available to the public. I have heard that the pods can also be ground in a coffee grinder, but have yet to try it. The flour has a lovely sweet-smokey taste and can be used in numerous ways, such as in baked goods, sprinkled in oatmeal or rubbed on meats for flavor.

Dates
I have been fortunate in that I have access to plenty of dates through the Campus Harvest Program at ASU. Most dates grow too high for typical foraging access but keep your eye out for the low hanging gems on certain palm trees. Dates can be eaten just as they are or made into items such as date jam, my personal favorite!

Citrus
Although not indigenous to Arizona, citrus is one of “The Four C’s” of Arizona because so many citrus trees have been planted in the state. Citrus is extremely easy to come by, as most people have more than they can handle, so don’t hesitate to ask your neighbor!

A common phrase here is “Love Phoenix or Leave Phoenix” and although I will be leaving before the summer hits for other opportunities on pastures a little less “water challenged,” I will always hold a special place in my heart for Arizona and the harvest that abounds.

Kristen Rasmussen is a graduate student of nutrition, food activist and urban forager currently working as the nutritionist for ASU Dining Services. Originally from the Northern California coastline, she now enjoys exploring Arizona’s local food scene and making marmalade. Kristen is not sure where she will be experimenting with locally harvested goods in the fall, but is looking forward to the challenge. Read more >