Eating in the Air | Civil Eats

Eating in the Air 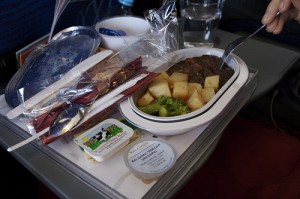 ‘Progress is the injustice each generation commits with regard to its predecessors.’

Since food has been so thoroughly swept up in current financial ablutions, I found myself grateful and a little impressed when the flight crew on a recent flight to Italy began preparing their carts for dinner. I have a great sentimental attachment to airplane food: my grandfather found it inexpressibly exotic, and in my distaste for it I appreciate how much broader is my frame of reference. Also, since a looting of all pleasure so often stands in for sensible economy, I’m a booster for food and drink in any form.

Just the fact of being handed a tray of something edible suggested an alliance between the airline and me. I started feeling charitable. Even though the meal offered, either a rubbery ham omelet or a chicken breast, only marginally resembled food, it wasn’t worse than what I’ve seen served in hospital rooms or school cafeterias—nor was it any better. And it can sometimes be hard to recognize when locally-produced food is being used, as is the case with caterers who get ingredients from Sysco, which claims to prioritize buying regionally: just because food has been overcooked, under-seasoned, and vacuum-packed to within gasps of life doesn’t mean, by definition, that it came from far away: bad cooking can ruin otherwise good food.

While I mulled and moved things around my tray, it was the condiments, with their sophisticated packaging and blithe self-assuredness—I got the sense these things would survive to be spread and splash over the in-flight meals of my children and my children’s children—that subdued my goodwill.

Meals were accompanied by two single-serving packets: one of Land O’Lakes Fresh Buttery Taste Spread, and one of Heinz Thousand Island salad dressing. Each of the two was adorned with cover art, the first of the Indian lake maiden, majestically bearing her butter-stick offering, and the second with a montage of squeaky-looking vegetables, glistening with something that beaded up like contempt.

What I wondered, flexing and squeezing the little packets of viscous suspensions, was whether our technology had finally, irreversibly slingshot us out of reach of our stomach’s best attempts to keep us human. Someone who senses a little rupture in our common cause every time nourishment is thought of as fat to be trimmed, I suddenly feared that while I had thought my objections were to food additives, they were actually to progress. What the heck else were they going to give us miles high in the air to put on our food?

These intricate concoctions were, apparently, necessary if I was going to insist on eating a meal, as I do, on a plane. I kept the packets from the plane and placed them on the kitchen table of my boyfriend’s sister in Milan, where she looked at me like I was crazy, and tried to imagine the solution I would recommend to a harried, fast-food-addicted, erstwhile-luxury-transportation industry trying to do right by me. I researched the prices of the condiments ($0.04 and $0.11, respectively), and then looked at organic alternatives, which were more expensive and still left me unsatisfied. I took measure of the similarity between my discomfort with the dressing packets and my discomfort with other food simulacra that have been devised to match our lifestyle for better and worse—like organic, whole-wheat wraps and hormone-free frozen yogurt.

After a few days I threw out my airline condiment packets and forgot about them. Then, with an hour to wait in the Milan airport before boarding my return flight, I bought a salad to bring on the plane. Once on board I opened up the plastic container, steeling myself for whatever food imitations I’d find. And then, there they were: the two single-serving condiment packets that renewed my appetite and good zealotry.

One, of the same size and shape as the Thousand Island dressing I’d been served leaving the U.S., read simply “Olio di Oliva extra vergine,” (olive oil) and the other, which was a little blue triangle read “sale” (salt).

Once back home I did price searches for the oil, which was very good, though not for the salt. I couldn’t find the pretty aluminum tube for under $0.35, putting it at twice the cost of the butter spread/dressing combination at which I’d turned up my nose. I wished it had been the same price, or cheaper, but I am still grateful: there is a way to go on with our lives and go on eating well; the key just might reside in good packaging, which seems very modern indeed.