Who Are We Talking To? A Personal Reflection on the Business of Slow Food | Civil Eats

Who Are We Talking To? A Personal Reflection on the Business of Slow Food 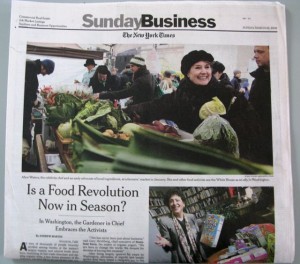 I was amazed when I opened my New York Times yesterday, after a busy Sunday working at the café. The first face I saw when I pull the paper out of its blue plastic wrapper was that of Alice Waters, gracing the cover of the Sunday Business section. The superb accompanying article by Andrew Martin raises the question of whether the sustainable food movement is ready for the visibility it is getting these days.

According to the article, Michael Pollan doesn’t think so:

Mr. Pollan, who contributes to The New York Times Magazine, likens sustainable-food activists to the environmental movement in the 1970s. Though encouraged by the Obama administration’s positions, he worries that food activists may lack political savvy.

“The movement is not ready for prime time,” he says. “It’s not like we have an infrastructure with legislation ready to go.”

While I entirely agree with him, I think this is perhaps the wrong question. My question is: does a grass-roots movement that is focused on re-localization and de-centralization of our food system need a centralized infrastructure in the first place?

Consider this: currently over 85% of large food manufacturing companies have a sustainability program in place. While it is certainly true that they are primarily focusing on “Sustainability 1.0” programs of waste and energy reduction, the fact is that Big Food is starting to take notice. And the reason they are taking notice is because people are increasingly choosing the most sustainable and green products that they think they can afford.

As is the recent 60 Minutes profile of Alice Waters that was discussed in the article. Her segment was followed by a deluge of discussion online and on the airwaves about the role she has played in creating this movement.

Lesley Stahl began the piece with a loaded statement, saying “When it comes to food, Alice Waters is a legend. At age 64, she has done more to change how we Americans eat, cook and think about food than anyone since Julia Child.” Provocative stuff, for a foodie.

Personally, I believe that Ms. Stahl is right. I was born in the same month that Chez Panisse opened, in August of 1971.  Nearly four decades later, I now run a café less than two miles from that honored institution. In that time I have seen first-hand how fresh local hand-crafted food has gone from being a fringe-of-the-fringe movement to where we are now.

As a infant and small child, I lived on a farm commune in the California foothills.  Later, my Mom bought a small farm on the outskirts of Sacramento, where we raised rabbits and chickens for food, and had a mixed vegetable and fruit garden year round.  Growing up, eating locally wasn’t a way of life or a political statement, it simply meant harvesting the days eggs and vegetables, maybe skinning a rabbit to roast, and perhaps pulling some apples or winter squash stored in the shed.

Being a farmer was definitely not culturally accepted where I lived.  As a child I didn’t appreciate it much – especially when asked to explain the roasted rabbit leg in my lunch bag during elementary school.  A rabbit leg was definitely a 4th grade conversation stopper.  And my sister and I would get heckled, even pelted with stones, by passers-by when we would forget to change out of our knee-high mud boots before going to the local store.

We sold our eggs door to door around the neighborhood, to the Sacramento Natural Foods Coop, and later to a new crop of gourmet markets that were opening up in the early 1980’s. I remember clearly one spring when one of these markets asked if we could harvest our vegetables smaller. Smaller, we asked? Yes, they said, the new trend was for baby vegetables. We happily obliged. It wasn’t until much later that I learned this trend was in no small part the result of Alice Waters’ personal taste for Chez Panisse.

The impact of Waters’ choices has been discussed and dissected at great length in various articles and books. But I personally think that it is simply that she has kept her vision true and steady for so many years that her impact is so great. Restaurants come and go in America, even the great ones. A great 40-year old restaurant is a rare thing, indeed. And to have a venerated restaurant that forged long-standing relationships with farmers, ranchers and foragers directly has done more than a little to raise the respect they receive. Little by little. Year by year.

After university I specialized in tropical biology and worked and lived for about ten years in some of the most remote places on the globe, and I savored the local foods wherever I went.  In Brazil I feasted on flank steak from a cow butchered fresh that morning.  In Hawaii I spent the day digging a hole and slow roasting stuffed wild boar.  In Cameroon I learned to appreciate wild porcupine stew.  I lived with people naturally in their small villages while studying the local ecology, and ate what they ate.

It was the Cameroonian Baka and the forest they live in that truly changed my appreciation for food.  One of the world’s oldest surviving hunter-gatherer peoples, the Baka became my friends and guides in the African forest for nearly two years.  For my Masters research, I spent thousands of hours looking through binoculars and scopes observing natural animal feeding behavior.

One day, my Baka guide Michelle came across some edible wild fruit, and started gorging himself on them.  I ate a few – deep red, juicy like an orange, and flavored like a vitamin-C bomb in your mouth – delicious.  I then asked if we shouldn’t bring some back for the rest of the camp.  He laughed, and said “No, if they are here today they are everywhere tomorrow.  Enjoy them like the birds you’ve been watching.  Mangez comme les oiseaux. Eat like the birds.” Eat what is in season. Now. There is no reason to wait, he was saying.

Many years later, my life has come full circle.  Now I can offer rabbit legs for lunch at a popular café without scorn.  My farming childhood has become culturally accepted and even admired – a radical departure from my youth.

The fact that a festival like Slow Food Nation could have been created is due in large part to those various social / cultural forces I have lived with all my life – only now they are starting to become integrated from the edge to the mainstream.

And I know that this integration, which I appreciate so dearly, is possible in no small part to that restaurant born in the same month as me back in 1971 on a sleepy street in Berkeley.  (Thanks Alice).