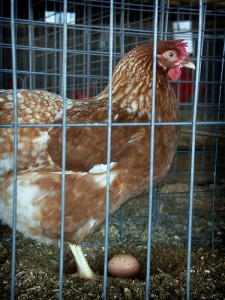 On this side of the Atlantic, however, the story is a bit different. At present, every single egg McDonald’s sells in the U.S. comes from a hen confined in a battery cage—a barren enclosure so tiny, the birds can barely move an inch their entire lives. In fact, according to McDonald’s own U.S. egg supplier guidelines, each bird need have only a mere 72 square inches of cage space—less than a single sheet of paper.

McDonald’s shareholders will soon receive proxies asking them to vote on The Humane Society of the United States’ resolution urging the fast-food chain to move in the right direction on this issue. Only time will tell what they may decide, but if recent history on the battery cage issue is a guide, there’s at least some reason for optimism.

As well, in a landslide November vote, in a voter initiative, Californians approved the Prevention of Farm Animal Cruelty Act — also known as Prop 2 — a new law making it a criminal offense (with a phase-out period) to confine hens in battery cages, pigs in gestation crates and calves in veal crates. California is the top agricultural state, McDonald’s birthplace and home to hundreds of McDonald’s locations. 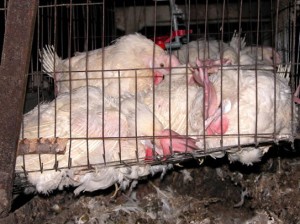 The momentum is certainly on the side of emptying the cages. This progress allows laying hens at least the mere ability to walk around, lay their eggs in nests, and engage in other very basic behaviors denied to battery hens. Hopefully McDonald’s will see the writing on the wall and take a more responsible approach to animal welfare. The company may be lagging behind its competitors on this issue, but it’s always better late than never when it comes to reducing the suffering of animals from whom we take so much.

Photo: above Pork with Bones, below what battery hen cages (the kind raising eggs for McDonald’s) really look like.