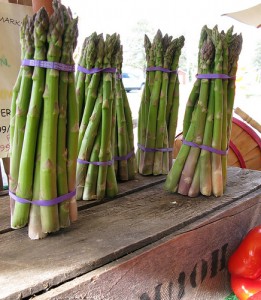 I recently found a bottle of dressing I had made, hidden away in my pantry. Labeled “Blood Orange & Asparagus,” it instantly transported me back a year ago when the bounties of winter and spring collided and became transformed by an afternoon of labor into what I was now holding.

I don’t remember the date last year when I had experienced this gastronomical serendipity, but it’s not hard to guess. The local asparagus season just began in late February as the plants stretch toward the sun. And the California Blood Orange season is at the end of the line in March as the trees offer up their final harvest. I could be months off with these estimates – growing seasons change year to year. But it was the nexus of these two seasons that I managed to capture in a bottle over a year ago; and here we are again.

For the past month I’ve been drinking up blood orange juice, cooking it with chicken or whipping it into custards. And I recently spotted a pile of local asparagus at the market. These two offerings are in tune with the weather – as the wind and rain lash against my windows one day only to be pushed aside by the gentle sun the next.

It is this entire experience of place and season that I felt when I ate my simple salad topped with my hand-made dressing. To be sure, it was a modest effort to make that meal – but that isn’t the point; the point is that I had made it. That alone created its worth.

A recent Harvard Business Review article validated this feeling. Discussing “The IKEA Effect,” the article described how people place an unreasonably high value on products they made or assembled themselves.

But when it comes to food we have become culturally removed from this process of physical involvement, and hence value. In the last half-century, we have reduced the time that we spend preparing our meals by 80%, allotting that time to other pursuits.

Eating my orange and asparagus salad, I understood a simple truth of value. It’s not about money or quality – it’s about connections. To memories, and to experiences, that make us more fully human.

This piece was written for northern California public radio station KQED’s Perspectives series. It can be heard here