Ground-Breaking News: There Will Be a Garden on the White House Lawn | Civil Eats 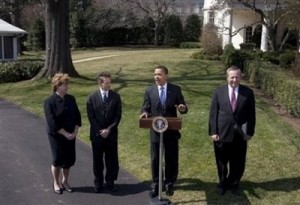 Breaking News: Brian Hartman of ABC News’ The Note filed a report today that confirms that there will be a veggie garden on the White House Lawn.

Mr. Hartman seems to have sent his fellow ABC reporters Sunlen Miller and Ann Compton, who cover insider White House activity, literally into the field to track down a Park Service employee to dish on the dirt project, and they were very successful. A NPS worker who requested anonymity told the two reporters that a veggie garden will be planted on the South Lawn (pictured above), near the fountain, out of the sight-line of the White House. The anonymous source assured Ms. Compton and Ms. Miller that the White House Residence Staff will be handling all details of the garden, rather than Park Service workers, who oversee the rest of the sixteen-acre campus. This indicates that First Lady Michelle Obama will be overseeing the project, because she’s “the decider” for the Residence Staff.

There has been no official announcement from the White House, but for those who have been following the Eat The View and White House Organic Farm Project petitions, each of which has garnered thousands of signatures encouraging a garden on the White House lawn, this is a huge deal. It goes swell as a policy accompaniment to The First Lady’s building nutrition campaign; she discussed how good fresh produce tastes with White House Executive Chef Cris Comerford in their Kitchen Chat for the National Association of Governors Dinner, the text of which has now been reprinted so many times it seems like this is all Michelle discusses. Michelle has also been hinting at a garden for a few weeks, and in the new issue of Oprah’s O magazine, on news stands yesterday, she told Oprah that, yes, there will be a garden. In the same interview, she also mentioned another urban gardening project.

How visible will the garden be to the general public? The garden may be viewable from the street; there’s a little access road that runs between the Ellipse and the South Lawn, which is a frequent gathering place for tourists. Occasionally 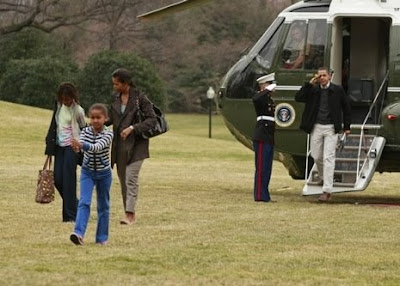 there are press conferences from the South lawn; the pic at the top of the post is from this morning, when The President spoke about economic issues, just before leaving for California. Following the address, the President got on Marine One, his helicopter, which takes off and lands on the South Lawn. Helicopter take-offs and landings are not viewable by the public, for security reasons; the access road is closed during these times, but you can watch Bam fly in from the Ellipse. (In pic: the First Family disembarks from Marine One, on the South Lawn)

In the current down economy, more and more people are turning to gardening to cut food bills, and it seems like ‘Victory Gardens’ are sprouting up everywhere. It’s a terrific move for the White House to adopt a grow-your-own project both as an economic recovery idea, as an example of going green and as an educational tool, as well as a symbol of how crucial Farmers are to America. Having your own garden is also swell, BTW, in the event of bio terrorism, which Ob Fo hates to mention, but new Homeland Security Secretary Janet Napolitano has been very busy revamping personal preparedness policies. A White House garden is also a nod to White House history, and to one of the Founders most important to our ideas of being Americans: Thomas Jefferson planted the first garden at the White House, after all, back in the days when it was still called ‘The President’s House.’

Obamafoodorama wonders if Beets will be excluded, as Bam has a very public dislike of the humble root veg…