Promise in the Pipeline: Peanut Allergies No More? | Civil Eats

Promise in the Pipeline: Peanut Allergies No More? 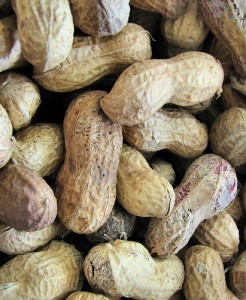 Over the weekend, headlines rocked the food allergy world that a cure for the peanut allergy was in the pipeline.

The Centers for Disease Control recently reported a 265% increase in the number of hospitalizations related to food allergic reactions, highlighting the urgent need to address the health risks and health spending associated with this life threatening condition, and today Dr. Wesley Burks of Duke University was ushered onto the media stage with a hero’s welcome as he promised the “possibility of a cure” within the next few years.

In a study paid for in part by the Gerber Foundation and the Robins Family Foundation (founded by A.H. Robins whose drug and medical device company filed for bankruptcy in the 1908s due to mass litigation over the Dalkon Shield, a faulty IUD product, distributed by Robins who “in a rush to beat competitors purchased the Dalkon Shield without conducting any meaningful independent research on the new IUD, which was marketed by investors as the best contraceptive device on the market”), 33 children were given daily doses of a synthetically derived peanut powder.

In the $17 million study, a peanut powder synthetically derived, engineered in a laboratory and patented by Wesley A. Burks and a handful of doctors is fed to children under strict medical supervision.

According to the United States Patent and Trademark Office, Burks et al. (Hugh Sampson, Monsanto’s Gary Bannon and others) are listed as inventors on US Patent 6486311 – Peanut allergens and methods issued in November 2002. Burks’ patented invention is being tested on children after approval for this study was obtained from the Human Use Advisory Committee at the University of Arkansas for Medical Sciences.

According to filings with the United States Patent and Trademark Office, the “peanuts” being used on the children are derived in the laboratory using the following method:

“Three commercial lots of Southeastern Runners peanuts (Arachis hypogaea), medium grade, from the 1979 crop (North Carolina State University) were used in this study. The peanuts were stored in the freezer at -18° C. until they were roasted. The three lots were combined in equal proportions and blended before defatting. The defatting process (defatted with hexane after roasting for 13 to 16 minutes at 163° C. to 177° C.) was done in the laboratory of Dr. Clyde Young (North Carolina State University). The powdered crude peanut was extracted in 1 mol/L NaCl, 20 mmol/L sodium phosphate (pH 7.0)1 and 8 mol/L urea for 4 hours at 4° C. The extract was clarified by centrifugation at 20,000 g for 60 minutes at 4° C. The total protein determination was done by the bicinchoninic acid method (Pierce Laboratories, Rockville, Ill.).”

Since these “peanuts” hardly resemble the peanuts that we have in our kitchens, blood samples of those being tested were “prepared” to receive the “peanut” in the following way:

The serum pool and patient serum samples were diluted (1:20 vol/vol) and dispensed into individual wells in the lower portion of the plate. After incubation for 1 hour at 37° C. and washing, biotinylated, affinity-purified goat anti-human IgE (KPL, Gaithersburg, Md.) (1:1000 vol/vol bovine serum albumin) was added to all wells. Plates were incubated for 1 hour at 37° C. and washed, and 100 μl horseradish peroxidase-avidin conjugate (Vector Laboratories, Burlingame, Calif.) was added for 5 minutes. After washing, the plates were developed by the addition of a citrate buffer containing O-phenylenediamine (Sigma Chemical Co.). The reaction was stopped by the addition of 100 μl 2N hydrochloric acid to each well, and absorbance was read at 490 nm (Bio-Rad Microplate reader model 450; Bio-Rad Laboratories Diagnostic Group, Hercules, Calif.).

In the current headlines, it is unclear if the Burks’ studies refer to this patented invention (assigned to the Mount Sinai School of Medicine and the University of Arkansas) or to a more recent invention by Burks et al., US Patent 6835824 – Peanut allergens and methods, issued in December of 2004 that does not disclose the assignee of the invention to whom the financial rewards and royalties would accrue which is interesting should the patent prove lucrative as a vaccine or for the invention’s intended uses in the market place as outlined by Burks et al. below:

Still yet another object of the present invention is the provision of a two-site monoclonal antibody based enzyme-linked immunosorbent assay that can be used to detect and determine the concentration of a specific peanut allergen such as Ara h I in a food product or food processing and producing equipment or materials.

Given that the Centers for Disease Control recently reported a 265% increase in the number of hospitalizations related to food allergic reactions, there is an urgent need to address the health risks and health spending associated with this life threatening condition and Burks’ patented invention deserves the accolades that it is receiving.

However, as these doctors, industry funded scientists and researchers engage 33 of our children in a study in which four children successfully built up immunity while four children had to drop out due to extreme allergic reactions to these synthetically derived “peanuts” (while this was not disclosed in Dr. Burks’ press release out of Duke University , it was responsibly revealed in the New York Times), it would be beneficial to learn what the long term consequences might be of exposing our children to these synthetic proteins in the form of food products or a vaccine and if any consideration or analysis has been given to these consequences?

Just as the novel milk protein, rBGH, introduced into our milk supply as a vaccine back in 1994 before being fully evaluated for long term health consequences (elevated IGF-1 levels that have been linked to breast, prostate and colon cancers) has resulted in a revision to the rBGH position statement by the American Cancer Society, perhaps, as these doctors bring their inventions to market, we should consider the health implications, liabilities and costs associated with exposing our children to yet another novel protein and synthetic substance before the long term health consequences have been evaluated.

And as beneficial as this patented “cure” may initially seem to children, their families, the food industry and vaccine manufacturers, it would be interesting to see the cost-benefit analysis and the evaluation that Burks et al. conducted on the liabilities associated with his invention.

According to the New York Times, Robyn O'Brien is "food's Erin Brockovich." As the founder of AllergyKids, an organization designed to protect the 1 in 3 American children with autism, allergies, ADHD and asthma, Robyn has appeared on Good Morning America, CBS Evening News with Katie Couric and CNN highlighting the role that chemicals in our food supply are having on our health. Born and raised in a conservative Texas family on supply side economics and the Wall Street Journal, Robyn earned a Fulbright Fellowship, an MBA and served as an equity analyst on a multibillion dollar fund prior to moving to Boulder, Colorado with her husband and four children. She is the author of the book, The Unhealthy Truth: How Our Food Is Making Us Sick and What We Can Do About It. Read more >