Another Take on the Grass-fed Controversy | Civil Eats

Another Take on the Grass-fed Controversy 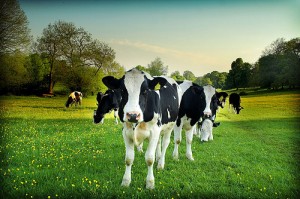 This piece caused a flap on Civil Eats a couple weeks back and it got people talking, which is what is supposed to happen here. Responsible and passionate meat wholesalers and processors like Marissa Guggiana, who believe animals should be raised humanely in ways that are healthy for eaters, the soil, the water, and ecosystems weighed in, as did many readers.

As many commenters pointed out, the study I cited didn’t compare grass-finished animals raised the way Dave Evans at Marin Sun Farms or Joel Salatin raise theirs. It’s true that beef raised on pasture and fertilized by the animals can sequester carbon, but the problem is with the animals themselves. Ruminant animals emit methane gas, no matter what you feed them or how they are raised and the producers who use integrated pasture management techniques instead of chemicals are a minority. Methane gas is said to be 21-23 times more effective at warming the planet than CO2. For a long time I thought grass-finished beef was much better for the environment because of how it’s raised.

But strictly from a global warming perspective, I no longer believe that is true. The piece I wrote was about my own struggle with the ethics of eating meat (as it relates to the animals themselves and the environment—especially global warming) and the progression of ideas from the people who have influenced me and many others. Coming to terms with ruminant animal’s contribution to climate change is the next phase in the progression of my personal meat-eating ethics.

There are several producers local to my area who do it right. I will gladly eat the meat they provide (once in awhile). I am not now and have never been a vegetarian. I know that many Civil Eats readers feel the same and are members of meat CSAs and farmers’ market shoppers, friends of ranchers, or ranchers themselves. And I commend them.

It’s the other people I worry about.

In the face of a very real globalized, industrial food system, what choices will they make at the meat counter? Case in point: my local grocery store in Berkeley carries 3 different brands of grass-finished beef. One is from Uruguay, and the other two from the US, at least one is from California. Consumers who have a vague knowledge that grass-finished beef is more sustainable and healthier for them, will likely choose based on cost or where the beef is from. Not only will they not know how this beef was raised, but it won’t really matter from a methane emissions standpoint. We don’t even have to get into the environmental issues around buying beef from Uruguay. It’s a complex issue promising to get even more muddled as demand for sustainably raised meat grows and grocery and super stores get into the game. There will be a race to produce grass-fed beef as cheaply as possible through the same market forces that make organic milk at Wal-Mart affordable and organic only to the letter of the law. The latest news on global warming has me convinced that we cannot afford to simply replace grain fed animals with grass-fed ones. We need to eat a lot less meat. Or figure out how to deal with the methane.

Not everyone who wants to join a meat CSA can, due to supply constraints, and then there are plenty of people who wouldn’t care to. It’s about the methane as well as the transportation issues and the inefficiency inherent in eating animals instead of plants. I don’t advocate slaughtering all farm animals and requiring that everyone live on plants, but I think that we need to talk about this, and bring it out in the open so we can step up our already considerable efforts to develop a food system that is more sustainable and does not contribute more than its fair share (whatever that means) to global warming. Since livestock activities are said to be responsible for 18% of all greenhouse gas emissions, cows seem like a good place to start.