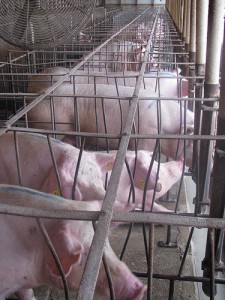 In his weekly address Saturday, President Obama announced that he had put together a “Food Safety Working Group,” whose focus will include fostering communication between federal agencies in order to make sure food safety policies are being enforced, starting with “closing loopholes” that have up to now allowed sick downer cows to make their way into the food system.  The goal, he said, is to ensure that the food we eat — including Sasha’s peanut butter sandwiches — are safe from contamination.

But while the Peanut Corporation of America recall is perhaps one of the largest and most dramatic recalls in our country’s history, the story is not a new one: its part of the continuing saga of food safety SNAFUs in the U.S. I would argue result from the use of band-aids in the food system instead of addressing the root causes of contamination.

According to the New York Times article covering the President’s address on Saturday, around 76 million people take ill after eating contaminated food annually in the U.S., while hundreds of thousands are hospitalized and about 5,000 die.  That is 1/4th of our entire population off work, in bed, recovering from a contaminated meal.

The discussion of MRSA seems an apt segue.  Today, Nicholas Kristof penned his second column this week in the New York Times focusing on the upswing in MRSA in humans, which seems to be stemming from the nontherapeutic use of antibiotics in agribusiness pig feed. MRSA is an infection caused by a “superbug,” a bacteria that has developed a resistance to all the drugs we have tried to throw at it.  Pigs seem to be incubating MRSA: research from the University of Minnesota suggests that 25 percent to 39 percent of American hogs carry the bug. (Naomi Starkman reported on the correlation between MRSA and pigs on Civil Eats in January) And as Kristof wrote in his first column on pathogens at factory farms Wednesday, it was hardly a coincidence that around fifty of the inhabitants of a small Indiana town (population 500) near large pig operation facilities were coming down with MRSA — an infection that kills 18,000 annually, more people than die in the U.S. from AIDS.

Unfortunately, beyond being given growth hormones, livestock are kept alive in crowded and unsanitary conditions by being preemptively given a number of drugs in their feed. Without the drugs, the animals would probably die before they made it to your plate.  Therefore, the drugs are effectively shielding a larger problem in the food system: factory farms are too big to produce adequate, safe food.

To understand the sheer amount of drugged animals there are in this country, Kristof’s article states that in North Carolina alone, more antibiotics were given to animals than were administered to every person in the United States in that same period. The bottom line is that overexposure to antibiotics means antibiotic resistance — and Kristof points out that The Infectious Diseases Society of America has declared this a “public health crisis.” It has been proven that land fertilized with the manure of drugged animals has resulted in concentrations of antibiotics in vegetables, so is it so hard to imagine the myriad ways eating the antibiotic-doused livestock could be directly affecting our health over time?

“So Mr. Obama and Mr. Vilsack, will you line up to curb the use of antibiotics in raising American livestock? That is evidence of an industrial farming system that is broken: for the sake of faster-growing hogs, we’re empowering microbes that endanger our food supply and threaten our lives.”

For food policy advocates, the Food Safety Working Group is cause for a huge sigh of relief.  It appears that food safety was the way to get the public’s attention on the issues facing our food system all along, as its plays right into our inherent ability to respond to fear. Everywhere you look these days the talk is e. coli, salmonella and now MRSA contamination via pigs.  As a result, people are reading labels and questioning the food supply more than ever before.

But the battle for Obama, Vilsack and the Food Safety Working Group will be hard-fought.  Already, the pork lobby is holed up in meeting rooms trying to spin Kristof’s beast of a story.  The good news is that food advocates are not backing down on the pathogens-as-harbinger-of-a-broken-food-system story. U.S. Congresswoman from New York Louise Slaughter plans to reintroduce a bill in the House to ban nontherapeutic use of antibiotics this week.  And on Monday, HBO will air “Death on a Factory Farm,” a documentary exposing the realities of the way animals are treated in massive confinement operations, beamed straight into American living rooms.  Another documentary, Food, Inc., will debut in June — and while it successfully breaks down the problems our food system faces on the whole, food safety is a huge part of that discussion.  A factory producing so-called fixes like ammonia-laced meat filler is shown as the processors’ answer to contaminant-free meat. Another portion of the film features a mother seeking to change food safety laws beginning after the death of her two-year-old son from an e. coli infection following the ingestion of a hamburger at a fast food restaurant.

It is high time we change a system that is not working — the evidence keeps mounting that tweaking the system as it stands will never be enough to ensure eaters are safe; we must fundamentally alter how we bring food to our plate.  As David Murphy wrote on Civil Eats last week, “food safety cannot be cloned, genetically modified, implanted with an electronic chip, medicated or irradiated into being.”  There is no easy answer, but I hope President Obama will stay true to his commitment to bring the heads of federal agencies together, and honestly work to strengthen food safety in America.  We must reconsider — and rethink — the model of farming that has enabled us to produce the cheap food that is making us sick.  The American public is ready, willing, and asking for this change.