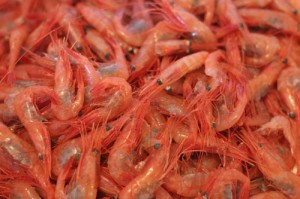 Up until a few years ago I was part of the problem, and didn’t even know it.  I was blindly buying shrimp for my restaurant and personal consumption without paying attention to its origin.  I was oblivious to how shrimp was caught and transported.  And I couldn’t tell you the advantages of wild caught vs. farmed sources.

Now I look back on those days of Shrimp Naiveté with dismay. In general, I’m not an absolutist.  For example, 45% or the vegetables I currently buy at my cafe are local (pretty good for still being winter), and most are organic.  But not everything.  But when it comes to shrimp, I have drawn a firm line in the sand – keeping farmed and imported shrimp firmly on the other side of my door.

Shrimp were only recently thought to be an inexhaustible supply of protein, a miracle food that would feed the world.  I learned from an excellent article in Orion magazine by Jim Carrier that “shrimp have been around since Gondwana. Their tracks are found alongside dinosaurs’, which explains their astounding diversity—more than two thousand species in every body of water in the world.”

They have relatively complex life histories for such diminutive creatures and scientists have only recently been able to untangle the intricacies of their life cycle. This knowledge opened up the doors to shrimp farming operations. These have quickly spread around the world and facilitated shrimp in becoming the most-eaten seafood item in the United States.

While shrimp farming sounds good on paper, in practice it is riddled with problems. Primarily, the problems come from the high concentrations of shrimp that are farmed in one area. This high-concentration scenario makes these shrimp farms equivalent to aquatic Concentrated Animal Feeding Operations (CAFOs), with many of the same problems as their terrestrial cousins: 1) toxic levels of concentrated waste, 2) problems with infection leading to the administration of antibiotics, antifungals, and other chemicals, 3) destruction of the surrounding habitat to produce or collect adequate food supplies, and 4) the direct destruction of fragile mangrove swamps and other coastal areas for farms. While many of these issues have been addressed by certain shrimp operators, as a rule the farms are incredibly destructive. Wild shrimp are a much better bet.

We commonly eat a handful of different wild shrimp species here in the United States. There are two major wild populations: a Warm Water group of species in the Gulf of Mexico and the South Atlantic coast, and a completely separate Cold Water group of species that live off the Oregon and Washington coastline.

The environmental issues with shrimp fisheries fall into five categories, as analyzed by the Monterey Bay Aquarium’s Seafood Watch program.  These are:

2) Status of Stocks (have they been over-fished)

4) Habitat and Ecosystem Effects (does the shrimp fishing destroy the ocean floor?)

5) Management Effectiveness (are we doing everything that we can to protect the species?)

Each different species and population of shrimp has a unique combination of the above factors. For example, the Gulf and Atlantic shrimp are rated as “High Concern” in the Bycatch category, “Moderate Concern” in the Habitat and Ecosystem Effects category, and low concern for the other three. The Seafood Watch summarizes these shrimp as a “Good Alternative” overall.

In contrast, the there are many species of Cold Water shrimp (but not all) that are rated “Low Concern” in all five categories, and the population overall is therefore rated as a “Best Choice” for shrimp eaters.

In particular, Oregon shrimp represent the top of the shrimp pile for a number of reasons. But these shrimp are obviously targeted for people on the West Coast. If you’re living farther East or South, it may indeed make sense to buy from Gulf and Atlantic populations. In particular, buy from reputable operations who respect the ocean and try to minimize the impact of their bycatch.

If this sounds a little confusing, I admit that it is – and even this discussion of the issues is greatly simplified. There is no “one simple answer” that solves the shrimp conundrum. But one thing is for certain – in the future we’re going to have to pay more for, and take more care as we purchase, these tasty little creatures from the sea.