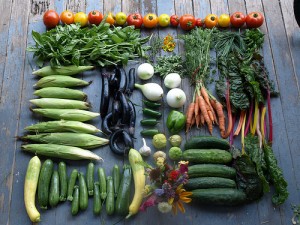 Just as we were comfortably settling in with the knowledge that local is in–and Monsanto, out—a flock of tenacious academics taunt us to move past such simplistic thinking. The answers can’t ever be so easy, can they. But for those eager to be shaken from a locavore-worshiping stupor, last week’s Tasting Histories conference celebrating the opening of the Robert Mondavi Institute for Wine and Food Science at the University of California, Davis was a venerable weekend-long cocktail party of well-established and rising scholars from across the country dedicated to the study of food—many of whom unabashedly invoked the theme of the local within our eating practices, both contemporary and historical.

With few universities granting official status to food studies or food science departments (UC Davis is one exception), on whose shoulders does it fall to define the boundaries of the contemporary study of food? Who can we expect to engage the big questions, particularly as they pertain to localizing agriculture? It’s a necessarily inter-disciplinary subject and also one that has been marked territory of late by many notable non-academics speaking to a broad audience hungry for knowledge about our food systems. Historians, sociologists, anthropologists… have they all been remiss? Au contraire. Academics rarely are, and the convening of Tasting Histories was a brief but powerful assertion that those researching food have much to say. On obesity and GMO’s, bread lines and milk and wine, scholars pushed us to think thematically about food in shifting and complex ways. Many of those speaking at this event threw light on the messy spaces where capitalism, culture, and science collide to show us that our cozy categories of benevolent local and hegemonic global are often romantic, sometimes ignorant, and have antecedents that can’t be ignored.

Susanne Friedberg, Professor of Geography at Dartmouth College and author of the forthcoming book Fresh: A Perishable History, challenged us to think about the contemporary contradictions inherent in our local food logic during her keynote address, aptly titled “After Taste.” For much of the 20th century, food miles were a status symbol, worn proudly by highly perishable foods desired by privileged eaters who could afford the costs that traveling refrigeration incurred. Consumers in general, especially the rising American middle class in the first half of the 1900’s, were trained to appreciate and buy the ephemeral, and thus perishable, items in the marketplace. These foods have always been marketed as having more “taste,” in both the little t and capital T sense. The new food authorities tell us that foods that are cheap and also global have no taste, Friedberg said, and we must instead eat the food grown closer to home. But as she also noted, Friedberg herself a long-time farmer’s market devotee, so many people in the world are on the wrong side of this enlightened 21st century eating practice. The farmers she bought vegetables from in Burkina Faso, which she also called home for a year, so desperately wanted to sell their fresh beans to the markets of Europe rather than distribute them locally for pittance, which they were forced to do when the beans were declined by Europe for not being “fresh” enough.

Darra Goldstein, Professor of Russian at Williams College and Editor of Gastronomica, struck a similar but slightly optimistic tone in her commentary on talks given by graduate students on seeing world history through food. How do we complicate globalization, she asked, how do we find the “positive potential within the global marketplace?” Goldstein acknowledged the existing tensions between the global and the local, as did her panelists’ comments on indigenous Australian food products being marketed worldwide and the historical creation of a New World culinary heritage in the English colonial Atlantic as it intersected with Creolization. These distinctive foodways are inherently situated within macro-scale social and economic processes, as are many of the ‘local’ foods that we’ve come to exalt at our markets today. Goldstein proposed that we should perhaps find ways to remain global within our local economies—is it possible that the world could be entirely de-globalized, she asked? Is this even desirable?

Charlotte Biltekoff, Professor of American Studies and Food Science at University of California, Davis, suggested in her commentary that we shift our attention from the sole significance of our daily routines and towards the broader systems and structures in which they are embedded. On a talk given by Richard Alvarez of University of California, San Diego on the history of plant transfers by the USDA, Biltekoff asked: what happens when we stop ignoring the historical origins of our agricultural practices and the power dynamics that have created the current landscape of what we consider to be ‘local’ food? Can re-inserting history into our conceptions of current food systems “shift our thinking away from the behavior of consumers, toward the larger systems and structures of power that a focus on ethical consumption obscures?” she asked.

Alice Waters, Michael Pollan, et al. may still be carrying the torch for many now-enlightened eaters but some of us have moved on. Or perhaps we were just never completely satisfied with the Omnivore’s Dilemma narrative in the first place. This is not to say that Pollan, and the ever-widening crowd of writers and speakers who have taken up the locavore chant, don’t speak eloquently, even passionately, about the need for alternatives to our industrialized, unjust food system. Indeed, credit is due here for grabbing the attention of many who might have never thought about the phrase “industrial food system” at all. Nor is this to say we should surrender the last of our winter root vegetables and stock up on canned food from China.

The point is really that that the food narrative circulating now, and the daily work of civic participation in the food system, doesn’t come to a rest with us eaters simply knowing where our food comes from. In fact, that’s only one beginning to a multiplicity of narratives that seek to ensure the well-being of our planet and our bodies. There are more complicated and ultimately more compelling stories unraveling out there than the one that pits the local against the global, that imagines a neat and bridgeable gulf between producers and consumers. We must understand globalization not only as an oppressive abstraction but also as a cross-cultural dialogue between people the world over who need to eat. These fresh ways of thinking about foodways also highlight challenging class, race, and even gender politics that have been largely neglected for too long. May a forward-thinking and historically-attuned body of food scholarship continue to help us all see that messy complexity, to think beyond the categories we’ve created… and to ask the hard questions.