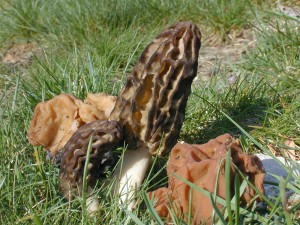 Right about now, the forests of North America are starting to come alive. Two-legged creatures, not sighted in the woods since around this time last year, can be spotted moving about in a stealthy fashion or crouching…on the lookout…for quarry of a fungal sort. And with good reason! Many folks who are too busy to set foot in a woodland at any other time of the year are right now heading out into the wilds of North America to pursue the prized morel mushrooms.

Although tricky to find (their drab coloration blends in very well with the shades of brown on the early spring forest floor), morels are probably voted #1 on the tastiness scale by mushroom hunters and gastronomes, alike. Plus, along with their springtime brethren (wild ramps and wild asparagus), they form a “holy trinity” that is the basis for some of the most amazingly tasty food that can be foraged at any time during the year. But how does one know where to look…and what to look for? And how can you be sure you’re about to pick an edible mushroom and not merely a poisonous lookalike?

We mycologists are glad to see an increase in curiosity about wild mushrooms; nevertheless, mushroom poisonings continue to occur as many amateurs are unable to properly identify safe edible types. A beginner should try to find a veteran mushroomer to accompany during your first morel forays. An experienced morel hunter will take you into the woods at the right time, which varies depending on where you live but usually occurs from early April to the first of June for much of the upper range of North America. Also, a seasoned morel hunter will know where to look. In a good year, it’s true that morels can occur just about anywhere. But you will always have much better luck searching the most favorable habitats: around old, dying, or recently dead American elm and white ash trees, in the Midwest; very old apple orchards are good bet anywhere east of the Rockies; and burned forests in the western mountainous zones.

Morels occur very early in spring when few other types of mushrooms are up, lessening your chances to pick something dangerous. However, the false morels are also fruiting at this time, and as their name implies, they (arguably) look similar to true morels. And they are poisonous. Foray sensibly! While small, there is a real chance of finding and consuming poisonous mushrooms. Never take a chance on eating a mushroom that you’re not absolutely certain of: when in doubt, throw it out!

And what of those poisonous false morels? Well, I do want to emphasize that they are poisonous. That being said, the false morels have long been collected and consumed by mushroom foragers. (In fact, I’ve eaten them. In the past. I have not done so for a long time and don’t plan to consume them anymore, now that I know a lot more about the hazards.) False morels go by other, less sinister names like beefsteak morels. It seems that with lots of cooking, the toxic compounds (called “gyromitrins”) may be volatilized and driven from the mushroom, rendering them safe-ish for consumption. In his book Morels, Michael Kuo points out that people are poisoned every year by consuming false morels and that deaths have occurred. Again, I strongly recommend avoiding them.

How can you tell a false morel from a true morel? It’s actually pretty easy, as they don’t look that similar (see photo). True morels range in color from various shades of light brown to tan to almost white, and are gray when they first emerge; there are very dark brown to black species as well. False morels are typically reddish. And morels are very characteristically deeply pitted in appearance, reminiscent of a natural bath sponge; false morels have no pits but are more wavy or brain-like in appearance. And the final way to tell the difference is by slicing in half (which you will want to do in the kitchen prior to cooking, as bugs and millipedes like to hang out inside morels on occasion). Morels are always completely hollow from bottom to top. False morels never are; they may have hollow parts but not entirely.