Grade “A": Getting rbGH Out of School Milk | Civil Eats

Grade “A”: Getting rbGH Out of School Milk 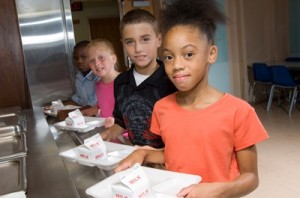 CNA authorizes the National School Lunch Program, providing schools with reimbursements for food purchases like fluid milk and supplying schools with surplus foods, like butter, cheese, ground beef and grains. According to the National Milk Producers Federation, nearly 430 million gallons of milk were distributed to schools during the 2005-2006 school year.

Roughly 15 percent of U.S. dairies inject cows with the synthetic growth hormone called rbGH (or recombinant bovine growth hormone) that increases milk production. According to F&WW, it’s possible that at least 84 million gallons of milk from rbGH-treated cows were distributed through the school nutrition program during 2005-2006—or about 1 in 5 pints of milk offered in school cafeterias nationwide.

rbGH has been linked to increased rates of infections in dairy cows, elevated antibiotic use, and unresolved questions about its links to serious human health risks, including cancer. Canada, Australia, New Zealand, Japan and all 25 members of the European Union have banned the use of rbGH, and the Codex Alimentarius, the United Nations’ main food safety body, twice decided that it could not endorse the safety of rbGH for human health.

Growing consumer concern has brought changes in the marketplace as major dairies and milk producers and retailers, such as Wal-Mart and Kroger, have made a commitment to go rbGH-free. Universities, institutions and hospitals are making the change as well, and schools are the next logical step.

F&WW is working on legislation that will make it easier for schools to purchase milk produced without rBGH. Right now, schools are required to accept the lowest bid on a milk contract that meets the school’s specs and food service buyers often don’t realize that they can specifically request rBGH-free milk in the bid. This legislation will clarify that they have this option. Often times the current choices are not always the most nutritious, as public schools receive just $1.13 per child per lunch in federal funding; some states contribute additional funds, but many do not, leaving school food service directors to “squeeze water from a stone.”

“This is not promoting luxury milk,” said Noelle Ferdon, Senior Organizer for the Food Program at F&WW, which recognizes that many school districts are already cash-strapped. “This is a no-cost administrative change in the CNA that would help schools make choices that respond to the needs of students, parents and communities. rBGH-free milk is now cost competitive in the marketplace in large part because of consumer and retailer preference for this milk.”

Many school districts have been able to procure rbGH-free milk—in fact several school districts have built rbGH-free milk into their nutrition or wellness policies—but many districts don’t know they have the option to specify the type of milk they want to buy. As long as standard competitiveness procedures are followed, F&WW wants school food services to have the option to procure milk from cows not treated with this controversial artificial growth hormone.

“Our children’s health should not be put at risk by their being made to consume rbGH milk at school,” said Ann Cooper, a chef and school food advocate with Lunch Lessons LLC Food Family Farming Foundation.  “Legislation must be put into effect that eliminates artificial hormones and antibiotics from all milk served in school cafeterias all across the country – our chidren’s health depends upon this.”

As for nay-sayers that think there might not be a rbGH-free milk supplier in the district, Ferdon says this hasn’t been an issue as all of the areas have suppliers of rbGH-free milk.

The group has rallied leaders in the environmental, health and food and education movements to write a national coalition letter, which will be presented to Congress on Wednesday, March 11, “National Know Your Milk Day.” That day, supporters can also call their representatives and ask them to include language in the Child Nutrition Act clarifying that schools can purchase rbGH-free milk. In addition, you can also host your own local Day of Action on March 11th to support this effort.