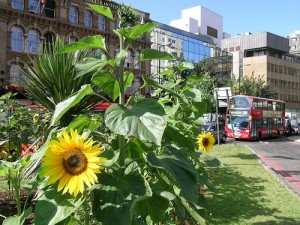 On a sunny afternoon last week, the day before a winter rainstorm rolled into San Francisco, I hit the streets with a bagful of “seedballs”—little dry balls of compacted clay, compost and seeds (in this case, native wildflowers). Whenever I happened upon an abandoned lot or a scrubby patch of soil around a tree in the sidewalk, I tossed in a seedball and hoped the next day’s rains would be heavy enough to dissolve the clay, stir in the compost and effectively plant the seeds. With every toss, a voice that could only have been Thomas Jefferson’s proudly rang out, “Cultivators of the earth are the most valuable citizens,” but no one else seemed to hear it, or even to notice what I was doing, which was a little disappointing. I wasn’t out to get arrested, but I suppose I had hoped people would be paying more attention to the goings-on of their neighborhood and would question me littering in their yards.

That might have been vain, but it’s not far from the real reason people like me guerilla garden: to grab attention. Guerilla gardeners plant in public spaces, sometimes illicitly, in order to challenge passerby to notice and engage in their environment. While always political, guerilla gardening is rarely confrontational: tossing seedballs, we gardeners believe, is more productive than breaking windows. The media stereotype of the guerilla gardener as a radical anarchist reclaiming the commons is, like all stereotypes, untrue in practice. David Tracey, author of Guerilla Gardening: A Manualfesto, told the San Francisco Chronicle that the gardeners he’s met cover the demographic spread of “young and old, renters and homeowners [and] different social classes.” What unites them is a commitment to improving their local community.

For example: In 2002, elderly residents of a garbage-ridden street in one of San Francisco’s roughest neighborhoods were fed up with waiting for someone else to fix their problems, so they went out and planted flowers in a traffic median. People noticed, a few joined in, and before long the median was lush with plants, crime was down and the Quesada Gardens Initiative, a community group, had been founded. Alemany Farm, a four-acre urban farm in San Francisco that employs youth from a neighboring housing project, has a similar story. The Verde Partnership Garden in Richmond, CA started when a group of Laotian refugees took a weekend and turned a trash-filled lot into family plots for growing the food they had known back home. There are countless more examples, and they’re certainly not all in California; every major city has hungry or civic-minded residents who’ve tried to make up for their neighborhood’s failings by guerilla gardening.

Right now is a particularly good time to be guerilla gardening. Spring is coming, the soil is fresh and there’s ample rain, in some parts of the country, to water your projects. But there’s another reason I say it’s a good time, and it’s a political reason. Aaron French has made the case on Civil Eats that the government’s “shovel-ready” stimulus projects should include growing food in areas where both jobs and real food are rare. He’s absolutely right, but the idea isn’t catching on; as he points out, Van Jones, the Oakland activist and President of Green for All, didn’t mention food once in a recent presentation on green jobs before congress. Food isn’t sufficiently on the radar of environmentalists, of social justice advocates, of city planners or of politicians. Those of us who recognize the need for community food projects have to chart out the territory for them before we can expect any financial or logistical backing to roll in.

In this economy, moreover, food and hunger organizations lack the funding to start new gardens in the communities that need them most. Allow me to channel Obama for a moment: This year, there’s only one place hope exists, and that’s in we the people, in our collective will. It’s time we stepped in, arms laden with seeds and shovels and buckets of clean soil. If we can’t write checks, we can organize ourselves, we can dig into our neighbor’s backyards (preferably with their permission) and we can sow those seeds of hope. Never underestimate the power of active, engaged citizens – bolstered by a sunny spring afternoon – to turn an improbable project into inescapable evidence that our will and our ability to get things done are still this country’s greatest assets.

The next time you’re out walking in your neighborhood or you’re standing in your backdoor and you see unplanted land (whether its yours or not), imagine what you can grow this spring. Think of the plants that do well in your area, or are suited to guerilla gardening: peas, beans, sunflowers, squash, tomatoes, collards, kale, radishes, even just native flowers (which usually don’t need to be watered). If you’re worried about toxins, plant something that’s good for the soil, like fava beans, and don’t bother eating them. Invite your friends over to make seedballs. Plant an empty lot with flowers, and when they bloom, write the owner and ask if you and the neighbors can cultivate food. Put out containers on the sidewalk in front of your house and plant them with herbs. Let the vines of pea plants climb up your railings. Plant your roof. Plant traffic medians. Plant the front yards of foreclosed houses. Replant the landscaping at strip malls. Hop fences, if you have to, or hang flowerpots on them. Start carrying seeds in your pockets. Start right this moment.