What Next? A Peak-Oiler Gives Some Perspective | Civil Eats

What Next? A Peak-Oiler Gives Some Perspective 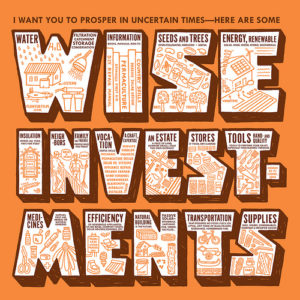 The Peak Oil story was never about running out of oil. It was about the collapse of complex systems in a world economy faced by the prospect of no further oil-fueled growth. It was something of a shock to many that the first complex system to fail would be banking, but the process is obvious: no more growth means no more ability to pay interest on credit… end of story, as Tony Soprano used to say.

There was a popular theory among Peak Oilers the last decade that the world would enter a “bumpy plateau” period when the global economy would get beaten down by peak oil, would then revive as “demand destruction” drove down oil prices, and would be beaten down again as oil prices shot up in response — with serial repetitions of the cycle, each beat-down taking economies lower — the only imaginable outcome being some sort of quiet homeostasis. This scenario did not play out as expected. It was predicated on a mistaken assumption that all systems would retain some kind of operational resilience while ratcheting down. Anyway, the banking system was mortally wounded in the first go-round and the behemoth is dying hard.

The last desperate act of the banking system in the face of Peak Oil’s no-more-growth equation was to engineer species of tradable securities that could produce wealth out of thin air rather than productive activity. This was the alphabet soup of algorithm-derived frauds with vague and confounding names such as credit default swaps (CDSs), collateralized debt obligations (CDOs), structured investment vehicles (SIVs), and, of course, the basic filler, mortgage backed securities. The banking system is now choking to death on these delicacies.

The trouble is that the EMT squad brought in to rescue the banking system — that is, governments — can’t remove these obstructions from the patient’s craw. They don’t want to drown in a mighty upchuck of the alphabet soup.

The collapse of complex systems is actually predicated on the idea that the systems would mutually reinforce each other’s failures. This is now plain to see as the collapse of banking (that is, of both lending and debt service), has led to the collapse of commerce and manufacturing. The next systems to go will probably be farming, transportation, and the oil markets themselves (which constitute the system for allocating and distributing world energy resources). As these things seize up, the final system to go will be governance, at least at the highest levels.

If we’re really lucky, human affairs will eventually reorganize at a lower scale of activity, governance, civility, and economy. Every week, the failure to recognize the nature of our predicament thrusts us further into the uncharted territory of hardship. The task of government right now is not to prop up doomed systems at their current scales of failure, but to prepare the public to rebuild our systems at smaller scales.

The net effect of the failures in banking is that a lot of people have less money than they expected they would have a year ago. This is bad enough, given our habits and practices of modern life. But what happens when farming collapses? The prospect for that is closer than most of us might realize. The way we produce our food has been organized at a scale that has ruinous consequences, not least its addiction to capital. Now that banking is in collapse, capital will be extremely scarce. Nobody in the cities reads farm news, or listens to farm reports on the radio. Guess what, though: we are entering the planting season. It will be interesting to learn how many farmers “out there” in the Cheez Doodle belt are not able to secure loans for this year’s crop.

My guess is that the disorder in agriculture will be pretty severe this year, especially since some of the world’s most productive places — California, northern China, Argentina, the Australian grain belt — are caught in extremes of drought on top of capital shortages. If the US government is going to try to make remedial policy for anything, it better start with agriculture, to promote local, smaller-scaled farming using methods that are much less dependent on oil byproducts and capital injections.

This will, of course, require a re-allocation of lands suitable for growing food. Our real estate market mechanisms could conceivably enable this to happen, but not without a coherent consensus that it is imperative to do so. If agri-business as currently practiced doesn’t founder on capital shortages, it will surely collapse on disruptions in the oil markets. President Obama at least made a start in the right direction by proposing to eliminate further subsidies to farmers above the $250,000 level. But the situation is really more acute. Surely the US Department of Agriculture already knows about it, but the public may not be interested until the shelves in the Piggly-Wiggly are bare — and then, of course, they’ll go apeshit.

The recent huge drop in oil prices has left the public once again convinced that the world is drowning in oil — if only the scoundrelly oil companies were forced to deliver it at reasonable prices. The public has been consistently deluded about this for decades. What’s missing so far is for the president of the US to lay out the reality of the situation in a dedicated TV address. I know a lot of you think that Jimmy Carter already tried this and failed to make an impression (and ruined his presidency in the process). I guarantee you that Mr. Obama will have to do this sometime in the next few years whether he likes or not, and he’d be well-advised to get it done sooner rather than later. And by this I don’t mean just vague allusions to “energy independence” or “renewables” in speeches devoted to many other issues. I mean telling the public the plain truth that we’ll never offset oil depletion and the intelligent response is to do everything possible to transition to walkable towns and public transit, not to sustain the unsustainable.

The alternatives — i.e. what we’re trying now — is to further delude ourselves into thinking that we can run WalMart and the suburbs by some other means than oil. Despite all our investments in these things, we won’t be able to run them by other means, and the news about this had better get out before enormous disappointment turns into titanic rage. If Americans think they’ve been grifted by Goldman Sachs and Bernie Madoff, wait until they find out what a swindle the so-called “American Dream” of suburban life turns out to be.

On this blizzardy week in the power centers of America, attention is fixed on the never-ending fiasco of AIG — a company whose main product turned out to be credit default swaps, and is now choking on them. Kibitzers on the sidelines of finance are forecasting a king-hell bear market suckers’ rally in the stock markets followed by a belly flop to Dow 4000 or lower. I myself called for Dow 4000 two years ago — and was obviously a bit off on my timing. All this is surely trouble enough. But while your attention is focused on Rick Santelli in the Chicago trader’s pit, or Larry Kudlow desperately seeking “mustard seeds” of new growth in financials, try to let one eye stray to the horizon where these other complex systems are working out their next moves. Farming. The oil markets. These are the coming theaters of alarm and distress.

Image: Card designed by PJ Chmiel, a designer and activist who maintains a great site with resources for each of the suggestions he makes on the card.

James Howard Kunstler is the author, most recently of "The Long Emergency" and the post-oil novel "World Made By Hand." His writing on peak oil and other matters can be read on his site, Clusterfuck Nation. He lives in upstate New York. Read more >