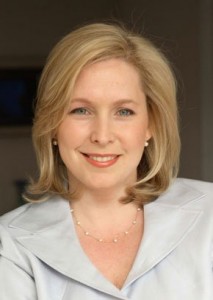 Newly minted US Senator and member of the Senate Agriculture Committee Kirsten Gillibrand (D-NY) and New York State Senator (and retired dairy farmer) Darrel Aubertine wrote Secretary of Agriculture Tom Vilsack a letter on February 26th asking that the USDA re-evaluate what is considered “processed” for the food in the national school Fresh Fruits and Vegetables Program (FFVP).  No, these two senators are not lobbying for the Corn Refiners Association — they are pushing for local food.

FFVP was created by the USDA in 2002 to allocate more fruits and vegetables, served as “snacks” outside the school lunch and breakfast programs, to students at lower-income schools all over the country.  Thus the kids most at risk for obesity and diabetes get access to fruits and veggies.

One complication: much of the fruits and vegetables served to students outside of the lunchroom will need minimal handling before getting into student hands, lest apples become baseballs.  But cafeterias are not prepared time-wise, skill-wise or workman’s comp-wise for this endeavor, not to mention that cafeteria kitchens are at best giant reheating stations.  So for the time being, to get the freshest food it is best to outsource the cutting and bagging to a local value-add facility or local producer, until we build better infrastructure and train our cafeteria ladies to cook.

The FFVP was continued by the 2008 Farm Bill, which allows a “geographic preference for the procurement of unprocessed, locally grown and raised agricultural products,” for school lunch, breakfast and snack programs, as long as a competitive price is maintained.  But the Farm Bill also states that “de minimis handling and preparation might be necessary to present an agricultural product to a school food authority in a useable form.”

But as a part of Bush’s midnight regulations in January (when he and his cronies essentially trashed things further before heading out the door), his USDA Food and Nutrition Service re-defined what is considered “processed,” including that which is chopped, sliced or diced — effectively blocking fruits and vegetables from local sourcing, and from the hands of those who need real food the most.

Clearly Bush officials were taking liberties with the wording. From the Farm Bill:

Of course, we’re not talking about local Wonderbread or cheesedoodles here.  Chopped apples, carrots, broccoli and their ilk, prepared nearby, will now lose this market share to the big ag processors simply because of wording.

From Gillibrand and Aubertine’s letter:

The Fresh Fruit and Vegetable Program requires these snacks be served outside of standard school meal programs. Therefore, it is illogical to prohibit local produce as “processed” simply because it is in a form that can be served to students outside of the lunchroom.

Unlike most midnight regulations, this effort shouldn’t require a change of policy, but just a re-wording.  So if it’s so simple, why hasn’t Vilsack responded?  Maybe he would argue he has a lot on his plate.  Time will tell if Vilsack can impress the Real Food Lobby (that’s you, eaters with a conscience everywhere) with decisions that improve our food system, or whether he’ll continue to bolster big business in food and entertainment.