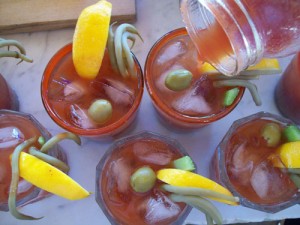 A friend’s recent milestone birthday became the excuse behind a winter food retreat, where eight people joined together to simply relax, cook and eat. The stunning venue, a cabin with a sprawling deck perched atop a steep ridge on Hollister Ranch near Santa Barbara, CA, certainly aided in why this gathering felt so special. The characters assembled had an impact as well: the artist offspring of a famous California winemaker, two young farmers, a magazine editor, a sustainable wine company entrepreneur, a five-year old girl and two chickens. Unrushed conversation, lazy beach combing, outdoor bathing, and idea sharing steered the weekend towards a refreshing renewal of community…but the meals together added focus, as they always will, and took center stage. Potluck style, each person arrived bearing tote bags full of edible contributions, resulting in memorable menus at each and every meal.

This summer, while on hiatus from normalcy, I worked with Slow Food Nation in San Francisco while my better half Dave remained a country mouse at our property in the Santa Cruz Mountains. Tomato vines, walls of beans, and tangles of squash blossoms were his company in my absence, and with the extra time on his hands, he took the reins on the canning front. I returned to find a pantry full of jars in every shade, and tales of his experimentation. These products resulted in one of our contributions to the party, and what we like to call “Farmstead Bloody Mary’s.”

The key to creating unsurpassed levels of flavor and a distinct difference to this easy to botch brunch beverage is by utilizing summer’s bounty all year long. The time in the hot kitchen pays off when you can taste it during the cold winter months, and a bit of foresight will prove a wonderful reward for you and your fellow imbibers. If you don’t happen to have some open space to plant your own ingredients, just pick up a few extra pounds of produce from your favorite local farmer and get busy. Choose a day or two to dedicate yourself to the canning process, maybe invite some friends over to make it festive, and before you know it, your shelves will be stocked. All you really need is a couple of big pots, some jars, lids and rings (available at most hardware and garden supply stores), a dish towel or two, tongs, and counter space. Sterilize the jars by boiling a bit, pack with your food of choice, seal, and then boil again. Remove from water and set out on the counter to cool. That’s it. There are recipes galore on the ins and outs of pickling, canning, and preserving. Read a couple to get the gist of the basics and then jump in; it’s totally worth it.

Blanch, peal, blend, strain, salt and can the resulting tomato juice. Blanch and pickle the green beans with apple cider vinegar, salt, and a large sprig of tarragon. Wait a few months until you really miss these two ingredients. In a pitcher, combine the tomato juice, vodka, the juice of one lemon, and the hot sauce and Worchester to taste (If you really want to homestead things up, make your own of each of these sauces). Add salt and freshly ground black pepper to taste. Select your glassware and pack generously with ice cubes. Line each rim with a slice of lemon, stand up a few green beans and half a stalk of celery per glass. Pour in your tomato mixture and sip luxuriously. Bacon, pancakes and eggs are nice additions, so is a deck on the edge of the world.