Lying, Smoking, Drinking, Big Ag: Why The Disney-USDA Partnership For “Healthy Eating” Is A Dangerous Alliance 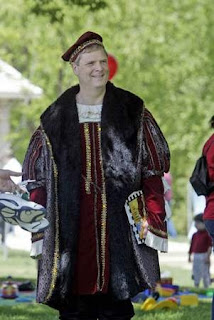 Our very bizzy Secretary of Agriculture, Tom Vilsack, has partnered with the Disney corporation to use the characters from Pinocchio to promote the USDA’s Food Pyramid, as part of his goal to reduce childhood obesity in America. New television, radio, print, outdoor, and online ads have been created by Walt Disney Studios Home Entertainment to remind families of the value of healthy eating and exercise. But Bizzy V’s trip to Fairytale Village is one of his more misguided policy plans. (Yes, that’s Ag Secretary Vilsack in the pic, in a private moment…)

It’s almost difficult to choose which one is the worst of the monster problems with the Disney/USDA partnership. First, there’s a terrible problem with Pinocchio in general. As a film, Pinocchio is a bizarre acid trip with a wildly complicated and disturbing subtext, more a prettily drawn nightmare than anything else. It’s a violent tale of man-boy love that involves a singin’ & dancin’ cricket, a murderous whale, a goldfish, a mute cat, a fairy, and a Coachman who lures little boys to Pleasure Island. The lead character, Pinocchio, is literally a spineless creature devoid of all moral fiber who is repeatedly drawn into all manner of excruciating situations in which he always makes the wrong choice. And Pleasure Island is filled with “real” boys who are gambling, smokin,’ drinkin’ and committing acts of vandalism. They’re eventually turned into donkeys who go to work in salt mines. When it debuted in 1940, Pinocchio became enormously popular primarily for its then-astonishing technical brilliance in animation, rather than because it was a bracing tale of redemption and love.

From a contemporary standpoint, Pinocchio has little to offer children in terms of life lessons–and it certainly offers no lessons about food (unless being swallowed by a whale somehow qualifies…). And as a role-model character for children to identify with, Pinocchio is just bad, bad, bad throughout the flick. So it just has to be asked: Why choose a lying, naughty puppet to attempt to get children to eat more healthfully? What kind of whack message does this send? And here’s another excellent point: Pinocchio dies in the Disney film. He doesn’t turn into a Real Boy because he eats healthy food, he dies. He’s brought back to life as a Real Boy by the Blue Fairy. There’s no food involved. Hey, where’s the Religious Right when you need ’em?

Second, direct marketing anything to children with storybook/film/TV characters has been the subject of grave debate for at least a decade. Many studies have pointed to the deleterious effects of consumerism on children, and the long and continuing association of popular/animated characters with unhealthful foods is gradually being phased out by forward-thinking corporations that have responded to parents’ demands. The Disney company itself dropped McDonald’s from its character-food partnerships last year. Is it really wise to renew the use of characters to promote any kind of eating? And this “policy” also goes against Ag Secretary Vilsack’s own statements that food should be regarded as energy. If food is energy and thus utilitarian, what’s wrong with teaching about food as food? Why do we need naughty animated characters to get in on the act? Why do we need to romanticize food at all? Most children know so little about food in general–how it’s grown, how it’s prepared–that adding in twisted animated creatures seems like an exceptionally perverted way to get this point across. But maybe Vilsack has other goals here. Vilsack’s nom as Secretary of Agriculture was hotly protested by all those who worried about his deep connections to Big Ag and industrialized corporate food giants, in particular Monsanto. How much of Disney’s food atheir theme parks and resorts is sourced from Big Ag giants like Monsanto and Dupont, Cargill or Archer Daniels Midland? How much of Disney’s food is processed, laden with pesticides, non-sustainable, or genetically engineered? Partnering the USDA with Disney gives both sides a free pass to continue to explore and exploit least-favorable food and ag practices, doesn’t it? All under the guise of healthy eating for children, of course.

Third, the Food Pyramid as the best model for healthy eating is still the subject of great debate. The government recently flipped the pyramid on its side and added an exercise element to it after years of criticism, to account for the fact that the pyramid just ain’t that great. In comparison to the government sponsored food advisories in other countries, the US falls very short. But perhaps a lying puppet can promote exercise, too? Or maybe the Blue Fairy? She flies around a lot…. And, too, there are at least twelve different versions of the US Pyramid in existence, which are based on regional, socioeconomic and cultural differences. Is a lying white boy puppet really the right character to reach the children most at risk for obesity about healthy eating, if we put aside the very idea that the film this campaign is based on is entirely morally bankrupt? 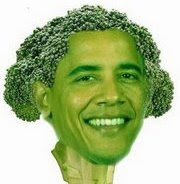 Lastly…Bizzy V is privileged to be the Ag Secretary for the most scrutinized eater on the planet, so what’s wrong with Brand Obama? Not Obama-shaped cookies, necessarily, but the idea that what The Obamas eat can have a positive impact on the rest of the country. And while there are all kinds of reasons that much of the Obamas’ private eating should remain private, a single photo of Barack and Michelle holding fresh veggies would go much further than Pinocchio characters promoting “healthy” eating. Brand Obama has caused a huge bump in the sale of American products around the globe, and we know school kids loooove Bam and Michelle…. It’s a far better idea than using animated characters from a questionable fictional source.

Very happily for both Bizzy V and Disney, March 10 just happens to be the 70th anniversary of the animated film version of Pinocchio, so both sides of the devil’s partnership get lots of excellent publicity; the movie is being released on new tek platforms next week, so look for a flood of Pinocchio-related hysteria. As ever, Bizzy V continues to disturb and delight Ob Fo, but the partnership of Disney with USDA is more dangerous than it is hilarious. An excellent line from the film, uttered by The Coachman, could apply to Bizzy V: Give a bad boy enough rope, and he’ll soon make a jackass of himself. Policies like the Food Pyramid/USDA partnership are the worst kind of jackholedom.

*A little film that’s even more scary than Pinocchio: From Freedom Underground, a brief history of Vilsack & Agribusiness. Narrator Jack Blood gravely dislikes Barack, but everything onscreen about Vilsack is true. Click here to watch.