Mediating the Honeybee-Citrus Conflict in California 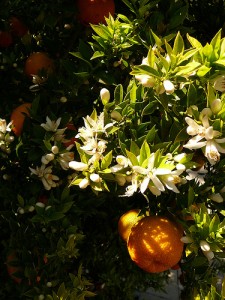 Over the past few years, I’ve noticed that it’s gotten more and more difficult for me to get a steady supply of California oranges for juice at my cafe. I keep getting offered oranges from Florida, from Texas, and from Mexico. I have nothing inherently against any of those locations, and wish them well with their citrus crop, but I’d prefer to buy what’s in my home state.

Joel Nelson, from the trade association California Citrus Mutual, says that I am not imagining this shift. The story is this: back in the winter of 1998 there was a big freeze over Christmas that destroyed 85% of the California citrus crop that year. To fill the empty space on the shelves, stores and wholesalers started to import fruit from Europe, mainly Spain. These Spanish fruits were mostly seedless mandarins, and in no time this Spanish fruit became a favorite with consumers. The next year when the California crop was back in action, they were given less shelf-space and the imported fruit was here to stay.

In response, many California growers started to plant varieties of seedless mandarins– also known as tangerines or clementines. The trees take about five years to mature, and the first crop hit the market around 2005.

This is where things started to get ugly. In an unfortunate twist of fate, a serious of biological and economic factors have joined forces to pit the new seedless mandarin industry against beekeepers.

What, you say? Citrus growers against beekeepers? Aren’t bees necessary to pollinate the plants to grow the fruit? In this case, the answer is no. In fact, when the bees do pollinate the fruit they cause seeds to form inside the otherwise seedless oranges, and seeds reduce their value.

There are about 350,000 beehives kept permanently in California. Another 650,000 are trucked in from other states for pollinating services that are essential for the almond and stone fruit crops. Almonds are blooming in February, and then the bees are moved over to stone fruit orchards for the month of March. Starting in April or so, the bees need a new place to go before clover and summer crops come into flower in late spring.

Traditionally, they were moved adjacent to citrus orchards. Everyone loves the sweet taste of Citrus Honey, and while they aren’t necessary for orange production they were causing no harm.

But that’s for normal citrus – with new varieties of mandarins that have been planted the bees have gone from being a welcome guest to an unwelcome intruder, according to Nelsen. Up to 30-35% of the mandarin crop, Nelsen says, is destroyed by the bees. The crop then gets used for juice at a small fraction of the price it would get going directly to market.

After the 2005 season things got testy between these two groups. By 2007 the California state legislature mandated the California Department of Food and Agriculture to form a working group to mediate the dispute. Both sides claim that they are the victim here. The bee industry is just doing what it has always done. The citrus industry is trying to adapt to new market conditions, and they claim they never wanted the bees in their fields in the first place.

The CDFA just released “draft regulations” (Initial Statement, Notice of Proposed Rulemaking [PDFs]) to try to resolve the conflict, the result of several years of work. They are asking for 45 days of input from all interested parties, after which time the rules will become permanent.  The draft regulations state:

These regulations are intended to address the obligation of the Department of Food and Agriculture to address coexistence issues related to production of seedless mandarin varieties in close proximity to the apiaries of beekeepers. Seedless mandarin growers mitigate that some apiaries increase the risk of crop cross-pollination resulting in the presence of seeds in their fruit. The regulations adopted herein shall be limited to Fresno, Kern, Madera, and Tulare counties and may include the establishment of fees, not to exceed the cost of the program, to be paid by seedless mandarin growers.

The draft regulations will require beekeepers to register their locations with country commissioners, and limit hives within two miles of mandarin groves.

We shall see this April how these regulations play out with both interested parties. Steve Lyle, Director of Public Affairs at the California Department of Food and Agriculture believes that these new rules should solve the problem, and said there was no pending lawsuits that he knew of that would affect this process.