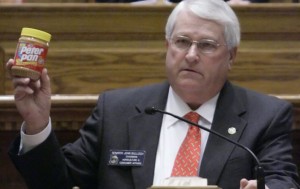 As new peanut butter products are added to the recall list, more public school lunch programs are being red-flagged. Add South Carolina, Arkansas, Kentucky, Missouri, Oregon and Texas to the list of states whose school cafeterias received products that originated from the salmonella-tainted Peanut Corporation of America.

They join Idaho, California, and Minnesota, which were recently alerted by the USDA that their school-lunch inventories included products from the company responsible for killing eight people and sickening 500. Those three states were already late to receive official word of the contamination – Idaho schools officials were told to pull the peanuts from their inventories two weeks after American companies began a voluntary nationwide recall.

Would there have been an easy and quick way for the public to know that the Peanut Corporation of America was the source of one of the national school lunch program’s staples? There should have been, but the answer is no. It takes some online digging even to turn up the USDA’s list of approved packaged goods providers – i.e., the folks who take the raw materials and process them into entrees, pastries, condiments and other ready-to-eat fare. Once I located the list, I saw that it includes three peanut butter vendors: Velmar Foods of Phoenix, Ariz.; J.M. Smuckers of Akron, Ohio; and Integrated Food Service of Gardena, Ca.  A Velmar representative told me that the USDA information is wrong – the company doesn’t process any peanuts (“It should say, ‘beans’ ”). I already knew that J. M. Smuckers has no products involved in the recall. That left Integrated Food Service, and from its representative I learned that the company had indeed received USDA “diverted product” from the Peanut Corporation of America – over a year ago. Long before Integrated got an email from the State of California alerting it to the recall, the finished product had been shipped out. The good news is, no schoolchildren got sick from eating it. The bad news is, that was sheer luck.

As it happens, Integrated also processed beef that came from Westlake-Hallmark, the California meat packer caught last year slaughtering “downer” cattle. The USDA ordered about 140 million pounds of beef pulled off the market – the largest recall in U.S. history – but not before about 20 million pounds had been served up in school lunchrooms.

When Alice Waters and I began writing an article on the problems with the current National School Lunch Program, I consulted nutrition and food-service authorities and, of course, relied on the web sites of the USDA and its affiliates for up-to-date information. An overview of the National School Lunch Program appears in dozens of USDA-related documents, most of them referencing the commodities program that forms the backbone of the public-school lunch menu. But in searching for the answer to one central and seemingly simple question – How do we track commodity food back to its source? – I came up empty. In light of the peanut crisis it’s a more important question than ever. The USDA’s food-safety notification process is cumbersome and flawed, and this latest crisis is further proof that more food served under the auspices of the National Food Lunch Program should be locally sourced.