Sticky Business: Taking Care of Bees in the City 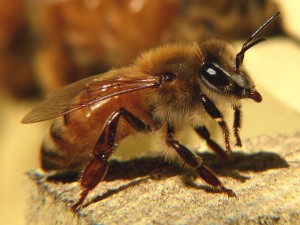 I’ve always admired honeybees for their elegant cooperation, and of course because they make more honey than they need out of sheer industriousness, which I love to eat.  So I was excited when I heard that I could learn to keep bees myself, in the city. (after the jump: how to build a hive)

For the past few weeks, I’ve been attending the basic course for beekeepers given by the New York City Beekeeper’s Association.  The focus of the course, which will be given again in March (but is currently taking names for the waiting-list only), was on the order of the hive, hive maintenance, the diseases that can affect a hive and how to treat them without chemicals, how to build your own hive, managing swarms, and when and how to collect honey.  But there was one catch: this is an illegal activity in New York City.

Chicago has beehives on the roof of City Hall, and in other cities like San Francisco and Atlanta, beekeeping within city limits is permitted.  But here in New York, the health code disallows the keeping of “venomous insects.”

Luckily we have the food advocates at Just Food taking the lead with their petition to legalize beekeeping in New York, who have also found an ally in Councilman David Yasskey, who put forward a bill that would override the health code and make beekeeping legal.  He spoke to the New York City Beekeeper’s Association on Sunday about his proposal, in which he describes beekeeping as an economic and environmental enterprise. He spoke about honey-gathering as a small business, an alternative for those struggling in this economy.  “With bees come flowers,” he added, going on to say that beekeeping is a part of building a greener city.  As a second-tier approach to the problem, Just Food has worked to encourage a re-evaluation of the health code, which will be taking place this summer.  Unfortunately, this is not in time for beekeepers to feel at ease in mounting their new hives this April.

Many beekeepers have been keeping bees covertly in the city for years, including many of the members of the association.  The threat they face is a fine of up to $2000, though this is rarely enforced.  Enforcement follows a complaint by the neighbors, who might assume that bees are like wasps, and sting without reason.  But Italian honey bees of the variety used by beekeepers in the city, Apis mellifera ligustica, have been selectively bred for gentleness, disease resistance and industriousness.

While I have yet to find a place to keep bees myself, preferably cooperatively (like in a community garden), I do plan to take part in as many “hivings” (introducing bees to their new home), inspections, and honey collections as I can this year.  Hopefully, my helpfulness will render jarred, sweet rewards.

Check back here for updates on the legal status of beekeeping in New York City, and for more posts about visiting city hives.

The class watched on Sunday at the Tompkin’s Square Park Greenmarket as our instructors, the family beekeepers Andrew and his father Norm, showed us the art of building a Langstroth hive.  The Langstroth is the most commonly used hive-type, and that is because it has mastered the concept of “bee space,” allowing just enough area between frames for bees to pass so that they won’t build a bridge of comb, which makes it more difficult to inspect the hive.  The wood being used is locally grown and milled in Maine.  It is cut into individual pieces, which you then hammer, glue, paint and stack, and voila! You have a home for your new “pets.”  Here is the photographic explanation on building the “deep,” or the main partition where the bees will produce the honey for their food and where they will raise their larvae: 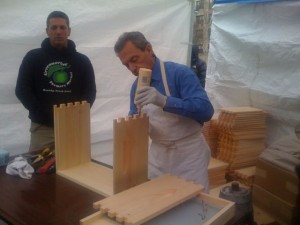 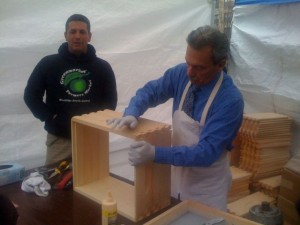 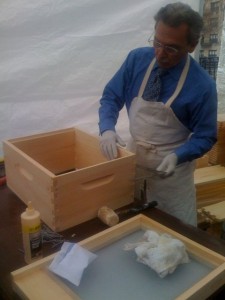 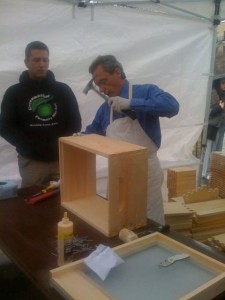 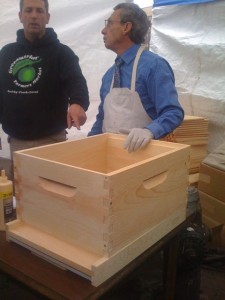 Inside the deep will be placed the frames: 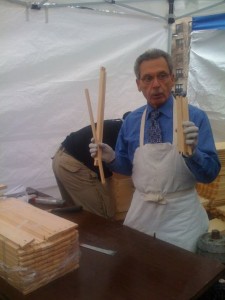 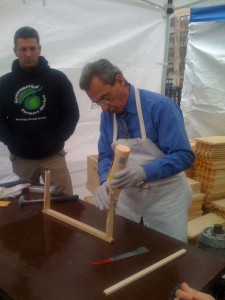 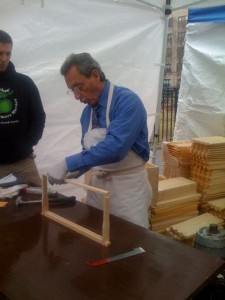 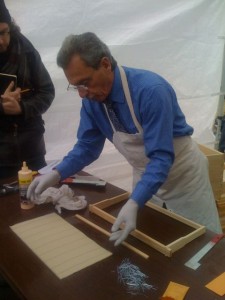 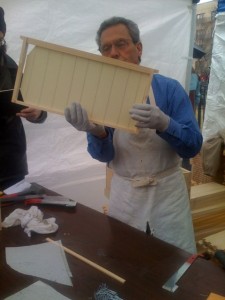 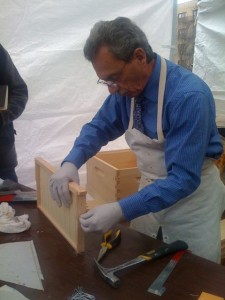 Then you do the process over again for another deep, so the bees have room to grow into the hive and will be less likely to swarm, and a “shallow,” a smaller box where you might have honey to eat by August.