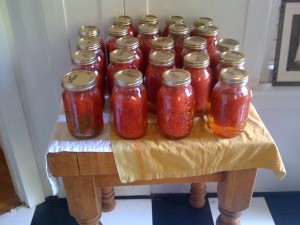 “I do not pretend to give such a Sum; I only lend it to you. When you… meet with another honest Man in similar Distress, you must pay me by lending this Sum to him; enjoining him to discharge the Debt by a like operation, when he shall be able, and shall meet with another opportunity. I hope it may thus go thro’ many hands, before it meets with a Knave that will stop its Progress. This is a trick of mine for doing a deal of good with a little money.”

-Benjamin Franklin in a letter to Benjamin Webb, 1784

These are normally the times when I cook, when days start to lengthen just enough to give one hope. I have noticed some things about how it is I always can, even when money is tight, and I don’t skip joyfully to the market daily. I think cooking well and simply without worrying about costs relies on the same hard-to-swallow concept as the most trusting kind of charity: you must pay it forward.

Cooking, against what many people think, doesn’t depend on the best recipes or having the right ingredients. It relies on having things lying around to cook with. I stock my shelves much like my mother has, keeping the same things that she did, stored in similar ways. My mother’s orientation in the kitchen is simple and sound: everything she buys, cuts, cooks, or stores, she does with a hope and keen eye toward a future meal.

There were always soaked and cooked beans frozen in little bags in our freezer. Whenever my mother decided to make fava beans or chickpea salad, she would cook at least twice as many and freeze what she didn’t need. Any tough outers from escarole or fennel would be stored alongside carrot peels and onion skins for a week and then dropped in a pot of water and simmered for an hour or so, strained, and frozen alongside. Leftover slices of bread were left to stale and then ground into crumbs (also frozen), or stacked side-by-side and frozen themselves, to be toasted and spread with butter and jam whenever my brother and I started to complain. Bananas nearing their end: frozen for an afternoon snack; leftover oily water from stewing artichokes or beans, stored in the refrigerator until the next day’s dinner and then used to cook the carrots, or add to the stew or drizzled over basmati rice. My mother spent money on good bread and fresh produce freely, though it must have worried her in the moment. But she seems to have known that when each loaf, bunch, or head pays for itself threefold, there’s no limit to how much you can afford to spend on one of them. The math is easy. I do it now and it works out without fail: $10/pound broccoli is a laugh when the florets are dinner, cooked through and tossed with last summer’s chilies and dried pasta and then all of it topped with those frozen bread crumbs, toasted with lots of oil; the stems diced, sautéed, and simmered in water to be tossed with rice, eaten on their own, or turned into soup; and any liquid left kept for the base for another soup, with leftover bits of other vegetables, stale bread, and a parmesan rind for heartiness.

There were the things that couldn’t be saved, and those were happily discarded. A sprouting potato should never be used, or frozen, or saved. But leftover pasta was allowed to be reheated in a pan and an egg cooked onto it, and rice was prized as the basis for at least two meals to come.

It is as easy, in the middle of the summer when making basil or mint pesto to make some extra without the cheese and store it, frozen. It seems atrocious to do when the sun is beating across the deck, but you’d be amazed how grateful you’d be to have it to dollop onto bean soup (made with cooked, frozen beans, vegetable stock you’ve made nearly for free, and a few tomatoes from a jar put up last August—I haven’t even gotten into tomatoes.)

The point is the same as it is with nearly everything: without being puritanical, save a little bit of everything, and throw nothing out. If it’s gotten to the point of rotting, chuck it, but take note of what you could have done to avoid it. Any bone can be turned into a whole second meal, just as good, if not as easy to glorify, as the one that featured its meat. Every kale stem can be quickly pickled and later diced and dropped on top of a pureed vegetable soup; every beet or turnip green can be washed well and sautéed in olive oil and mixed into an omelet or better, served by itself on toasted leftover bread drizzled with more olive oil and served next to the last pieces of some delicious cheese.

It is not expensive, I mean to say, to buy one bunch of kale, if its stems will later turn a boring meal into one you’d want to come home to and you’ll remember fondly. A chicken bought for $4 a pound doesn’t seem expensive when it gives you your first meal, provides scraps of meat for on top of soup or salad for your second, and its feet, bones, and head offer themselves up for a stock to be made into a third, fourth, and so on.

By the same token, if a $8 dozen of eggs seems obscene, consider what a bargain the eggs are if they make yesterday’s tomato sauce or pasta or rice not only edible but exciting today.

And for expensive things like herbs, the few leaves you use in one dish might not justify the purchase of the bunch, but the pounded herb oil you make by grinding them with some salt and covering them with oil to drizzle over chicken soup or eggs or toast makes it more than worth it.

For what is it we’re looking for when we cook, other than to be excited, to be nurtured and to worship and be worshiped back. It’s just a little bit of the sublime we hope for, and we imagine high food prices portend for what the sublime costs. It’s true and not; the bigger cost is the faith that another meal’s around the corner. If you truly believe it is, preparing the meal should be a question of quickly reaping the benefits of your own prudence. I don’t know how I would cook a meal without the bits and pieces I’d saved from meals before. I can’t imagine how I would write a recipe for any of them; it would not taste as good, never mind what it would cost, to start from scratch every time. It does seem, though, that thinking about it this way, learning to cook saves more money than it could ever cost, for whatever trials one has to endure in the learning.

Old Bread, Sauce, and the Heat of the Bone

(Save the insides of crusty bread, then you won’t feel bad about scooping it out for a more robust vehicle for sauce)

Scoop the bready insides out of a round dark, heavy rye bread. Toast the crusty ends and spread them with butter. Scrape the remainders from a sauce pot, adding a little more tomato to get any stuck bits up. Remove any final meat and fat bits from between small bones of a blade, or short ribs, or whatever is in your sauce. Scoop all of it onto the toasted, buttered bread.