Who Owns Our Food? Thoughts on a New Green Revolution | Civil Eats

Who Owns Our Food? Thoughts on a New Green Revolution 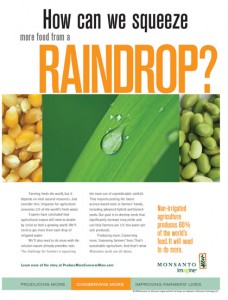 Seed and chemical giant Monsanto and friends have lately been conducting all-out re-branding campaigns, seeking to present themselves as the answer to world hunger and the actualization of sustainability.  As an extension of this tight message control, Oxfam is hosting a panel discussion at the Asia Society in New York tomorrow at 8:30 am called “The Global Food Crisis – Time for Another Green Revolution?”  But the discussion seems like it will be rather one-sided.

Perhaps this group is convening to pat each other on the back for their role in bringing forth a similar Green Revolution to what we have seen before.  In any case it is clear there will not be a considered critique of the role genetically modified seeds have played in increased farmer debt, and by extension, farmer suicides worldwide; the increase dependence on international food aid due to a reliance on monocropping (growing one single, usually inedible-before-processed crop — or worse, growing something like BT Cotton, which is totally inedible); and not to mention, a stripping of the fertility of the land, contributing to desertification and climate change; and waning GM crop yields that have resulted in the face of proven increased productivity of organics over time.

Tom Philpott pointed out the lopsided nature of the panel on Comfood:

If Oxfam wants a real debate or even a robust discussion, where are the agro-ecologists, the organic ag folks on this panel? Has Oxfam never heard of the International Assessment of Agricultural Knowledge, Science and Technology for Development (IAASTD), which — under the aegis of the World Bank, of all institutions — took an extremely skeptical position viz. patented transgenics as a solution to climate change-related ag problems in the global south? Or the recent UN report finding vast potential for low-tech organic ag in Africa?

The debate is on for whether we actually need a new Green Revolution, and if so, what that should look like.  I spoke with Raj Patel a few months back for a piece about our perceptions of GM seed.  He spoke then about his discussion with panelist Rajiv Shah that was quoted in the New York Times Magazine, and he had this to say:

“I absolutely think we need a sustainable Green Revolution.  But it has to be with the kind of technology that Vandana [Shiva]’s working with, or Via Campesina is working with.  An agroecological revolution is one that isn’t just about what chemicals and what genes to use in the fields, but changing our relationship with the earth. That’s not something that the Gates folk are ready to hear (we’ve tried). Moreover, though, there’s something very wrong about a private foundation doing something that should be government policy – and the only reason it isn’t government policy is because governments have been prevented in the past 30 years from doing this sort of agricultural work and research. I’d say if something is to be sustainable in Africa, shouldn’t Africans be involved, rather than the passive recipients for US largesse (which hasn’t worked out very well).”

Apparently, we are not the only ones scratching our heads about plans for the new Green Revolution.  Seemingly preemptive to the meeting at the Asia Society tomorrow, the United Nations Environment Programme (UNEP) released a study on Tuesday called the “Environmental Food Crisis: Environment’s Role in Averting Future Food Crises,” which suggests that we begin to think more ecologically about food waste and infrastructure.  UN Under-Secretary-General and UNEP Executive Director Achim Steiner: “We need to deal with not only the way the world produces food but the way it is distributed, sold and consumed, and we need a revolution that can boost yields by working with rather than against nature.”

They suggest “managing and better harvesting extreme rainfall on continents such as Africa, alongside [giving] support to farmers for adopting more diversified and ecologically-friendly farming systems – ones that enhance the ‘nature-based’ inputs from pollinators such as bees as well as water supplies and genetic diversity.”  The report also speaks rationally about water scarcity, organic production capacity, re-organizing the food market structure and removing crop subsidies.  Check out this great article from Inter Press Service about the report for more perspective.

Needless to say, I will be present at the discussion in the morning, looking forward to (and a bit freaked out about) standing up for all of those voices who have no say in how their land is developed under the auspices of philanthropy, by those whose pockets have the potential to be lined by this little experiment.  Please join me at th Asia Society, I will be outside at 8:00am, somehow making myself known (Late twenties with an iPhone addiction, and I won’t be bothered if you approach me — unless you are a Monsanto exec), and will be livetweeting the event on my twitter feed, featured in the right-hand side panel on Civil Eats.

UPDATE: Doug Gurian-Sherman, a Senior Scientist of the Food & Environment Program at the Union of Concerned Scientists (UCS) is speaking tomorrow at the Asia Society panel, instead of Rajiv Shah.