Pity the Fool Who Messes with COOL | Civil Eats

Pity the Fool Who Messes with COOL 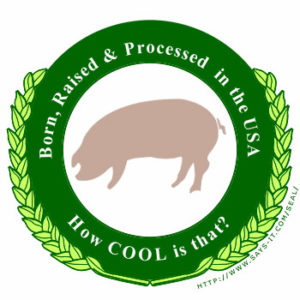 Agriculture Secretary Tom Vilsack told several consumer groups yesterday in a conference call that he will ask the meat industry to voluntarily follow stricter guidelines for new package labels designed to specify a food’s country of origin. If the industry does not comply, the administration will write new rules, reported the AP.

Mandatory country of origin labeling (also known as “COOL”) for meats, fish, produce and peanuts went into effect on September 30, 2008. President Obama ordered a review of the rule before it becomes permanent, which had been scheduled for March 16. Vilsack said he would like to see labels that would give consumers a clearer idea about the origin of the animal or food and also said the regulation should cover more foods.

In general, consumers have overwhelmingly demanded COOL, with nearly 92 percent of Americans agreeing in a Consumers Union poll that imported foods should be labeled by their country of origin.

“COOL gives consumers a tool they can use during a food safety crisis,” said Jean Halloran, Director of Food Policy Initiatives for Consumers Union. “For example, when California leafy greens were implicated in cases of e. coli illnesses, if COOL had been in effect, consumers could have purchased Canadian spinach without worrying.”

While COOL is a huge step forward, there are large loopholes that the majority of consumers have wanted closed. For example, Congress exempted meat and poultry sold in butcher shops and fish sold in fish markets—some 11 percent of all meat and fish— from country of origin labeling. (For a nifty guide as to what’s been defined as COOL and what’s not, check out Consumers Union’s COOL Tool.)

In addition, the rule exempts processed food, and the Bush Administration interpreted that very broadly, to include roasted, salted, and smoked food and mixed ingredient foods, like fruit salad. Vilsack has proposed narrowing that definition. He’s in good company, as a recent CU poll found that 95 percent of consumers want processed foods to be labeled by their country of origin.

The leading opponents of the law have been grocery stores and large meatpacking companies—many of whom mix U.S. and Mexican beef—and other businesses involved in getting products to supermarkets. Supporters of the law were not happy with the Bush administration’s version of the rules, which they said allowed meat companies to be vague about where an animal was born, raised and slaughtered.

The move comes as Obama is headed on Thursday to Canada, a key meat exporter to the U.S. The Canadian government has criticized strict labeling rules on meat in the U.S., fearing that American consumers would prefer homegrown beef, and is likely to raise objections to Mr. Vilsack’s plans.

Canada would resume its World Trade Organization complaint against U.S. labeling rules for meat and fresh produce if Obama decides to change them, Canadian Agriculture Minister Gerry Ritz told Bloomberg news. “Should the Obama administration continue on with protectionism, we will then re-ignite our WTO challenge,” Ritz said.

In regard to the trade sensitivities, Vilsack told Congress Daily that President Obama would personally deal with trade issues during his visit to Canada and indicated that any final decision on changes to the labeling rule would be made at the White House.

Uncertainty about what changes will be proposed was heightened this morning when USDA abruptly canceled a press teleconference on the issue, which had been scheduled for 10 a.m. ET.  We will keep our readers updated as the news on COOL develops.