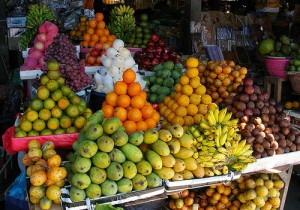 When I travel, I do the normal tourist things: I visit the most unusual museum I can find; I sample the local delicacies like fried ant thoraxes and cow stomach soup; I buy items of clothing in the vain hope that they will help blue-eyed red-haired me fit in. Then I visit the grocery stores. This grocery store shopping is less a search for provisions than it is an anthropological expedition. I get a lot of strange looks when I whip out my camera in the middle of the produce section (I can almost hear onlookers thinking “has that silly gringa really never seen potatoes before?”). But really, is it so strange to look to the stomach when trying to comprehend an unfamiliar culture?

At present, I am grocery shopping in Medellin, Colombia, where I can relax in the farming off-season and enjoy the fact that fruit is apparently NEVER out of season in this city of perpetual spring. Fruits and vegetables are everywhere here: served up by the cupful on the side of the road, spilling onto the sidewalk from tiny tiendas, and filling the ample produce sections of the grocery stores. I am initially drawn to Colombia’s most successful home-grown grocery chains, Exito and Ley, out of curiosity inspired by their names, which translate respectively as “Success” and “Law.”

Exito is the Super-Target of Colombia. In truth, Exito has got a few points on Super-Target, as my neighborhood branch here contains an in-house travel agent for Avianca (Colombia’s national airline), and a small motorcycle dealership. It is also one of the most fruitful grounds for food anthropology. Paisas, the people of Medellin, seems to be torn between the desire to lead long, healthy lives (embodied by the fruit, which everyone eats all the time) and the desire to go out in a blaze of gastronomic gluttony (as evidenced by the discovery of microwaveable packages of pork skins, rather like microwave popcorn. In fact you can find every fried food item imaginable here).

Exito is packed with shoppers buying beans and avocados and arepas and chorizo for the Saturday family meal. I make a beeline for the produce. During the U.S. growing season, I’m an apprentice farmer on a small, organic fruit and vegetable farm, so I’m always curious to scope out the local flora. I’m also inquisitive as to whether organic agriculture has caught on in Colombia. I encounter spiny watermelon-sized guanabanas, lusciously juicy tree tomatoes, and deceptively ugly cherimoyas, but none of the main displays say anything about production methods. I finally locate lettuce that purports to be grown using agricultura natural, but when I stoop to read the fine print, I learn that this means that it was grown using clean water. I won’t ask what that means about the rest of the lettuce. Some sad looking packages of strawberries, beets, and a few more leafy green comprise the rest of the organic section. I miss the farmers market back home. But then again, the bananas are really delicious.

Several days later, my friend takes me to La Minorista, a massive semi-enclosed maze of small vendors. Here you can buy everything edible under the sun: cow tails, pig ears, organs of all shapes and sizes, six different types of avocados, and blocks of unpasteurized queso blanco so large that they remind me of construction materials. Most of the vendors are pushy middle-aged men, and I feel uncomfortable trying out my fledgling Spanish on such an aggressively sale-oriented crowd. But I find one vendor, whose hands are stained red from the moras berries of his stand, who patiently answers my questions. Yes, his fruits and vegetables are from Antioquia (the region in Colombia of which Medellin is the capital). No, he does not know the farmers personally, as he purchases his fruits from a distributor, who is turn bought them from the farmers. But he can tell me that most of the fruit and veg here, at La Minorista and most groceries in Medellin, is coming from small farms rather than a Colombian form of agribusiness. All of the big farms, he tells me, are primarily focused on exports, because they have the scale and the quality to ask for the higher first world price. He offers my friend and me each a mandarin. The peel is still a bit green, and it is small, about the size of a squashed golf ball. It is indescribably sweet, a perfect morsel of fruity goodness. We buy a bag of mandarins, petite mangoes, and a pound of grape-like ochuvas, and the price is insanely cheap. I think of the farmer, and the various middlemen, and the cost of transport, and I realize that Colombia’s fertile soil and tropical climate is both a blessing and a curse, for while the earth brings forth an abundance, the farmers can’t possibly be bringing home more than pennies.

My trip to La Minorista shed light on my Exito expedition. The great difference between Colombian grocery stores and the stores in the states is that in Colombia, no one tries to sell you the story of your food. Accustomed as I am to the relentless barrage of food propaganda lining the walls of the average American grocery (cows frolicking, ambulatory vegetables smiling, small family farms puttering happily along), the sudden silence is jarring. Detached from the history of this place, I lack a frame of reference in which to situate my food. I come to the grocery searching for stories, and am met only by advertisement for lactose-free milk and low calorie cookies. The closest thing to American food propaganda that I find in Colombia is an ad campaign by Zenu, the biggest sandwich meat and sausage company, featuring stick figure cows, pigs, and chickens that ask metro riders to share the love (presumably by eating them). The animals remind me disturbingly of Horizon’s misleading chipper cows, but really, they aren’t making any false claims to animal welfare. Only false claims about the joy that processed sandwich meat can bring to your life. On the whole, Colombians have a much clearer idea of where their raw food comes from. Whereas, in America, we are largely detached from the act of producing food, in Colombia you ride past the granjas where campesinos harvest bananas when you take the bus from Bogota to Medellin.

This is not to say that the life of the typical Colombian campesino could be written about in the genre that Michael Pollan has labeled “supermarket pastoral.” Farmily farms these are indeed, but the statistics for income inequality in this country suggest that the gap between urban consumers and rural producers is a wide chasm indeed. When I go grocery story shopping in Medellin, I return home with a mixed bag. The flavor of the food here, from eggs to eggplants, exceeds anything I would find in an American grocery store. I find that Colombians, unlike many Americans, do not feel estranged from the land that feeds them. But farmers here, like small farmers in so many places, are struggling.  Sustainable agriculture, a practice that I believe passionately in, is not widely employed. And if I want to hear the rest of the story, I’m going to have to leave the grocery and go to the source.