Building a Sustainable Economy: Learning From the Nearings | Civil Eats

Building a Sustainable Economy: Learning From the Nearings 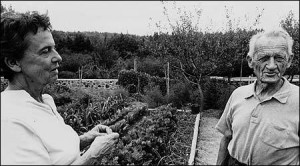 The stimulus package has passed – and despite whether you are pushing tax cuts or waving the flag of infrastructure spending, perhaps its worth reconsidering the underlying goal either version looks to achieve: growth.   I’m not the first to propose that our entire economic system is in need of an overhaul, but thinking back even further, I think we could take a leaf from Helen and Scott Nearing.

The Nearings moved from New York City to a Vermont homestead in 1932 because they perceived the capitalist economy was failing due to fundamentally bad underlying principles.  Essentially what they started in the New England countryside was a small farm, with a cash crop – maple syrup – which made enough money to help them buy building supplies, seed and necessities. Now, reading their book, Living the Good Life, during the current economic crisis, I cannot help but wonder the same thing they wondered then: Are we suppose to seek profit above all things?

Farming in America got a closer look last week when the ag census for 2007 debuted and we could crunch some hard numbers.  Total small farms (1-9 acres) increased by about 50,000 to 232,849 — 80% of whose farmers are making under $10,000; while 75% of the agricultural production (read: commodity crops) took place on 125,000 of the largest farms.  Here money and size correlate; our “Get Big or Get Out” mentality has produced giant farms — producing things we can’t eat without processing — which get a continuous flow of government subsidies, and grow in size as they buy up their neighbors in a quest for the almighty dollar.

But what I am most interested in here is those small farms, where more and more young people are gravitating, where organic is often practiced with or without certification, and perhaps most of what is being produced is used by the family unit or sold to neighbors.  These small farms might be a chance to learn, or an example of how land expense for a beginning farmer is just too great, or maybe these new farmers, too, have made a political decision to be self-sufficient.  But this phenomenon could be part of a real revolution going on in the way we think our society should be run, as well as a hat tip to the pioneering Nearings.

La Vida Locavore took a look at these small farms in detail last week, and saw that most farmers were turning a small profit or breaking even.  Now I know what I am about to say is controversial, but couldn’t this be considered a good thing?  I am not trying to insist that we all become peasants again, that we should give up coffee and chocolate, learn how to slaughter a chicken, throw out our laptop and iPhone and never, ever travel again.  Nor am I saying that the government shouldn’t be helping new farmers with land access and funds: they most certainly should.  But I ask, with a full belly and satisfying work, isn’t it time we re-frame our society’s expectations for growth of the bottom line at any cost?

Scott Nearing was an economist and social theorist who lost his job as a professor in the city due to his anarchist and pacifist beliefs.  Both Nearings had strong opinions about the uses of money, and self-sufficiency.  Here’s are the Nearings on the economics of consumption:

Life’s necessaries are easily come by if people are willing to adjust their consumption to the quantity and variety of their products. Difficulties begin when the subsistence advocate enters the market with its lures and wiles for separating the unwary and the dullwitted from their medium of exchange. Never forget that the private ownership of the means of production, through the monopoly of natural resources and patents, the control over money, the imposition of the tribute called “interest”, the gambling centers, which trade in commodities and “securities”, to price control and the domination by the wealthlords of the agencies which shape men’s minds and the machinery of government, the entire apparatus of a competitive, acquisitive, exploitive [sic], coercive social order is rigged and manipulated for the rich and powerful against the poor and the weak. Keep out of the system’s clutches and you have a chance of subsistence, even if the oligarchs disapprove of what you think and say and do. Accept the system, with its implications and ramifications, and you become a helpless cog in an impersonal, implacable, merciless machine operated to make the rich men richer and the powerful men more powerful.

The two things Americans value most are money and god, which often act to segregate us.  What then should we value in our society?  My answer would be community, quality and real justice for all living creatures; and food could be the most fundamental way through which we change our ways of thinking because it is a central front in our daily lives, and has the potential to bring us together.

That change is starting already, and Washington will have no choice but to listen from here on out.  According to the ag census, organics are growing in demand. (Collin Peterson, are you paying attention?) This speaks to the fact that we are becoming more concerned about the quality of the things we put in our mouth and the effect our food choices have on our community and environment at large.  Woody Tasch, an advocate of what he calls “Slow Money,” where the investor is concerned with building a stronger community, said in a recent interview that “there may well be a whole new, wider role for the investor as earthworm, rather than the investor as master of the universe.”

But first, as Civil Eats environment editor Aaron French reminded us in a recent post, we must define sustainability.  It seems we have been dragging our feet about this for fear that ridicule from the growth-focused economy would pummel anyone who dared say something bad about profit.  Well here goes: Using growth as the final and absolute indication of a healthy economy is bound to blow up in our face, whether by creating empty calorie foods to increase intake of commodity crops (leading to heart disease and diabetes, and a ballooning tax payer burden of health costs) or starting wars to increase sales of weapons (leading to an endless struggle and antagonizing much of the world in the process) or ignoring science so that we don’t have to act on climate change by regulating industry (at our future peril) – we can all agree these things are not sustainable.

In an article in the New York Times last weekend, Secretary of Ag Tom Vilsack was quoted encouraging diversification as a means to make small farms sustainable — focusing on energy production, carbon sequestration, conservation and ecotourism aside from crops and livestock, which he referred to as the “new rural economy.”  He also said last week that the USDA should represent “eaters” and not just farmers, which made many of us eaters cheer.  It is my sincere hope we continue to hold him to his word, because while the Nearings have set a fine example for homesteading, we must work together for change as we are linked through interdependence.  The food community must stay in dialog, pushing the fundamentals of our economy towards awareness, justice and quality for eaters everywhere.