The People Have the Power: Yoplait Goes rbGH-Free | Civil Eats

The People Have the Power: Yoplait Goes rbGH-Free 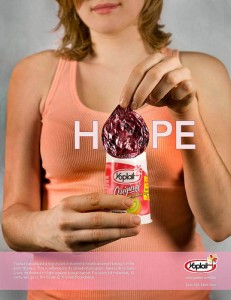 Yoplait yogurt, the 19th largest dairy processor in the country, announced today that by August of this year, all Yoplait branded products will be made with milk that is 100 percent farmer certified to come from cows not treated with rbGH (or recombinant bovine growth hormone) an artificial hormone also known as rbST (recombinant bovine somatotropin).

In an e-mail announcement sent out Friday, Yoplait noted that it’s the first leading yogurt brand to go “rbGH-free,” which may come as a surprise to companies such as Stonyfield, Nancy’s, Cascade Fresh, Brown Cow, and other organic industry leaders, all of which have been in the forefront of the movement to reject the synthetic hormone in milk products.

“It’s an honor to welcome them into the no-rbGH club,” said Gary Hirschberg, the Stonyfield CE-Yo. “Better Yo-Late than Yo-Never.” In 1993, Stonyfield was the first dairy in the U.S. to secure agreements with milk suppliers not to use artificial hormones like rbGH (trade name Posilac) soon after it was introduced.

The use of rbGH has been linked to increased rates of infections in dairy cows, elevated antibiotic use, and unresolved questions about its links to serious human health risks, including cancer. Canada, Australia, New Zealand, Japan and all 25 members of the European Union have banned the use of rbGH, and the Codex Alimentarius, the United Nations’ main food safety body, twice decided that it could not endorse the safety of rbGH for human health.

In case you can’t recall why U.S. companies have been pumping cows full of this junk for 16 years, just a small reminder that rbGH was brought to us by Monsanto, which has much sway in our government. (For the seminal article on the chemical giant, read the piece in Vanity Fair.) And, in yet another winning decision by the Food and Drug Administration (FDA), the agency gave its seal of approval, despite serious questions about the safety of rbGH.

According to the Breast Cancer Action (BCA), when rbGH is injected into a cow, that cow’s milk will contain higher amounts of another powerful hormone called insulin growth factor 1 (IGF-1). IGF-1 is natural and necessary, but too much of it may cause health problems. Studies have shown that elevated levels of IGF-1 in humans may increase the risk of breast cancer. More research is needed to better understand whether the elevated levels of IGF-1 in milk make their way into our bloodstream. Although it hasn’t yet been proven that the use of rbGH will definitively lead to breast cancer, BCA notes that the current evidence is cause for concern and for action.

Slight problem: Yoplait, owned by General Mills, marketed its yogurt as being healthy for women, and participated in breast cancer awareness projects, including pledging a 10-cent donation to a breast cancer organization for every pink lid consumers mailed back to the company.  Because Yoplait yogurt was made with milk from cows injected with rbGH, there was a contradiction in their message.

Yoplait’s move away from rbGH can be linked in large part to the BCA’s Think Before You Pink campaign—which demands transparency and accountability on the part of companies that align themselves with breast cancer and urges companies to do all they can to ensure their products don’t contribute to the high rates of the disease. BCA uses the term “pinkwashing” to describe companies, like Yoplait, that participated in breast cancer fundraising or “awareness” campaigns but manufactured products that may be linked to the disease.

One of the reasons the Yoplait campaign was successful is due in large part to consumer education efforts by organizations such as the Oregon chapter of Physicians for Social Responsibility. “When Yoplait says that they’re dropping rbGH because of consumer demand, they’re not kidding,” said Rick North, PSR’s Project Director for Safe Food, who has been on the frontlines of this effort. “They’ve received thousands of postcards from all over the country opposing rbGH and also letters from hospitals and colleges expressing their displeasure with the hormone. This was not only the right thing for them to do, it was the smart thing.”

As it turns out, Americans don’t want their milk messed with. A recent Consumers Union poll [PDF] revealed that 70 percent of consumers polled are concerned about dairy cows being given synthetic growth hormones and 93 percent of consumers agree that dairies that produce milk and milk products without artificial growth hormones should be allowed to label their products as being free of these hormones.

Consumer demand for rbGH-free dairy led big retailers like Wal-Mart, Krogers, Starbucks, Tillamook, Safeway and Chipotle Restaurants to get on the milk wagon and phase out the hormone in all of their dairy products. California Dairies, Inc., which produces nearly 10 percent of the nation’s milk, went rbGH-free last year. And, by the end of summer 2009, the New England dairy industry will be rbGH-free as well.

Faced with dwindling sales of rbGH, Monsanto tried to thwart informed consumer choice by pressuring the FDA and Federal Trade Commission (FTC) to restrict labeling of such products as “rbGH-free.” That didn’t work out too well, so Monsanto and their supporters launched a state-by-state assault attempting to ban or restrict rbGH-free labeling in Pennsylvania, New Jersey, Ohio, Indiana, Kansas, Utah, and Missouri. So far, these attempts have not been successful, as dozens of farmers, environmental and consumer groups joined forces to beat them back. Still limping along, a bogus non-profit called American Farmers for the Advancement and Conservation of Technology (AFACT) was formed last year to join the battle. This “grassroots” group received funding from Monsanto and was formed by Osborne and Barr, a PR firm founded by two ex-Monsanto employees. Seems that AFACT is actually ALIE.

In the meantime, stay tuned and ready for action to make sure your favorite dairy can continue to label their products “rbGH-free”. Be sure to buy rbGH-free milk from one of the aforementioned brands, and even better, buy organic. Click on your state to find a list of rbGH-free dairy brands at Sustainable Table.