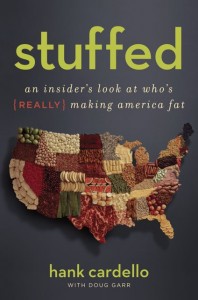 Hank Cardello knows a great deal about the food industry; for more than three decades, he helped some of the world’s largest companies sell their products to you.  In his book, Stuffed: An Insider’s Look at Who’s {Really} Making America Fat, Cardello shares his vast knowledge about the industry in a readable, organized and highly accessible fashion — and attempts to make up for his past sins with a critique on the system he no longer works for.

Cardello opens with a bit of history about the creation of the Swanson frozen turkey dinner, and its impact on the food industry.  He writes that in this “one single moment, the face of food” in America began to shift.  As an historian, I like to think about longer trends and arcs, but fixing on that turkey dinner (my husband recently confessed to having loved this TV dinner as a child) is certainly a great hook.

For the purposes of the book, Cardello breaks the food industry into three segments.  “Packagers” are food manufacturers, like Cardello’s old employer, General Mills.  “Merchandisers” are supermarkets; they are described as “the gateway to the food industry.” Obviously, packagers and merchandisers have a great deal of interaction.  And restaurants are referred to as “Operators.”

How the food industry works was, for me, the most valuable part of Cardello’s book.  He was an insider for more than three decades, an integral part of it.  The book moves with assurance and authority in those sections that describe the nuts and bolts of the food industry.  Chapters discuss, for example, how food executives think, how purchasing agents make us fat, food legislation and “the nanny state”, school food policy, and consumer behavior.

I made a quick trip to Vons Grocery, immediately after reading the chapter titled, “What Grocers Don’t Want You to Know.”  My awareness of displays, advertising, and the shopping behavior of others (and myself) was greatly heightened.  Cardello was spot on about this.  I found myself evaluating the “arc of activity” (Cardello explains that this is the six inches above and below five foot six, which is the average height of women).  What Cardello shared about “power items” (bread, milk, meats, eggs) is true, and like other shoppers, I found myself pulled through the store to reach these essential items, which are located in the back.  Every consumer ought to read this chapter; it alone makes the book worth purchasing.

Cardello has many valuable things to say and I would highly recommend this book to others.  However, by no means do I agree with everything he writes.  In fact, I would urge readers to be cautious consumers, and to carefully evaluate some of Cardello’s arguments, particularly those relating to public policy.

One conclusion Cardello draws that I strongly disagree with is contained in the chapter entitled “How Big Brother Can (Really) Help.”  Cardello argues in more than one place that government is not the “right institution to force the industry’s hand.”  He says that the “blunt arm of legislation will only make the transition…harder.”  He suggests that based on “priority public health issues” – which the government should determine – general guidelines should be set.  Sounds great.  But Cardello then argues that the “guidelines should push the industry to solve the problem rather than advancing legislation that results in unintended consequences.”   He argues that we ought to “give businesses the opportunity to take the high road,” and ultimately, let the food industry “be the agent of change on the issue of health and food.”

Huh?  This model has not worked so well in other sectors of the American economy lately.  Has there been evidence that the food industry, by and large, has already demonstrated its willingness and ability to do this?  Hmmm.  Call me naïve, but I don’t trust that many corporations will place American health above their bottom line, unless they’re forced to by regulation and oversight or the sheer weight of consumer disfavor. Clearly, the idea that the food industry would voluntarily improve the healthiness and nutrition of their products, at least by and large, hasn’t panned out so well for consumers, at least to date.   And unlike Cardello, I don’t think that food systems activists are well-intentioned individuals/agencies/organizations whose work is creating unintended (and unfavorable) consequences.  Unfavorable to who, exactly?

To his credit, Cardello does indicate that should industry fail to police itself, government should intervene. He truly believes voluntary measures will work, and holds up his old employer, General Mills, as an example of hope “that the right thing can be done” by food sellers.  I want to believe Cardello.  Really, I do.  But history indicates otherwise.   More than a hundred years ago, when segments of the food industry wouldn’t and couldn’t clean themselves up, the federal government stepped in with landmark legislation in the form of the Pure Food and Drug Act in 1906, which began the era of labeling food.

There is some extremely good information in the book; I learned a great deal.  But despite his own health scare, and the new kind of work Cardello does, he is certainly not strongly challenging food industry orthodoxy.  He does, however, do an excellent job of highlighting key issues relating to food systems, including obesity, access, school lunch programs, portion sizing, economics, etc. Cardello also notes that all of us are complicit in the current problem.

Stuffed was a quick, fascinating and extremely provocative read.  I was alternately sucked in by Cardello’s clear and detailed description of how the food industry works, and alarmed by some of his conclusions and recommendations.  I found myself making all sorts of notations with a pencil on its pages.  My notations included words such as: agree; disagree; gross; great idea; and wrong.  When I make copious notes in its margins, it’s generally a sign that a book has challenged me, made me think, and will likely impact my thinking and behavior.  I’d strongly suggest that people read this book for the nuts and bolts information it provides about the food industry, as well as for some provocative ideas.  Readers will learn a great deal.  But taking all of Cardello’s public policy recommendations to heart?  Perhaps not so much.

There is one argument that Cardello makes with which I am in wholehearted agreement:  these are profoundly complex matters and issues that will require a great deal of cooperation and out-of-the-box thinking to resolve.

Rose Hayden-Smith serves as strategic initiative leader in Sustainable Food Systems for the University of California’s Agriculture and Natural Resources division.  She also serves as a 4-H youth, family and community development advisor for UC’s Cooperative Extension office in Ventura County. Her work focuses on providing gardening and food-systems education to youth, educators and community audiences. Hayden-Smith uses historical examples to influence current public policies relating to food systems and nutrition. She holds Master’s degrees in education and U.S. history, and a Ph.D. in U.S. history and public historical studies from the University of California, Santa Barbara. A practicing U.S. historian, she is a nationally recognized expert on Victory Gardens, wartime food policies, and school garden programs. A Kellogg Foundation/Institute for Agriculture and Trade Policy Food and Society Policy Fellow (FASP), she is the creator of UC’s Victory Grower website and blog. Read more >