Food Matters: But Will Everyone Get the Message? | Civil Eats

Food Matters: But Will Everyone Get the Message? 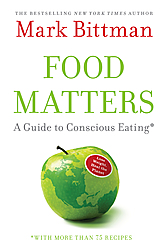 Veteran cookbook author and New York Times columnist Mark Bittman knows his food — and what he dishes out is smart, contemporary and consistently delicious. For years, his books – including “How to Cook Everything” and “The Best Recipes in the World” (his “Chile Shrimp” is one of my husband’s all-time favorite dishes) have been permanent fixtures on my book shelves, and his kitchen savvy has informed my own style of cooking.

Naturally, I was excited to read his latest work, “Food Matters: A Guide to Conscious Eating,” released just as 2008 came to a close. In keeping with so many of Bittman’s other books, the recipes are appealing, straightforward and relatively accessible for busy, health-minded home cooks. But this time around, Bittman gives us some food for thought in addition to his recipes.

The relatively small book (his “Everything” titles are encyclopedic tomes) is divided into two parts, with the first half focused on a complex, interrelated web that includes the state of our industrialized food system, our resulting eating habits over the past generation, our collective physical health and the health of the planet. “For our own sakes as well as for the sake of the earth, we need to change the way we eat,” Bittman asserts at the end of his intro.

The following 70 pages support his argument that we must reclaim our diets and practice “sane eating,” but, he says, it’s something we must do ourselves, not “expect Big Food or the government to help us fix it.” For an avid reader of sustainable literature, he’s preaching to the choir, and I’m mumbling “Amen” as I work my way through the book. But – and here’s a big but – does (or will) this message, as delivered, resonate outside my food-obsessed universe, among the die-hard meat lovers who dunk donuts into their morning coffee and for whom the words “organic” and “sustainable” may as well be Greek?

Here’s what food writer Fuchsia Dunlop says in her recent review in the Washington Post Book World: “One suspects that Bittman is preaching to the semi-converted. The real challenge, surely, lies in persuading people who don’t read such books to invest time in preparing food for their families and reminding them how to do it (an immense task, as the British TV chef Jamie Oliver showed in his recent “Ministry of Food” series).”

There’s no doubt that Bittman’s heart (and message) is in the right place, but this book feels like two halves of two different books grafted together, asking lots of questions but offering relatively few answers. Well articulated, Part One’s plea to change our food system makes us hungry for an action plan, which is not fully realized in Part Two. Although the second half plays to Bittman’s strengths as a cookbook writer, the month of meal plans and accompanying recipes feel awkwardly attached to a political essay and without context to the mission which he clearly spells out on page 69: “Eat less meat, and fewer animal products in general. Eat fewer refined carbohydrates, like white bread, cookies, white rice (although try telling that to a family whose diet is based on the convenience of highly processed foods) and pretzels. Eat way less junk food: soda, chips, snack food, candy, and so on. And eat far more vegetables, legumes, fruits, and whole grains – as much as you can.”

I’m wondering, for example, why he doesn’t offer sustainable sourcing suggestions for the bacon in his yummy-sounding spinach and sweet potato salad with warm bacon dressing. (There’s an extensive bibliography but no list of resources, as is thoroughly done in “Eat Where You Live,” by Lou Bendrick) And why, if he “assumes, however, that if you want a grilled steak or a bowl of ice cream you won’t be looking here to find it” does he include a recipe for Thai beef salad, which calls for grilled flank steak?

As I’ve already mentioned, Bittman had me at “hello,” and I reckon you feel similarly, fellow Civil Eats fan. But what about the majority of Americans left out in the pasture scratching their heads about what the next step is supposed to be? For those just getting started on this “sane eating” journey, a bit more guidance may be in order. His “shop where you like and buy what looks freshest and most appealing to you” advice on page 104 is sound, but leaves the reader without a road map or a wellspring from which to jump. And how do you rally the eaters living in a food desert – rural areas with nary a farm market in sight or in the inner city where supermarkets are more an exception than the rule?

A noble attempt indeed to connect the dots between manifesto and mealtime, but the lines in this case are fragmented still and leaving us wanting more.