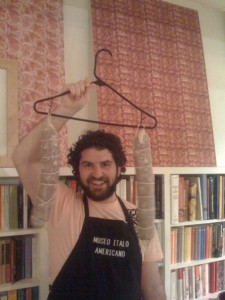 Pig Day starts early in the morning with a rushed drive to pick up a beast and haul it back to our house in Oakland, California. Usually the rendezvous with the our pig is at a farmers’ market or a collaborating restaurant. We pick up the animal – whole and gutted – and realize again that a whole pig is a nastily unwieldy thing as we struggle to get it into the car. At this point, my husband Renato’s grumbling – which has been a low gurgle for the few days preceding Pig Day – grows louder.

We butcher a pig and make cured meat once a year. That’s just frequent enough to feel confident you know what you’re doing, but infrequent enough to actually forget most of what you learned from year to year. So each year we tackle our beast with renewed amateurism, yet – surprisingly – each year our products get a little better. Yet Renato remains unconvinced.

I started butchering and processing whole pigs four years ago when I first moved back to the US from Italy with my husband. I had gotten used to eating fresh sausage and simple cured salamis every day, and couldn’t find much in the Bay Area beyond expensive charcuterie plates in local restaurants. Renato’s approach to the dilemma was to eat less salami. My approach was to buy a pig.

He always loves my abundant American optimism and hyper-craftiness – but this was going a little too far. Renato’s grandfather sold salami for years, and his uncle has a casing-processing business, so he kind of has it in the blood. Or did. Renato’s fathers’ family was very proud they lived in town and didn’t have to make salami or keep animals, they had butchers for that now. Renato’s argument: “Why come to America and go back 40 years?”.

We’ve gone back and forth on this. A crucial moment of concession is usually a week after pig day when we slice the first mortadella and Renato gets a little misty-eyed. And when we bake a hot chickpea pancake in the oven and cover it with thin slices of our fresh raw pancetta, Renato is definitely waving pompoms for Team Pig.

Since we moved to California, the local cured meat trade has blossomed, with Fra Mani, Boccalone, Fatted Calf, and others selling great products made from good-quality meats at loads of markets and stores – so we don’t really need to make our own any more. But I’ve gotten kind of hooked on Pig Day. One thing I like is the affordability of it, I buy a whole pig for $300 to $400, pay about $60 for spices, cultures, casings, and cures, and end up with around 90 pounds of cured meat. I give away about 20-30 pounds to the team who works on Pig Day, but at the end of the day I pay about $5-7 per pound for organic, hormone-free, sustainable, and – absolutely – artisan sausage, bacon, salami, mortadella, head cheese, pate, rendered lard, and more. I have a few tools that help: a 5-gallon chest freezer ($129 at Home Depot); a FoodSaver vacuum packer ($60 at Bed Bath and Beyond); and friends who loan us a good grinder and stuffer (the first two years we didn’t borrow equipment, we a used Kitchen Aid attachment and then borrowed the kitchen of a friendly restaurant). We also borrow a few key things from friends like a gram scale for measuring ingredients, a space heater, and a humidifier for the salami curing. I should note that I have a large kitchen and am prone to industrial-scale cooking endeavors, so I have a few things like big mixing bowls, tubs, a meat saw, and a meat slicer (that’s all – I swear).

Pig Day 2009 started at 9am on January 11. Seven friends show up with knives in tow – five of them veterans of past Pig Days. I made scrambled eggs, cornbread and coffee, and we started “leaning out” the carcass – separating the meat from the fat. This is necessary to be able to measure the proportions for each of the products we’re making, and also to remove the unwanted types of fat, veins, and silverskin from the meat. We spend the first four hours cutting up everything based on the five major recipes we’re preparing, four from Paul Bertolli’s book Cooking by Hand and one from Stéphane Reynaud’s Pork and Sons. The head cheese is prepped in a gigantic pot, and I grind and prepare the paté for many hours of baking. We’re also improvising a bit, trying out three new salamis based on Italian recipes found online or remembered flavors (Nduja, Lomo, and Mortadella Campotosto).

Around three pm, the stuffing and tying begin, and by five the salami are ready to go into a tarp-covered coat rack with a heater and humidifier stationed inside where they’ll ferment at 70 degrees for three days. Then it’s on to fresh sausage, which we stuff into yards of casings and tie off into links – they’re ready to vacuum pack and freeze by eight pm. During the day we snack on all sorts of porky goodness, from pancreas sizzled up in on the fire to endless bites of sausage filling cooked in a frying pan. When we sit down to dinner around 9, we’re famished and a little woozy, and relish the fennel cooked in lard, piles of fresh sausage grilled in the fire, and paté warm from the oven.

All the helping hands take home fresh sausage, paté, and the promise of a pork binge dinner party a few months down the road when the salami is ready. It’s really exhausting physical labor, and afterward you feel it in your body for three or four days. But that labor, and the sense of really working for your food, is what makes Pig Day amazing. Renato’s grumbling has become a running joke, especially as he dashes around on Pig Day looking for a missing spice to pick up at the store – anything to avoid the pig. But even he’s – slowly – shifting. This time, reflecting on Pig Day last week, Renato said it reminded him of the reconnection to agricultural traditions cities like Oakland need. We both talked about the camaraderie of the group – it’s not too often you get together with a group of friends and work 12 hours straight making food. Now, in his fourth year living in urban America, it might be that Renato’s ready for Pig Day.

Want to know more? Bonnie Powell far more eloquently about Pig Day II in 2007 on Ethicurean, check it out here.