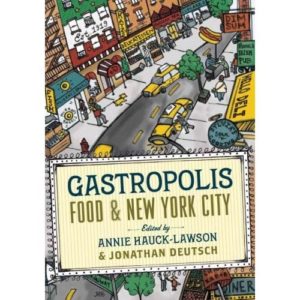 I sat down with Annie Hauck-Lawson and Jonathan Deutsch over pancakes at the NYC icon Tom’s Restaurant in Brooklyn to discuss their delicious new book, Gastropolis: Food and New York City.

We may think of NYC’s iconic foods like knishes and egg creams (and diner pancakes) as fixed, but this collection of essays makes the case for the ability of each individual, each immigrant wave to leave its imprint on the ever-evolving foodscape of this city.  In fact, the archaeological remains of old New Amsterdam itself reveal how shifting ecology, shifting economy, and shifting populations can change the course of eating history and culture.

Hauck-Lawson and Deutsch have put together a collection that ranges in tone and approach, from Jessica Harris’ story of her personal food heritage to a history of the streets’ peddlers and markets to an examination of Roosevelt Avenue in Jackson Heights and its array of Central and South American cuisine.  But it does not attempt to capture everything.  The authors acknowledge the impossibility of that, instead presenting what they call “noshes,” little bits that ultimately fill you up as richly as a big meal.

“I would say that this book would be great required reading, especially for new New Yorkers,” Hauck-Lawson said, “as an accessible source of New York City food history and foodways and out of a measure of respect for the privilege of being a New Yorker.”

JK: This book provides a palpable and textured portrait– past and present– of New York’s foodscape, what Annie has called its “food voice.” Can you describe what that term means?

AH-L: What people eat and how they eat it can tell us a lot about identity and culture.  Food has such capacity to hold meaning, that is can function as a channel of communication and a form of expression of individual and group identity.

In addition to consumption, other food-related activities- raising, gathering and procurement, production, preparation, and post-consumption refuse, recycling, composting, contribute richly to the food voice, as well. Immigrant New Yorkers bring sustainable practices from their homelands and interpret them in their new land. My own family’s unwavering practices of growing, gathering, preparing, preserving, and composting food here are described in the chapter, ‘My Little Town: A Brooklyn Girl’s Food Voice’.

JK: Although this is a scholarly book, it is, in most places, very personal.  Is that inevitable with food–that it becomes personal?

JD:  (overlapping) Yes.  I think you can’t write about food without expressing yourself.

AH-L: I’ve observed some people, even in my professional work as a Registered Dietitian, who seem indifferent to food. Some seem wrapped up in nutrients, but cold towards their natural sources. Voices here may, in fact say “I am detached from food.” That is a food voice too, and it is personal even if it speaks towards detachment and separation. And I personally say, ‘Keep the food in nutrition.’

JK: It seemed like some pieces were written specifically for this collection, and some were not. Can you describe a little bit the process of putting the book together?

AH-L: We had a very strong and clear vision for the book going into it.  We met with each contributing author and worked together to help shape it into the chapters that we envisioned.

JD: Nothing in the book has been previously published.  Some pieces are part of larger projects—such as dissertations—but nothing in here is recycled from other publications or collections.

JK: With a lot of food writing there can be a kind of nostalgic attempt to recapture a past time. This collection has both—pieces that try to re-tell New York food’s history (as well as personal histories) while also focusing on its ever-changing present.

JD: It’s interesting to note that New York City does not actually have a sustainable food past—there was tainted milk, dirty water, pestilence and disease.  Some might think that what Slow Food does is looking back to a past way of doing things, but in many cases—like New York City–it’s not a nostalgic return to the past, it’s forward-looking work.

AH-L: And I’ll chime in that individually practiced or small scale sustainable efforts in our unusual urban setting of New York City deserve to be highlighted and protected so that others may learn from them and adapt them to their own practices. I grew up with a boatload of sustainable practices–such as composting– that my grandparents brought from different parts of Europe and practiced here, and believe me, they continue through four generations.

JK: And further, past and present isn’t the only set of opposites the book wrestles with.  The book really negotiates New York City’s seeming contradictions—haute cuisine and street food, abundance and scarcity, rich and poor.  You end the book with Mitchell Davis’ piece on eating out and restaurant culture, directly followed by Janet Poppendieck and JC Dwyer’s examination of poverty and hunger.  Can you talk about your decision to end a book about food with a piece on food insecurity?

JD: For people who don’t have enough food, food is the most important thing. Not having food is a lived life here in this city, and the role of food for those people is so much more important than everything else.  Following the operating hours of pantries and soup kitchens become as important for the food insecure as reading restaurant reviews is for the affluent restaurant goer.  It is important to show that New York City is not a food utopia—there are great things about food in NYC but there’s also hunger.

AH-L: I love how Poppendieck and Dwyer evoke Calvino’s image of Valdrada [a city built on the shores of a lake, thus creating a second city, its reflection in the water, the city “so constructed that its every point would be reflected in its mirror” –JK].  It was fitting to end the book that way because it shows both parts of the city: the sparkly abundant city and a more slippery underside containing scarcity and hunger.