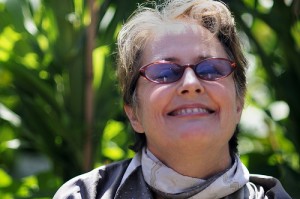 Alice Waters is taking a lot of heat in blogger land of late. From The Feedbag’s question “Has the locavore taliban finally been checked?” to NPR’s Monkey See blogger Todd Kliman noting Alice’s “inflexible brand of gastronomical correctness” to Anthony Bourdain’s equating her with the Khmer Rouge (I mean, can you see Alice carrying an 8.5 pound AK 47 when she couldn’t even do the Heimlich maneuver on Joan Nathan?) Alice is getting shredded in the Cuisinart of the Anti-Politically Correct. And some people would say, rightly so. Apparently, her local food obsessive-slightly fascistic behavior and precious organic-y grandeur has rubbed the wrong kind of salt into the wrong people’s wounded sense of self-righteous apathy.

In an article in the Washington Post this past Sunday, Jane Black, who wrote rather glowingly about the Kumbaya-ness of the Slow Food Nation event that took place in San Francisco back in August 2008, now seems to have turned a more specious eye upon the pre-inaugural dinners organized by Alice Waters in Washington DC. Thrown by private citizens in private homes, celebrity chefs (such as Daniel Boulud, Tom Colicchio, Lidia Bastianich, Floyd Cardoz, Nancy Silverton, Rick Bayless, José Andrés, Dan Barber) came in from around the country to cook on the Monday night before the Inauguration as a way to raise much needed funds for two Washington soup kitchens, Martha’s Table and DC Central Kitchen, and also FRESHFARM Markets, the organization that supports farmers’ markets in the Washington DC region. The dinners have received criticism for being at best irrelevant, at worst, down right elitist.

Patrick Martins, founder of Heritage Foods USA, who was at the infamous Joan Nathan dinner (and no, he didn’t see Colicchio perform the Heimlich maneuver on Ms. Nathan), just shakes his head upon hearing these petty Alice criticisms. “Whoever is saying these things, they should take a good look in the mirror and ask themselves, can they do better? No one else is stepping up to the plate.”

In the Wa Po article “Go Slow Foodies. It’s the Way to Win,” Black started the ball rolling by asking: “Can the combination of Barack Obama and a $500-a-plate meal of grass-fed beef in a rustic guajillo chili sauce and a warm tart of local apples and pears change the world? Or at least the way America eats?”

Can you guess what I am going to write next? Yes It Can!

Reichl was part of the committee, or “kitchen cabinet” as like might call themselves, (along with Waters and Danny Meyer) that organized these dinners and was happy to go on Leonard’s show if for no other reason than to tell the naysayers who cry “Elitism!” that eating good food is not an elitist act, that good food should be had by all, and the best way to get that message across is to take it to the kitchens of Washington DC.

Reichl said on the air: “When I started writing about food in this country, nobody seemed to care. And so it’s very exciting that people now care.”

So who cares? And what does that mean? It is easy to dismiss these green apple gelee and celery root remoulade glorified meals as oh so rococo and, to some cynics, a bit Marie Antoinette-ish, but at their heart (sunchoked if you will) there is substance to these dinners that can’t be blithely washed away with a decent bottle of ‘93 Hermitage.

In fact, a good many people of influence, media and otherwise were at these parties (Carl Bernstein, Bob Woodward, Mora Liason, Rachel Maddow just to name a few) along with Obama-ites like Zeke Emmanuel, Chief of Staff Rahm Emmanuel’s older brother and Chair of the Department of Bioethics at the NIH who came straight from celebrating with the Obamas to sit next to Reichl at Nancy Silverton’s dinner. Presumably these dinners, which received quite a bit of media attention, have started a conversation about food in this country that might now be on the radars of mainstream media in the future.

So if people care, then what are they going to do about it? Reichl asks that elephant-in-the-room question of the day: “how can we change things in this country so it’s not something that happens to rich people but is instead a prerogative for everyone in the country?”

Per Black’s article, the complaints continue: “They don’t have a central, core message,” says James Thurber, an expert on lobbying and the director of American University’s Center on Congressional and Presidential Studies. “What policy are they trying to change?”

Reichl’s answer: “We want to change it all! Who doesn’t think obesity is a problem or pesticides is a problem and social justice for farm workers is a problem — these are all things that need to be changed and many feel that the opportunity is finally in sight.”

Liz Falk, DC markets manager of FRESHFARM Markets, one of the recipients of the funds raised that evening, said this: “Recognizing that the lack of focus of the local food movement is understandable since food is so ubiquitous at every level, from policy, society and fair access issues, to business and support of small family farms, to the environmental impact… it is difficult to know where to start. And as such, we should want a whole lot more than validation from the White House and President Obama.”

Back on The Lopate Show, Kim Severson commented that she feels a larger food movement is afoot, “a second food revolution is in the air. Everything he [Obama] eats has been scrutinized. They all think Obama is their guy. I think they are overly optimistic but I know a lot of progress has been made.”

Reichl made a pass at one specific change this fall by supporting a letter written by Alice Waters last fall asking the Obamas to consider a change of guard in the White House kitchen. Both she and Waters and others were asking for a chef that uses local and organic foods. But the Obamas decided to stay with the chef already in the White House kitchen, Cristeta Comerford, and, as it turns out, Comerford has been cooking with organic foods all along for the Bushes. Oops.

Much bru-ha-ha has since been made that Reichl and the Gang were, to quote former White House Executive Chef Walter Scheib, treating Comerford like “so many pounds of chopped liver.”

Reichl had her chance to respond on the show.

“No one is beating up on her. The point of the letter was not that she wasn’t a great chef but that the position should be rethought, that it should be redefined as a bully pulpit who can talk about good food….They didn’t talk about the Bush’s eating organic food … They hid it and that’s the point. They were afraid they would be seen as elitist… This is a country that feeds their children pure junk while the President eats organic food. He didn’t want to say he was eating so much better than anyone else.”

And just yesterday, New York Times writer Marian Burros came out with the surprise announcement that yes indeed, Sam Kass, the 28 year old founder of Inevitable Table, a private chef service in Chicago, has joined the White House kitchen. His work with local, sustainable food should please even someone as picky as Alice Waters.

So as for the Bush’s Let-Them-Eat-Industrialized, Mercury-Tainted-High-Fructose-Corn Syrup-Cake philosophy, let’s hope the Obamas request the cake be made with organic flour.