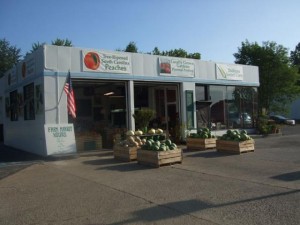 Over this last year, I’ve noticed a subtle shift in the Indianapolis food scene. New markets and restaurants touting local and seasonal foods, local business, community and economy reminded me that there are cities and towns beyond those on the coasts engaging in the conversation about the food system. I also noticed that these new endeavors are inspiring new generations of Hoosiers to be more conscious of the food they eat.

Now, I’m pretty sure that when people think of Indy they don’t readily associate it with a specific food culture as they would with Kansas City’s Bar-b-que. What it has always been though is a very traditional, Midwestern meat and potatoes city with the highest per capita of chain restaurants. It’s a common matter of discussion (boasting even) among Hoosiers that chains test their concepts on the folks in Indy who have a high level of respect for a good burger and an efficient drive-through.

I have deep roots in Indy. Though I currently live in San Francisco and have for the last 15 years, I lived in Broad Ripple for 18 years. I hung out at the Broad Ripple McDonald’s on weekends, Noble Romans after basketball games. I worked at Bazbeaux Pizza when it was still in the little ramshackle blue house. I’ve eaten in loads of Indy’s independent restaurants from Amici’s to Korey’s, from MCL to Shapiros. And, I’ve had burgers, pies and egg rolls at all the chains. My Dad also used to take me to soul food restaurants and the tiniest little diners with the sweetest ice tea you’ve ever tasted.

These days, now that my parents are older and my three siblings there to stay, I visit Indianapolis often. My participation in the food revolution has developed over the years thanks to fine restaurants and farmers markets in San Francisco, world traveling, WOOFing, and my own kitchen experiments. My awareness and education has also forced me to consistently seek out the fresh and natural in Indy.

Last spring I noticed signs for the Broad Ripple Farmers’ Market near my parent’s house and in the Forest Hills neighborhood.  Although I usually visit in the spring so I can catch some thunderstorms, I had never seen the signs before nor had I been to the market which is in the back parking lot of my old high school. Turns out, the market isn’t new; my awareness is. It’s been around for 12 years and has slowly grown to over 40 vendors.

When I am back, I am also so grateful that I can buy local cottage cheese and eggs at the Good Earth Natural Food Company, which has been around since 1971.  And the success of the Broad Ripple Farmers’ Market, both for the community and the farmers, inspired a new Winter Market in Fall Creek Place, a neighborhood two miles north of downtown in the midst of an urban redevelopment project that’s slowly transforming an area that was once called “Dodge City” by the locals (because you were always dodging bullets on your way to the northern suburbs).

I met my pals Betsy and Carl and their daughter Adeline at the winter market just after the new year. We intended to have fresh roasted market coffee and a stroll.  They showed me around the small but incredibly lively place. I was told there were considerably less vendors there than on a usual Saturday since it was a holiday weekend. But I noticed a lot of value added products like tomato sauces, herb spreads and natural cleaning products. I bought some potatoes, a winter squash, fresh free-range eggs and grass fed beef for burgers that night.

Betsy and Carl, who just moved back there after living for a long time in San Francisco, kept begging me to move home. “See! Indy has some great food stuff happening!”

Another example was Goose Market, just a year old, and also in the heart of Fall Creek Place. It’s a new neighborhood meat market owned and operated by Chris Eley, an Indy native who moved back home from Chicago to be near his family. An active member of Slow Food Chicago and a chef who’s worked around the world, Eley heard about the retail space from his sister who lives a few blocks away and thought it was the perfect place to build a business that supports local heritage breeds. He sells grassfed beef delivered from the farmer and slaughtered hours before and is close to realizing his dream of making house-made charcuterie. I had one of the best sandwiches I’ve ever had in Indy there and the place was packed on a Tuesday at lunchtime.

“Goose is a very urban market focused on the young professional who lives in the neighborhood and wants to support the local economy,” Chris told me. And, support it he does. They have an entire basement devoted to value added products from local farms and producers like Apple Family Farm, Local Folks Foods, Seldom Seen Farm, New Day Meadery and a host of local breweries. I was so happy to buy a whole hormone-free chicken that I decided to make roasted chicken that night which resulted in an impromtu taste comparison to the roasted chicken my Mom ate the night before at MCL. She never realized chicken could taste so good.

In Broad Ripple, I was surprised to see the total transformation of an abandoned gas station into a market shop selling and promoting local produce, raw milk, cow shares, and preparing meals to go. Opened in April 2008, Locally Grown Gardens is the brainchild of Chef Ron Harris, a student of Larry Forgione and the former Executive Chef of MCL who brought locally farmed strawberries to their menu. “The great thing is that he lists what’s available each month on his chalkboard. I know what I can buy there,” said my pal MaryLee Pappas who shops there regularly and lets the produce inspire her menus.

Chef Ron thinks that the Indy food scene is evolving back to its local farm roots thanks in part to the popularity of food shows like “Top Chef” and Gordon Ramsey’s “Kitchen Nightmares.” “Alice Waters, Jeremiah Tower and Wolfgang Puck [are] just starting to gain influence here,” said Chef Ron. “Curiosity about food is increasing and that impacts the knowledge base. My students at Tech High School’s culinary department were talking so eloquently about tomatoes. It was beautiful. The exposure to food these kids have had in just the last five years has impacted their knowledge base and has increased their curiosity. Think of Martin Luther King. We may not see the changes we’re making today, but generations that come will see it. The awareness of my customers and the students is touching a chord. I’m 40, so it’s the 20-year-olds, the youth movement that is key.” This summer Chef Ron plans to create a garden in the abandoned lot next door and sell homemade ice cream.

And yet, there is even more happening in Indianapolis. Everyone is raving about R Bistro and their seasonal menu, last November Alice Waters spoke about the Edible Schoolyard at the Indianapolis Museum of Art to a sold out crowd, and the recently established Indiana Artisan Development Project is moving swiftly to support local farmers and value added products that promote a distinctly Indiana product.

Plus 27 high school students and three teachers from University School in Carmel, a northern Indy suburb, sat at Park Chow restaurant in San Francisco with myself, Gordon Jenkins and Vera Fabian and got a lesson in what it means for a restaurant to source locally and use compostable paper products. Their teacher asked us to explain what compostable meant.  And, the kids seemed eager to understand. My old high school friend, and their teacher, Wes Priest, told me that most of the students said the dinner with us was a highlight of their trip, and that now there is a movement to get a garden started at their school.

Indianapolis is a city rooted in the Midwest farming culture. The people are earnest, honest and they sincerely want to make a difference in their communities.  For a city that I’ve always viewed as a little behind the times in terms of food culture, good food access, and awareness of the “food movement” in general, I have been pleasantly surprised to discover new businesses and an excited and curious community. If folks in Indianapolis can get on the bandwagon, we’re all that much closer to igniting the whole nation and pushing the food justice agenda towards policy makers in D.C.

This is the first post in a series called City Slicker Eats, featuring cities all over the United States that are re-building the food system from the ground up.  Are you a food fighter-writer with a city to feature, or do you just think your city is doing great things to build a more sustainable food system that you think we should cover?  Contact us, and tell us about the growing food movement near you.